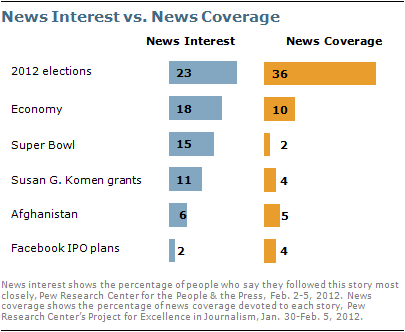 With a critical Republican primary in Florida, the 2012 presidential campaign was the public’s top story last week, closely followed by news about the economy.

About a quarter (23%) say they followed news about the candidates for president most closely. Another 18% say the economy was their top story. Nearly as many (15%) say they followed news about the Super Bowl more closely than any other news, according to the latest weekly News Interest Index survey, conducted Feb. 2-5 among 1,006 adults by the Pew Research Center for the People & the Press.

The presidential campaign was by far the most covered story, accounting for 36% of the newshole, according to a separate analysis by the Pew Research Center’s Project for Excellence in Journalism (PEJ). News about the economy accounted for 10% of coverage, while the Super Bowl accounted for 2%.

No Change in Perceptions of Economic News 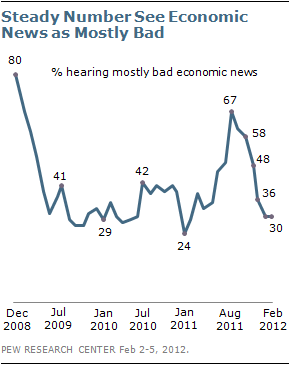 Perceptions of the tone of economic news are essentially unchanged since early January, despite the release of a better-than-expected federal jobs report last Friday. About six-in-ten (59%) say they are hearing a mix of good and bad news about the economy, while 30% say recent news about the economy has been mostly bad. In January, 60% said economic news was mixed while 30% said it was mostly bad. As has been since late 2008, very few Americans say they hearing mostly good economic news (8% currently).

Perceptions of the tone of economic news had been improving steadily since they tumbled last summer amid concerns the economy could be slipping back into recession. In August, 67% said the news about the economy was mostly bad, more than double the figure saying that today.

There continue to be sizable partisan differences in perceptions of economic news, although majorities of Democrats (65%), independents (58%) and Republicans (56%) say the news has been mixed. Twice as many Republicans as Democrats (40% vs. 20%) say they are hearing mostly bad news about the economy. Independents fall in between (31%). On the other hand, 13% of Democrats and 9% of independents say they are hearing mostly good news about the economy, compared with just 3% of Republicans. 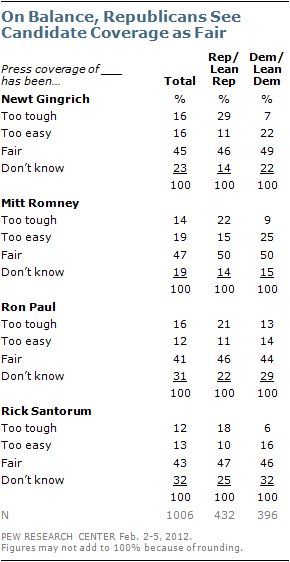 On balance, the public thinks that press coverage of the Republican presidential candidates has been fair. Pluralities say that coverage of Mitt Romney (47%), Newt Gingrich (45%), Rick Santorum (43%) and Ron Paul (41%) has been fair, rather than too tough or too easy.

There are partisan differences in views of candidate coverage. More Republicans and independents who lean Republican than Democrats and Democratic leaners say the press has been too tough on the GOP candidates. Those aligned with Democrats are more likely to say that coverage of Romney and Gingrich, in particular, has been too easy.

The gender differences in interest in most of the week’s stories are fairly modest, but women are far more likely than men to say they followed the controversy over whether the Susan G. Komen for the Cure breast cancer charity would cut funding to Planned Parenthood. 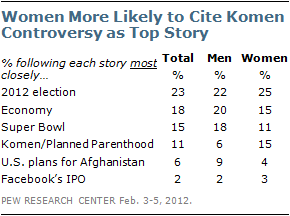 Overall, 15% of women cited the controversy over Komen’s funding for Planned Parenthood as their top story, compared with 6% of men. And more women than men followed this story very closely (24% vs. 16%).

The election was the top story for women (25%). The economy and Komen tied as the second ranked story that women followed most closely (15% each). For men, the election (22% most closely), the economy (20%) and the Super Bowl (18%) were all much bigger stories than the controversy over Komen’s funding for Planned Parenthood.

Nearly four-in-ten Americans (38%) say they followed news about the economy very closely last week, not much different from the 35% that said this one week earlier. The economy was the top story for 18% and accounted for 10% of coverage.

Nearly a quarter (23%) say they followed news about the Super Bowl very closely; this was the top story for 15%. Though two teams from the Northeast faced off in the NFL championship, interest in the other regions of the country was not significantly different. The game accounted for 2% of coverage as measured by PEJ. 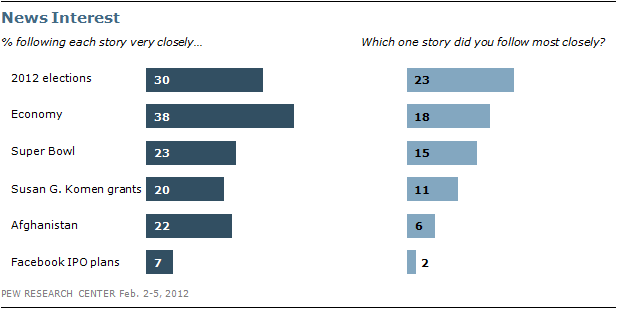 Two-in-ten (20%) say they very closely followed the controversy over the Susan G. Komen group’s funding for Planned Parenthood; 11% say this was the news story they followed most closely. Democrats are more likely to say this was their top story (19%) than are independents (9%) or Republicans (5%). News about the controversy made up 4% of coverage.

The announcement by Facebook that the company had filed with regulators to start selling stock in an initial public offering attracted modest attention; 7% say they followed this news very closely, while 2% say this was the news they followed most closely. News about the stock offering by the web giant accounted for 4% of coverage.

These findings are based on the most recent installment of the weekly News Interest Index, an ongoing project of the Pew Research Center for the People & the Press. The index, building on the Center’s longstanding research into public attentiveness to major news stories, examines news interest as it relates to the news media’s coverage. The weekly survey is conducted in conjunction with The Project for Excellence in Journalism’s News Coverage Index, which monitors the news reported by major newspaper, television, radio and online news outlets on an ongoing basis. In the most recent week, data relating to news coverage were collected Jan. 30-Feb 5, and survey data measuring public interest in the top news stories of the week were collected Feb. 2-5 from a nationally representative sample of 1,006 adults.