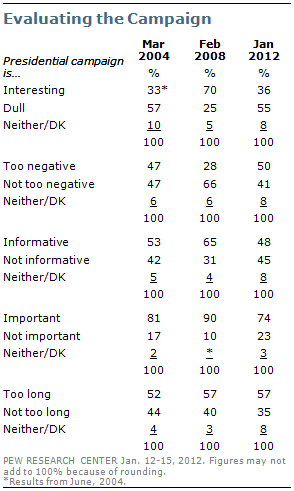 As the Republican candidates battle for the chance to challenge Barack Obama in November, many Americans are highly critical of the presidential campaign.

Half (50%) say the campaign has been too negative. By comparison, four years ago, amidst primary fights in both parties, just 28% said the campaign at that point was too negative. Current ratings are more comparable to impressions of the 2004 Democratic primary campaign.

Most Americans (55%) describe the 2012 campaign so far as dull, with just 36% saying they find it interesting. This, too, is a reversal from four years ago, when seven-in-ten rated the campaign as interesting and just a quarter said it was dull. The share rating the 2012 campaign as either informative or important is also significantly lower than at a comparable point in 2008.

One constant is the impression that the campaign is too long. According to the latest weekly News Interest Index survey, conducted Jan. 12-15 among 1,008 adults by the Pew Research Center for the People & the Press, 57% say the campaign has been too long, while 35% say it has not been too long. This is virtually identical to public evaluations of previous presidential campaigns. 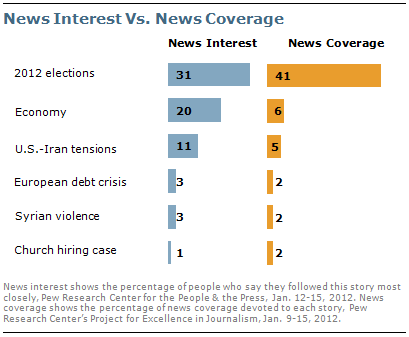 With the New Hampshire primary on Jan. 10, the presidential campaign was the public’s and the media’s top story last week. Three-in-ten (31%) say this was the news they followed most closely; 20% say their top story was the economy. Campaign news dominated coverage, accounting for 41% of the newshole, according to a separate analysis by the Pew Research Center’s Project for Excellence in Journalism (PEJ). 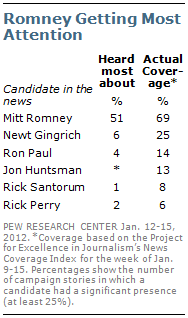 have the most about in the news recently, far more than any other Republican candidate. Romney also was by far the most heard about candidate one week earlier, following his narrow win over Rick Santorum in the Iowa caucuses. These public impressions are consistent with the amount of news coverage devoted to each candidate. According to PEJ, Romney was a significant player in 69% of election stories analyzed last week. No one else comes close. Romney also has been receiving more negative attention than earlier in the campaign. (See: The Bain Story Hurts Romney and His Critics. )

Too Much Campaign Coverage? 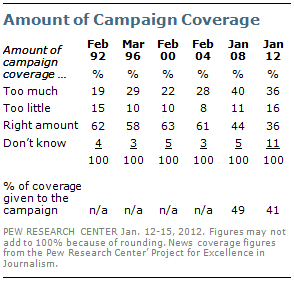 The current numbers are not much different from January 2008, also shortly after the New Hampshire primaries. At that time, 40% said news organizations were giving the campaign too much coverage, 44% said they were giving it the right amount and 11% said too little.

The share of people who feel the early campaigns are overcovered has been significantly higher in 2008 and 2012 than in previous primary elections. At comparable points in previous campaigns going back to 1992, majorities said news organizations were giving the campaigns the right amount of coverage.

Most Aware of Bain Capital Controversy 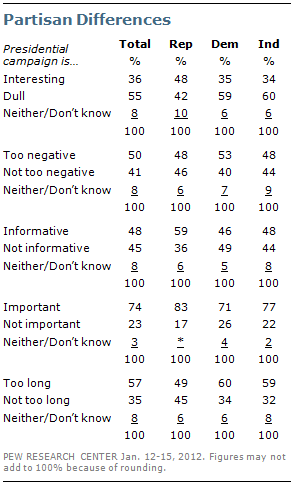 With just the GOP engaged in a primary fight in 2012, Republicans are somewhat more positive about the campaign so far than Democrats or independents.

Republicans are almost evenly divided on whether the campaign is too negative or not (48% vs. 46%). Among Democrats, the balance tilts toward too negative (53% vs. 40%). Independent views on this are little different from Republicans.

Following Romney’s win in New Hampshire, news about the presidential election topped both the public’s news interest and media coverage.

About one-in-ten (11%) say their top story was the mounting tensions between the U.S. and Iran; 24% say they followed this news very closely. News about Iran made up 5% of the newshole. 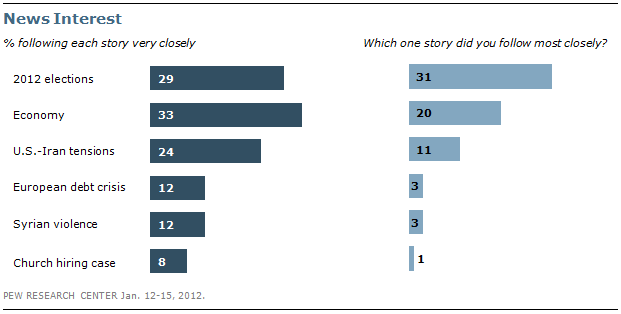 The European debt crisis attracted little attention or coverage last week; 3% say this was their top story, while 12% say they followed this news very closely. The ongoing crisis accounted for 2% of coverage.

The situation in Syria attracted similarly low interest; 3% say this was the news they followed most closely, while 12% say they followed this news very closely. News about political violence in Syria made up 2% of coverage.

These findings are based on the most recent installment of the weekly News Interest Index, an ongoing project of the Pew Research Center for the People & the Press. The index, building on the Center’s longstanding research into public attentiveness to major news stories, examines news interest as it relates to the news media’s coverage. The weekly survey is conducted in conjunction with The Project for Excellence in Journalism’s News Coverage Index, which monitors the news reported by major newspaper, television, radio and online news outlets on an ongoing basis. In the most recent week, data relating to news coverage were collected Jan. 9-15, and survey data measuring public interest in the top news stories of the week were collected Jan.12-15 from a nationally representative sample of 1,008 adults.