Many voters do not know basic facts about the Republican candidates running for president or the early primary calendar. While a sizable majority (69%) knows that Newt Gingrich served as speaker of the House, only about half (53%) identify Massachusetts as the state where Mitt Romney served as governor. 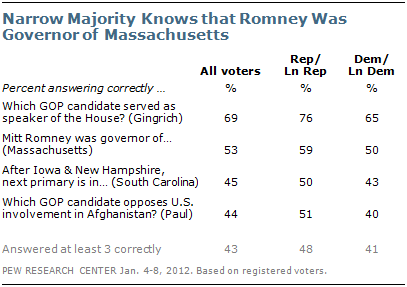 Fewer than half of registered voters (45%) identify South Carolina as the state with the next primary after Iowa and New Hampshire (the survey was conducted Jan. 4-8, before New Hampshire’s Jan. 10 primary). And while Ron Paul fared well in the early GOP contests, just 44% of voters identify Paul as the Republican candidate who opposes U.S. military involvement in Afghanistan.

The latest national survey by the Pew Research Center for the People & the Press conducted Jan. 4-8, 2012 among 1,507 adults and 1,165 registered voters, finds even among Republican voters, many are unable to identify the state where Romney served as governor and are unfamiliar with Paul’s stance on Afghanistan.

Among Republican and Republican-leaning voters, 76% know that Gingrich was House speaker, 59% know that Romney was governor of Massachusetts, and about half know that Paul opposes the U.S. military mission in Afghanistan (51%) and that South Carolina is the state where the next primary would be held, following the New Hampshire primary and Iowa caucuses (50%). 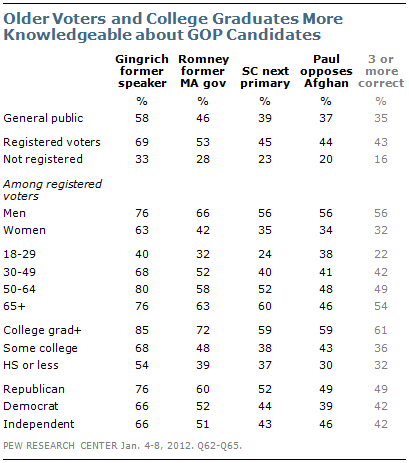 As in past knowledge surveys, there are substantial differences in knowledge by age, education and gender. In addition, registered voters are much better-informed about the GOP candidates and primary process than are non-voters.

Voters under age 30 are far less likely than older voters to know about Gingrich’s and Romney’s background, and that South Carolina is the state for the next GOP primary. But about as many younger voters as older voters know that Ron Paul opposes U.S. involvement in Afghanistan.

Men also are more likely than women to know facts about the GOP candidates and primaries. Across all four questions, 56% of men correctly answered at least three, compared with just 32% of women. 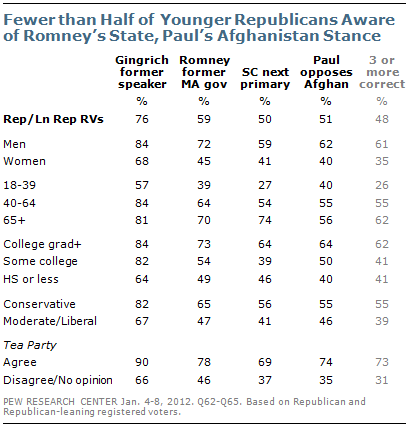 The age, gender and education gaps present among voters overall also are evident among GOP voters. Just 26% of Republican and Republican-leaning voters under 40 correctly answered at least three of the four questions, compared with 62% of those 65 and older.

Similarly, more conservative Republicans than moderate and liberal Republicans know that Gingrich was the former speaker, Romney was governor of Massachusetts and that South Carolina holds the next primary.