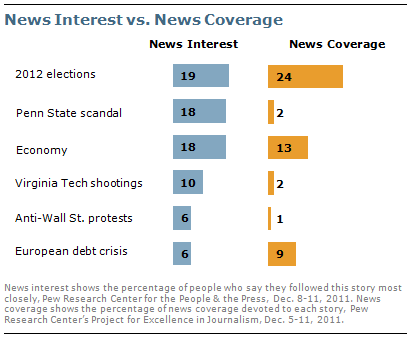 The latest allegations in the child sex abuse scandal at Penn State University rivaled news about the 2012 elections and the economy for the public’s attention last week.

About two-in-ten (19%) say news about the candidates for the 2012 presidential elections was their top story, while 18% each say they followed news about the economy or the Penn State scandal most closely, according to the latest weekly News Interest Index survey, conducted Dec. 8-11 by the Pew Research Center for the People & the Press among 1,008 adults.

With Newt Gingrich’s rise to the top of the Republican field and the Iowa caucuses just weeks away, the 2012 presidential campaign received more coverage than any other story. The campaign accounted for 24% of the newshole last week, according to a separate analysis by the Pew Research Center’s Project for Excellence in Journalism (PEJ).

News about the economy, including the debate in Washington over whether to extend a payroll tax break as a way to spur economic growth, accounted for 13% of coverage. That rises to 14% if news about the Occupy Wall Street protests is included. Efforts to deal with the credit crisis in Europe accounted for a separate 9% of coverage.

Compared to the week’s other top stories, the new sex abuse charges against former Penn State assistant football coach Jerry Sandusky received modest coverage, accounting for 2% of the newshole, according to PEJ.

About four-in-ten (41%) say they followed news about the nation’s economy very closely, just about matching the 40% that said they were following economic news this closely one week earlier. 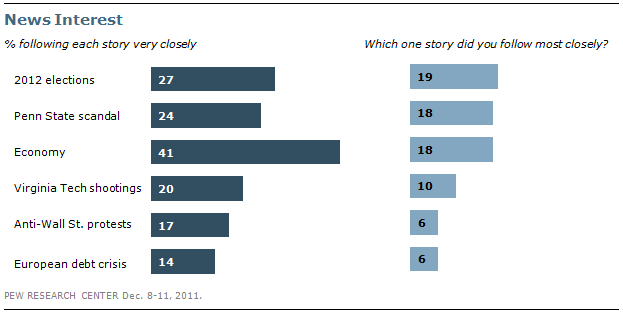 Fewer than two-in-ten (17%) say they very closely followed news about the anti-Wall Street protests in several cities around the country; 6% say this was the news they followed most closely. News about the protests accounted for 1% coverage.

These findings are based on the most recent installment of the weekly News Interest Index, an ongoing project of the Pew Research Center for the People & the Press. The index, building on the Center’s longstanding research into public attentiveness to major news stories, examines news interest as it relates to the news media’s coverage. The weekly survey is conducted in conjunction with The Project for Excellence in Journalism’s News Coverage Index, which monitors the news reported by major newspaper, television, radio and online news outlets on an ongoing basis. In the most recent week, data relating to news coverage were collected Dec. 5-11, and survey data measuring public interest in the top news stories of the week were collected Dec. 8-11 from a nationally representative sample of 1,008 adults.