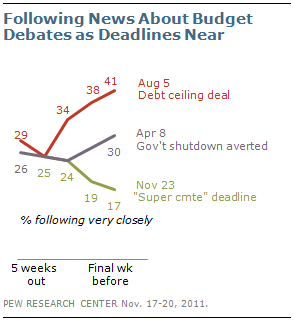 Few Americans (17%) paid very close attention to news about the congressional “super committee” last week as the panel approached its deadline to agree on a plan to cut federal spending and reduce the national deficit.

The survey was completed before panel leaders announced on Monday that they would not reach a deal by their deadline. Still, panel members and others already had indicated that a deal was unlikely.

The panel’s deliberations received far less news coverage than the summer standoff over the nation’s debt ceiling received. During that fight, interest rose as the deadline approached. Not this time. Public attentiveness to news about the super committee during the days leading up to the panel’s Nov. 23 deadline was no higher than it had been a week earlier. 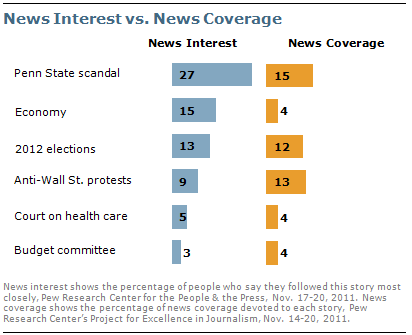 The deficit panel also drew relatively little news coverage, according to a separate analysis by the Pew Research Center’s Project for Excellence in Journalism. News about the super committee accounted for 4% of all coverage last week, much less than the Penn State scandal (15%), the 2012 elections (12%) or the Occupy Wall Street protests (13%).

The public paid much closer attention to the standoff in Congress over raising the nation’s debt ceiling in mid-summer. One week before the Aug. 5 deadline, 41% said they were very closely following the debate in Washington over how to address the national debt and deficit. A week later, following the agreement that included creation of the super committee, nearly half (46%) said they were tracking this news very closely.

The build-up to that deadline –with potentially real and immediate consequences of failure – also attracted significant coverage. The week before the final deadline, the debate over the debt and deficit accounted for 47% of coverage. The deal, how it was reached and its ramifications, accounted for 26% of the newshole the following week.

Interest also was higher in early April as another budget stalemate threatened to lead to a government shutdown. One week before the shutdown was averted, 30% said they were following the deficit deliberations very closely. The week the agreement was reached that grew to 47%. Coverage one week out was similar to coverage of the deliberations last week: 5% of the newshole. That jumped to 29% the week of the agreement, according to PEJ.

Nearly three-in-ten (28%) say they very closely followed news about the child sex abuse allegations involving a former assistant Penn State football coach; 27% say this was the news they followed most closely. The developments in the scandal accounted for 15% of the newshole, according to PEJ.

About a third (35%) say they followed reports about the condition of the U.S. economy very closely, not much different from the level of interest in recent weeks; 15% say this was their top story. Not including reports about the super committee or Occupy Wall Street, news about the economy accounted for 4% of coverage. 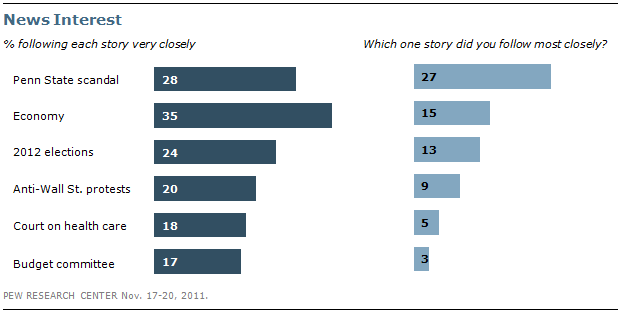 About a quarter (24%) say they very closely followed news about the candidates for the 2012 presidential elections. Not surprisingly, more Republicans say they followed this news very closely than Democrats (34% vs. 22%). Two-in-ten independents (20%) say this as well. Just more than one-in-ten (13%) say election news was the story they followed most closely. News about the presidential elections made up 12% of coverage.

These findings are based on the most recent installment of the weekly News Interest Index, an ongoing project of the Pew Research Center for the People & the Press. The index, building on the Center’s longstanding research into public attentiveness to major news stories, examines news interest as it relates to the news media’s coverage. The weekly survey is conducted in conjunction with The Project for Excellence in Journalism’s News Coverage Index, which monitors the news reported by major newspaper, television, radio and online news outlets on an ongoing basis. In the most recent week, data relating to news coverage were collected Nov. 14-20, and survey data measuring public interest in the top news stories of the week were collected Nov. 17-20 from a nationally representative sample of 1,003 adults.