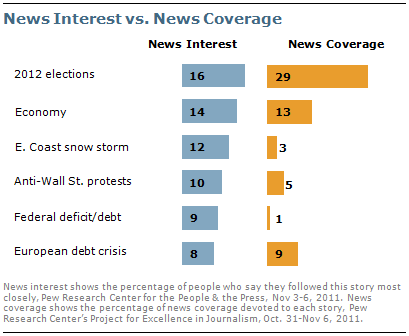 Public interest in the presidential campaign showed no increase this week, despite the news media’s increasing coverage of sexual harassment allegations against Herman Cain.

About one-in-five Americans (22%) say they followed news about the 2012 candidates very closely, little changed from a week earlier (21%), according to the latest weekly News Interest Index survey, conducted Nov. 3-6 among 1,005 adults by the Pew Research Center for the People & the Press.

Still, the Cain allegations registered widely with the public: 75% say they heard a lot (51%) or a little (24%) about the accusations that Cain sexually harassed several women in the late 1990s when he served as president of the National Restaurant Association.

Meanwhile, coverage of the campaign accounted for 29% of all news coverage, up from only 18% a week earlier, according to a content analysis by the Pew Research Center’s Project for Excellence in Journalism (PEJ). About two-thirds of campaign coverage dealt with the controversy surrounding Cain and its potential impact on the race (20% of all coverage).

The survey was completed before a new allegation against Cain was reported on Monday and Cain held a news conference Tuesday. (For more on the Cain controversy, see “39% Think Cain Allegations True; 24% False” Nov. 7, 2011)

The public, on balance, thinks that press coverage of Herman Cain has been fair, but far more say that the news media has been too tough on Cain than say that about coverage of two other leading GOP contenders, Mitt Romney and Rick Perry. 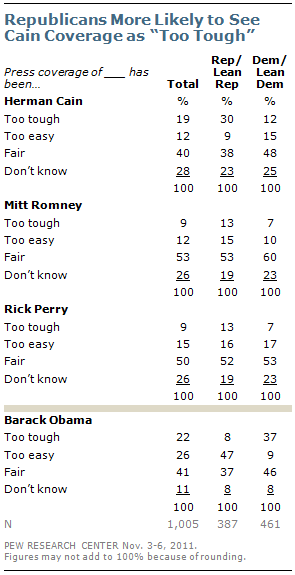 Among Republicans and GOP leaners who had heard at least a little about the Cain allegations, about as many say the press has been too tough on the candidate (37%) as say coverage has been fair (39%). Just 10% say it has been too easy.

Nearly half (48%) of Democrats and Democratic leaners say coverage of Cain has been fair; about as many say the coverage has been too easy (15%) as too tough (12%). The numbers are only slightly different among those who had heard at least a little about the allegations.

Majorities of Democrats say the coverage of Romney (60%) and Perry (53%) has been fair.

The public has different impressions of news coverage of Barack Obama than of the GOP candidates. About as many say the press has been too easy on Obama as too tough (26% vs. 22%), while 41% say coverage of Obama has been fair. These numbers are little changed from July.

As might be expected, views of press coverage of Obama divide along partisan lines: 37% of Democrats and Democratic-leaning independents say coverage has been too tough compared with only 8% of Republicans and GOP leaners. Nearly half of Republicans and Republican leaners (47%) say coverage of Obama has been too easy, while just 9% of Democrats and Democratic leaners say the same.

Most Have Heard about Cain, Bank Fees

In addition to the Cain allegations, most Americans say they heard at least a little last week about large banks abandoning plans to charge monthly fees for using debit cards to shop (46% a lot, 33% a little). Far fewer had heard about the arrest of four older men in Georgia on 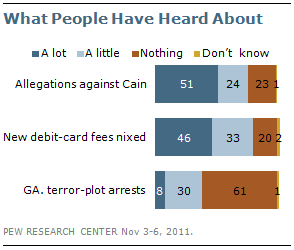 charges that they were planning a terror attack involving the poison ricin. Just 8% had heard a lot about this story, 30% had heard a little. About six-in-ten (61%) had heard nothing at all about this.

Despite the political nature of the Cain story, there is no partisan difference in familiarity with this story. Modest majorities of Republicans (52%), Democrats (57%) and independents (51%) had heard a lot about the accusations that Cain sexually harassed several women in the late 1990s.

Nearly four-in-ten (37%) say they followed news about the condition of the U.S. economy very closely last week, essentially unchanged in recent weeks; 14% say this was the news they followed most closely.

About two-in-ten (22%) say they very closely followed news about the candidates for president in 2012, also largely unchanged in recent weeks. While Republicans have shown greater interest in campaign news in recent weeks, that was not the case last week: 24% of Republicans, 24% of Democrats and 22% of independents say they followed news about the campaign very closely.

Two-in-ten (20%) followed news about the early snow storm that knocked out power for millions last week in the Northeast. Not surprisingly, interest was highest in that region: 46% followed this news very closely, more than double the number for any other region. The storm was the top story for 12% and accounted for 3% of the newshole, according to PEJ. 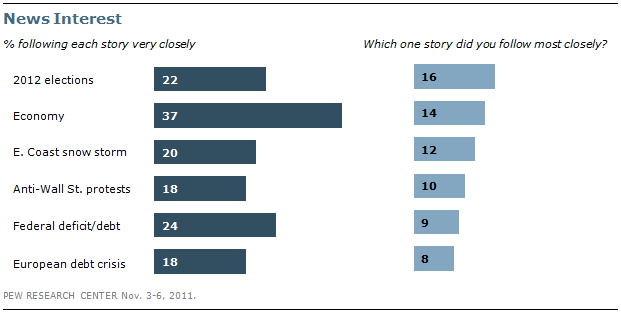 About a quarter of the public (24%) says they followed news about the deliberations in Washington over deficit and debt reduction very closely; 9% say this was their top story. Partisans are about equally likely to say they tracked this news very closely. With much of the deliberations at this point unfolding behind closed doors, the story accounted for just 1% of coverage measured by PEJ.

Nearly two-in-ten (18%) say they followed news about efforts in Europe to deal with the debt crisis in Greece and other countries; this was the top story for 8%. News about the European debt crisis accounted for 9% of coverage.

These findings are based on the most recent installment of the weekly News Interest Index, an ongoing project of the Pew Research Center for the People & the Press. The index, building on the Center’s longstanding research into public attentiveness to major news stories, examines news interest as it relates to the news media’s coverage. The weekly survey is conducted in conjunction with The Project for Excellence in Journalism’s News Coverage Index, which monitors the news reported by major newspaper, television, radio and online news outlets on an ongoing basis. In the most recent week, data relating to news coverage were collected Oct. 31-Nov. 6, and survey data measuring public interest in the top news stories of the week were collected Nov. 3-6 from a nationally representative sample of 1,005 adults.