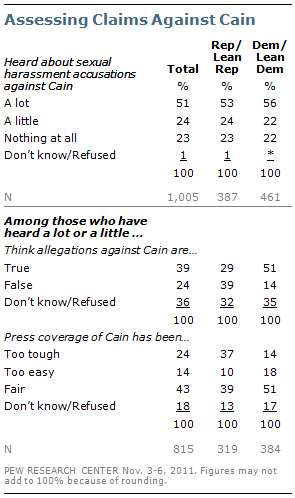 Americans who have heard about the sexual harassment allegations against Republican presidential candidate Herman Cain, on balance, think they are true rather than false. At the same time, a plurality thinks that recent coverage of Cain has been fair.

Three-quarters of the public say they have heard a lot (51%) or a little (24%) about accusations that Cain harassed several women during his tenure in the late 1990s as president of the National Restaurant Association.

Of those who had heard about the allegations, about four-in-ten (39%) say that, from what they have read and heard, they think the allegations are true. Roughly a quarter (24%) say they think the claims are false, according to the latest weekly survey by the Pew Research Center for the People & the Press, conducted Nov. 3-6 among 1,005 adults. Another 36% say they do not know (31%) or refuse to answer (5%). The survey was completed before a Chicago woman went public with a new accusation against Cain on Monday.

A plurality (43%) of those who have heard about the allegations say they think recent media coverage of Cain has been fair. Among those critical of the press coverage, more say it has been too tough (24%) than too easy (14%) on Cain.

Overall, there are no significant gender differences in views about the validity of the accusations against Cain. Roughly four-in-ten women (40%) and men (38%) who have heard at least a little about the allegations think they are true; about a quarter (25% of women, 23% of men) think they are false. 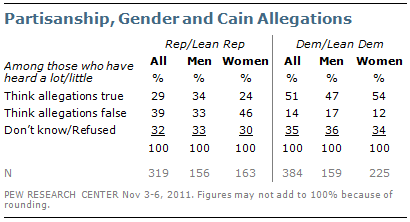