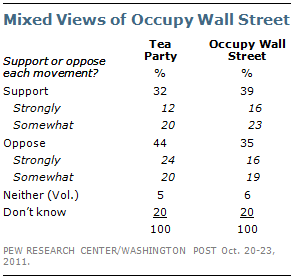 About four-in-ten Americans say they support the Occupy Wall Street movement (39%), while nearly as many (35%) say they oppose the movement launched last month in New York’s financial district.

By contrast, more say they oppose the Tea Party movement than support it (44% vs. 32%), according to the latest survey by the Pew Research Center for the People & the Press and The Washington Post, conducted Oct. 20-23 among 1,009 adults. One-in-ten (10%) say they support both, while 14% say they oppose both.

Partisanship plays a strong role in attitudes about the two movements. About six-in-ten Republicans (63%) say they support the Tea 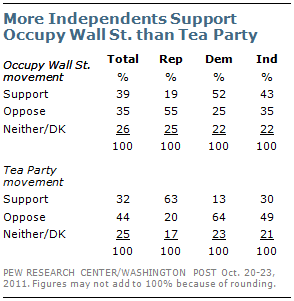 Party. That jumps to 77% among Republicans who describe themselves as conservative. Just 13% of Democrats support the Tea Party movement, while 64% are opposed. 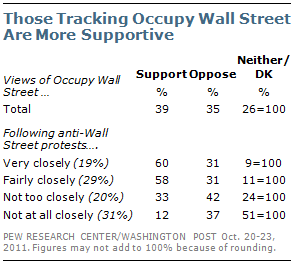