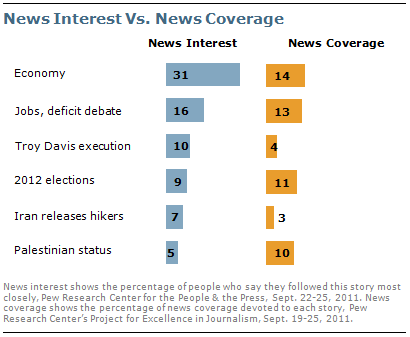 Amid continued uncertainty at home and abroad, economic news was once again the top story last week for both the public and the news media.

Three-in-ten (31%) say they followed news about the condition of the U.S. economy more closely than any other news last week, according to the latest weekly News Interest Index survey, conducted Sept. 22-25 among 1,000 adults by the Pew Research Center for the People & the Press. Another 16% cite the related debate in Washington over jobs and the deficit as their top story.

Adding various story lines together, economic news easily topped coverage as well. News about the economy in general made up 14% of the newshole while news about the debate in Washington over steps the government should take to address the situation accounted for another 13%, according to a separate analysis by the Pew Research Center’s Project for Excellence in Journalism (PEJ).

News about the execution of Troy Davis in Georgia also drew significant interest, with 10% saying this was the story they followed most closely. But African Americans tracked the story much more closely than whites or the public as a whole. About two-in-ten African Americans (22%) say this was their top story of the week. That ranked nearly as high as news about the economy (27% most closely). Among whites, just 9% say the execution was their top story. Three times as many (31%) cite the economy as the story they followed most closely.

With global stock markets fluctuating dramatically and no sign of improvement on the jobs front at home, more than four-in-ten (44%) say they followed news about the condition of the U.S. economy very closely last week. That’s little changed from recent weeks. Interest is comparable among different partisan groups, income levels and regions of the country.

About a third of the public (35%) says they very closely followed news about the debate in Washington over how best to create jobs and reduce the federal deficit. There is little difference among partisans in the numbers tracking this highly partisan fight (40% of Republicans, 36% of Democrats and 33% of independents say they followed this news very closely). 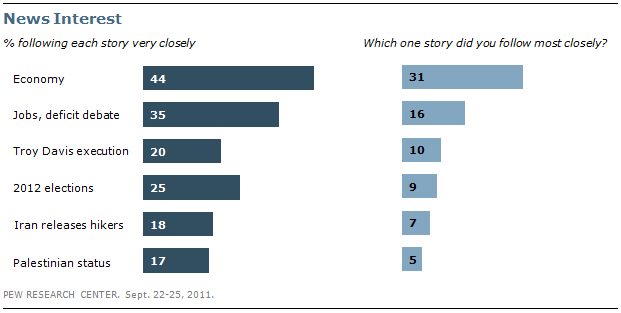 With much of the coverage focused on Texas Gov. Rick Perry and his performance in the most recent debate, news about the 2012 elections accounted for 11% of the newshole measured by PEJ.

Nearly two-in-ten (18%) say they very closely followed news about Iran’s release of two imprisoned American hikers; 7% say this was the story they followed most closely. The end of the long-running saga accounted for 3% of coverage.

The public showed limited interest in the debate at the United Nations over the status of the Palestinian territories; 17% say they followed this news very closely, while 5% say this was their top story of the week. Amid the international maneuvering that unfolded over the course of the week at the UN, the story accounted for 10% of coverage, nearly as much as the U.S. presidential campaign.

Many Heard About Satellite Hurtling to Earth 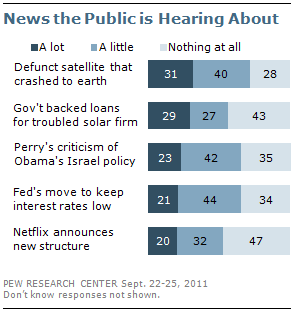 These findings are based on the most recent installment of the weekly News Interest Index, an ongoing project of the Pew Research Center for the People & the Press. The index, building on the Center’s longstanding research into public attentiveness to major news stories, examines news interest as it relates to the news media’s coverage. The weekly survey is conducted in conjunction with The Project for Excellence in Journalism’s News Coverage Index, which monitors the news reported by major newspaper, television, radio and online news outlets on an ongoing basis. In the most recent week, data relating to news coverage were collected Sept. 19-25, and survey data measuring public interest in the top news stories of the week were collected Sept. 22-25 from a nationally representative sample of 1,000 adults.