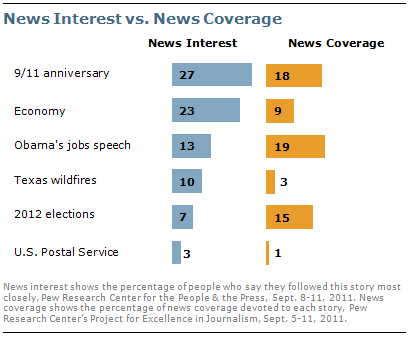 About a quarter (27%) say they followed coverage of the solemn 9/11 anniversary more closely than any other news. Nearly as many (23%) say they followed news about the economy most closely. Another 13% cite President Obama’s speech to Congress to unveil his jobs plan as their top story, according to the latest weekly News Interest Index survey, conducted Sept. 8-11 by the Pew Research Center for the People & the Press among 1,010 adults.

These two topics – the 9/11 anniversary and the economy’s troubles – also topped media coverage. News about the anniversary and developments related to terror on the home front together accounted for 18% of coverage, according to the Pew Research Center’s Project for Excellence in Journalism (PEJ). News about the economy made up a total of 28% of the newshole. About two thirds of that (19% of all coverage) focused on Obama’s Sept. 8 jobs speech, while 9% focused on economic news more generally.

Most Americans (60%) say that news organizations gave the right amount of coverage to the Sept. 11 anniversary. Fewer (44%) say this about coverage of the early stages of the 2012 presidential campaign.

With Rick Perry quickly attaining front-runner status since jumping into the race last month, 31% say the Texas governor is the possible Republican candidate they have heard about most in the news recently. No one else comes close: 12% say that candidate is former Massachusetts Gov. Mitt Romney while 7% say it is Rep. Michele Bachmann of Minnesota. In mid-August, Americans were about equally likely to say they had heard the most about Perry or Bachmann. 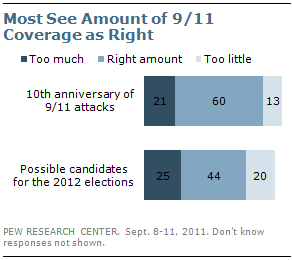 A plurality (44%) continues to say that news organizations are giving the right amount of coverage to possible candidates for the 2012 election; 25% say the presidential campaign has gotten too much coverage while 20% say it has gotten too little coverage.

Differences among partisans are relatively narrow, though Republican (56%) are more likely than Democrats (45%) or independents (39%) to say news organizations are giving the candidates the right amount of coverage.

Perry Getting Most Attention 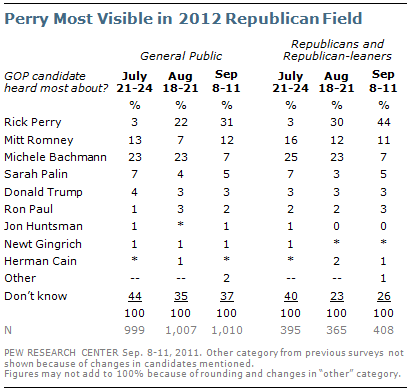 Three-in-ten (31%) name Perry when asked
which GOP candidate they have heard the most about in the news recently. That is much higher than the percentages naming Romney (12%) or Bachmann (7%).
The survey was completed before Monday’s GOP debate in Tampa.

In mid-August – with Bachmann coming off a win in the Iowa straw poll and Perry joining the race – about as many said they had heard the most about Bachmann (23%) as Perry (22%). Since then, Bachmann’s visibility has dropped sharply.

Two-in-ten (20%) say they followed news about the destructive Texas wildfires very closely; 10% say this was the news they followed most closely. Not surprisingly, more people in the South followed this news very closely (28%) than those in any other region. 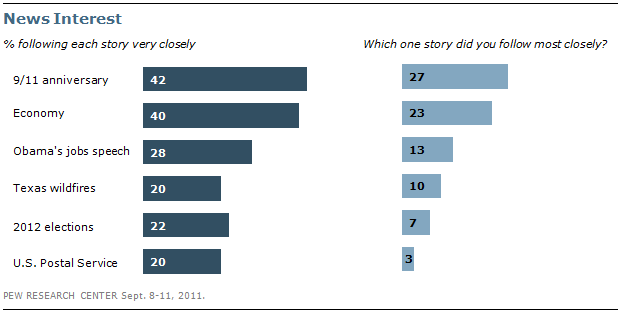 These findings are based on the most recent installment of the weekly News Interest Index, an ongoing project of the Pew Research Center for the People & the Press. The index, building on the Center’s longstanding research into public attentiveness to major news stories, examines news interest as it relates to the news media’s coverage. The weekly survey is conducted in conjunction with The Project for Excellence in Journalism’s News Coverage Index, which monitors the news reported by major newspaper, television, radio and online news outlets on an ongoing basis. In the most recent week, data relating to news coverage were collected Sept. 5-11, and survey data measuring public interest in the top news stories of the week were collected Sept. 8-11 from a nationally representative sample of 1,010 adults.