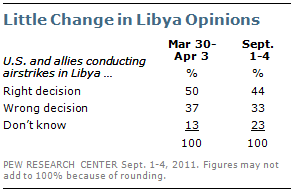 Despite the apparent success of NATO-supported rebel troops, public views about the decision to conduct air strikes in Libya remain mixed and have changed little since the U.S. and allies launched military operations there in late March.

Over the same period, public attentiveness to the events in Libya has declined substantially – even as rebels have taken control of Tripoli and sent Moammar Gadhafi into hiding.

Currently, 44% say the U.S. and its allies made the right decision to conduct air strikes in Libya, while 33% see this as the wrong decision; 23% offer no opinion. In early April, shortly after the operation began, 50% said the air attacks were the right decision, 37% disagreed and fewer (13%) had no opinion. 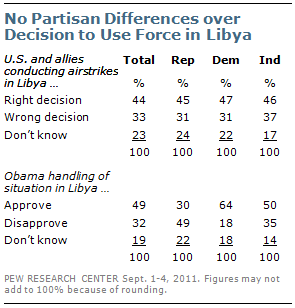 President Obama receives positive marks for his handling of the situation in Libya – 49% approve while 32% disapprove. In April, the public was more evenly divided in opinions about Obama’s performance on Libya: 41% approved while 46% disapproved.

The latest national survey by the Pew Research Center for the People & the Press, conducted Sept. 1-4 among 1,001 adults, finds virtually no partisan differences in opinions about the decision to conduct airstrikes in Libya: 45% of Republicans, 47% of Democrats and 46% of independents say this was the right decision. 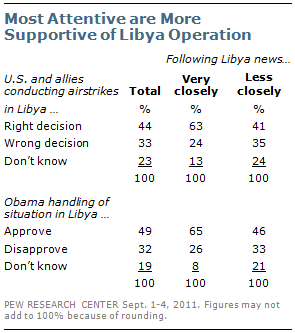 Among the relatively small percentage (17%) that says they followed news about Libya very closely last week, 63% say the decision by the U.S. and its allies to launch airstrikes was the right decision, while about a quarter (24%) say it was the wrong decision. The large majority following less closely is more divided: 41% say launching the operation was the right decision, while 35% say it was the wrong decision. About a quarter (24%) say they do not know. 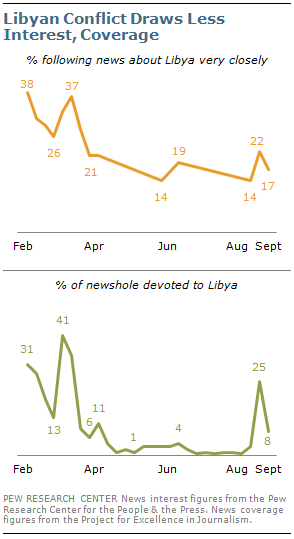 Public interest in events in Libya was far greater when NATO first launched airstrikes March – and when civil unrest first erupted in February – than it is today. In late February, 38% said they were following the increasing violence in Libya very closely. In early April, shortly after the airstrikes began and Obama delivered a speech outlining his reasons for intervening in the conflict, 37% tracked news about the NATO airstrikes against Libya very closely.

Since the opening weeks of the military operation, interest in Libya has faded. Last week, as fighting continued and anti-government forces hunted for Gadhafi, just 17% followed news about the situation in Libya very closely, according to Pew Research Center’s weekly News Interest Index.

News coverage of Libya also was modest through much of the summer as the NATO campaign unfolded. However, coverage ramped up in late August when anti-government rebels took control of much of Tripoli. From Aug. 22-28, news about the chaotic events in Libya accounted for 25% of all coverage, the highest level since late March, according to data compiled by the Pew Research Center’s Project for Excellence in Journalism. (See From Tripoli to the East Coast, A Week of Big Events). That dropped significantly last week as the aftermath of Hurricane Irene and news about the economy topped coverage.