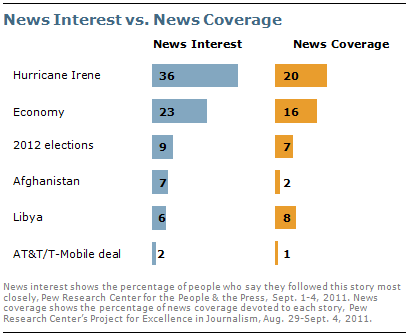 The aftermath of Hurricane Irene was the top story for the public and the media last week, as flooding worsened in many East Coast states well after the storm winds had died down.

More than a third of the public (36%) say that the impact of the hurricane was the news they followed most closely. Another 23% say news about the struggling economy was their top story, according to the latest News Interest Index survey, conducted Sept. 1-4 among 1,001 adults by the Pew Research Center for the People & the Press.

News about Irene accounted for 20% of the coverage analyzed by the Pew Research Center’s Project for Excellence in Journalism (PEJ), making Irene the most covered story of the week. News about the economy was not far behind, making up 16% of coverage. 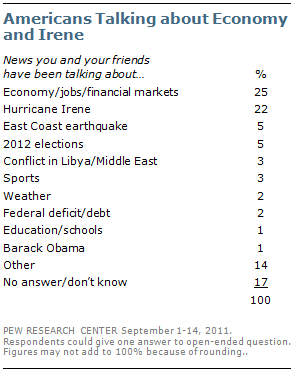 Not surprisingly, those same two stories were the top topics of conversations. When people are asked which news topics they have been talking about with friends, one-in-four (25%) mention an economic issue – such as the job situation or the stock market, while 22% say they have been talking about Irene. No other story comes close: 5% each say they talked about the East Coast earthquake or the 2012 elections, 3% each say the conflict in Libya or sports stories and 2% name weather or the federal deficit or national debt. 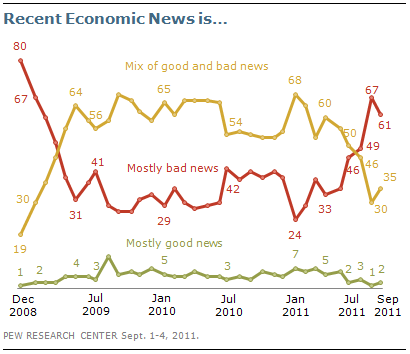 As President Obama prepares to speak to the nation Thursday night about steps to boost job creation, six-in-ten (61%) say they are hearing mostly bad news about the economy. That’s down from 67% at the start of August, but still near the high levels recorded in early 2009 near the height of the economic crisis. 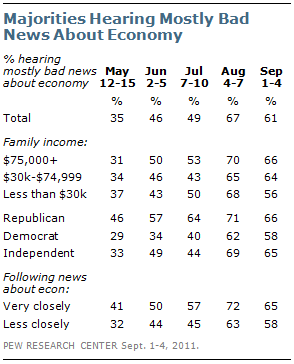 Perceptions of the tone of economic news worsened dramatically through much of 2011 as evidence mounted that the recovery had stalled. In May, about a third (35%) said they were hearing mostly bad news about the economy.

That grew to 49% in July and then hit a high for the year so far in August. The numbers moved little between August and September, though in a slightly more positive direction. The number hearing a mix of good and bad news rose from 30% in August to 35%. Still, that is about half the percentage that said this in January (68%). Just 2% say they are hearing mostly good news about the economy.

More than four-in-ten (44%) say they followed news about the economy very closely last week, maintaining the high level of interest in recent weeks as economic troubles have deepened both in the U.S. and in Europe. News about the economy accounted for 16% of coverage measured by PEJ. That includes the partisan skirmish in Washington over the scheduling of Obama’s speech. 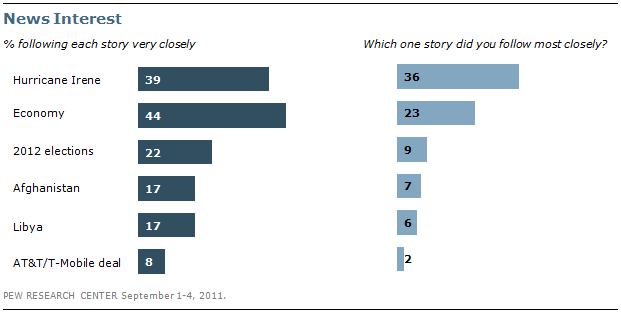 The public expressed similar levels of interest in developments in Afghanistan and Libya. Fewer than two-in-ten (17%) say they followed news about either war zone very closely; 7% say news about Afghanistan was their top story, while 6% say this about Libya.

Interest in news about Libya has remained modest in recent weeks, even with the apparent ouster of Moammar Gadhafi from power. News about Libya made up 8% of coverage, down significantly from the week before when rebel forces took Tripoli and sent Gadhafi on the run. One week earlier, news about Libya topped coverage, making up 25% of the newshole.

As the long-running war in Afghanistan continues, the public generally maintains a modest level of interest that spikes with major developments. For example, in mid-August about four-in-ten (39%) very closely followed news about the crash of a military helicopter that killed 30 Americans. That week, the Afghanistan crash was the public’s top story (27% most closely).

Few closely followed news about the U.S. Justice Department moving to block the merger of AT&T and T-Mobile: 8% followed this news very closely, while 2% say this was their top story. The news accounted for 1% of coverage.

These findings are based on the most recent installment of the weekly News Interest Index, an ongoing project of the Pew Research Center for the People & the Press. The index, building on the Center’s longstanding research into public attentiveness to major news stories, examines news interest as it relates to the news media’s coverage. The weekly survey is conducted in conjunction with The Project for Excellence in Journalism’s News Coverage Index, which monitors the news reported by major newspaper, television, radio and online news outlets on an ongoing basis. In the most recent week, data relating to news coverage were collected Aug. 29-Sept. 4, and survey data measuring public interest in the top news stories of the week were collected Sept. 1-4 from a nationally representative sample of 1,001 adults.