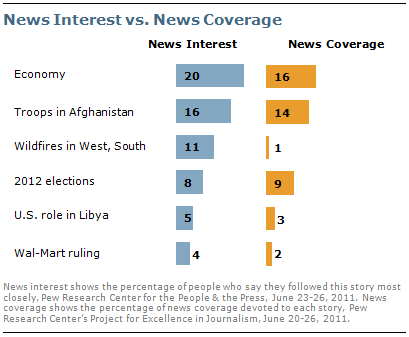 Americans focused most closely last week on news about the nation’s struggling economy and President Obama’s plans to draw down U.S. troops in Afghanistan.

Two-in-ten (20%) say the economy was their top story, while 16% say they followed the discussions in Washington about troop levels in Afghanistan more closely than any other top story, according to the latest weekly News Interest Index survey conducted June 23-26 among 1,005 adults by the Pew Research Center for the People & the Press.

Those two stories also topped news coverage last week, with the economy accounting for 16% of the newshole and Obama’s troop announcement accounting for 14%, according to a separate analysis by the Pew Research Center’s Project for Excellence in Journalism (PEJ). PEJ noted that the long-running war has received only modest coverage in recent years, though media attention generally increases when war developments – such as a shift in strategy or military leadership – take place in Washington.

Interest in Obama’s new troop drawdown plan is consistent with interest in other recent developments in Afghanistan policy. Still, it is considerably lower than interest in the president’s announcement on Dec. 1, 2009, that he would boost troop levels in Afghanistan. 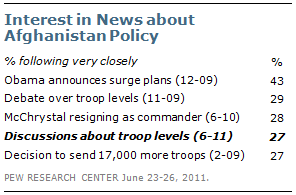 Nearly four-in-ten Americans (37%) say they followed news about the economy very closely last week. That’s little changed from recent weeks amid continuing signs that the recovery has slowed. Two-in-ten (20%) say this is the story they followed most closely.

While 27% say they followed discussions about Afghanistan troop levels very closely, interest in several other top stories was not far behind. About two-in-ten (21%) say they very closely followed news about continued wildfires in the West and South; this was the top story for 11%. News about the fires accounted for just 1% of national coverage measured by PEJ.

About two-in-ten (19%) say they followed news about the 2012 elections very closely, while 8% say this was their top story. Though most of the news has been about developments in the Republican field of presidential candidates, there is little difference among partisans in interest in this story. Election coverage accounted for 9% of the newshole.

A comparable 19% say they followed the debate over U.S. involvement in the conflict in Libya very closely; 5% say this was their top st0ry. News about U.S. policy in Libya accounted for 3% of coverage.

Just 13% say they followed news about the U.S. Supreme Court dismissing a sex-discrimination case against Wal-Mart very closely; 4% say this was the story they followed most closely. Men and women were just as likely to follow this news very closely. 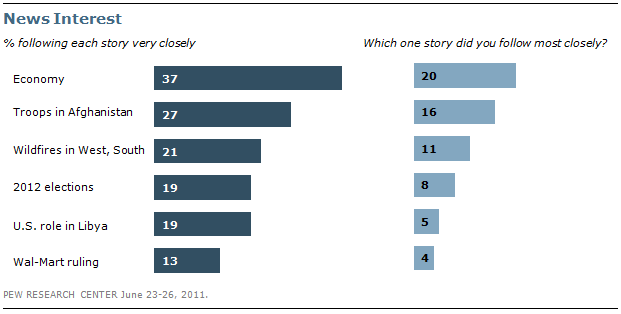 These findings are based on the most recent installment of the weekly News Interest Index, an ongoing project of the Pew Research Center for the People & the Press. The index, building on the Center’s longstanding research into public attentiveness to major news stories, examines news interest as it relates to the news media’s coverage. The weekly survey is conducted in conjunction with The Project for Excellence in Journalism’s News Coverage Index, which monitors the news reported by major newspaper, television, radio and online news outlets on an ongoing basis. In the most recent week, data relating to news coverage were collected June 20-26, and survey data measuring public interest in the top news stories of the week were collected June 23-26 from a nationally representative sample of 1,005 adults.