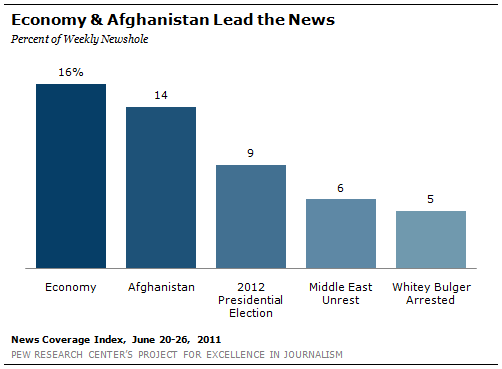 For Afghanistan to feature prominently in the news, the years have shown it usually depends on what is happening in Washington.

Last week was one such week. The war in that country accounted for 14% of the newshole in the U.S. mainstream media between June 20 and June 26, according to the Pew Research Center’s Project for Excellence in Journalism. It was the fourth biggest week of coverage for Afghanistan since PEJ began its weekly News Coverage Index monitoring the news agenda in January 2007, and easily the biggest week of coverage so far of 2011.

The last time the conflict in Afghanistan ranked among the top stories in any week was March 28-April 3, when it was No. 5 at 3% of the newshole (a Rolling Stone expose of an Army platoon drove much of the coverage that week). Since January, the war has accounted for only 2% of the newshole overall.

Last week’s coverage overwhelmingly focused on President Barack Obama’s announcement that the U.S. will bring home 30,000 troops by September of 2012 (about 85% of the Afghanistan coverage dealt with U.S. policy over there).

That echoes a theme found throughout much of the media’s treatment of the Afghanistan war over the years: that more than violence or events on the ground, it is policy decisions and deliberations in Washington that create spikes in otherwise limited coverage.

In the week of November 30-December 6, 2009, coverage peaked at 27% of the newshole with Obama’s announcement that he would be sending in an additional 30,000 troops to Afghanistan—a surge that was book-ended by last week’s drawdown announcement. In the week of June 21-27, 2010, when the war in Afghanistan accounted for 25% of the newshole, the focus was on another Rolling Stone report that brought attention to tensions between the Obama administration and Stanley McChrystal, then commander of U.S. forces there, about war strategy.

A look at all the Afghanistan coverage in the year 2011 so far, more than half—53%—is focused on the U.S. strategy and policy making process.

While Afghanistan coverage spiked higher than usual last week, coverage of the economy accounted for even more newshole—at 16%—than the war. That made it the No. 1 story, driven in large part by the intense debate in Washington over the nation’s debt limit.

At No. 3 was the presidential election, at 9%. Former Utah governor Jon Huntsman drew media attention when he officially entered the race. Minnesota Rep. Michele Bachmann drew some attention of her own by promoting her impending official entrance on Monday June 27.

Conflict in the Middle East continued to be among the top stories at No. 4 (6%). Last week, Syrian President Bashar al-Assad’s speech promising reforms made that country a particular focus of the regional coverage.

And the arrest late in the week of James ‘Whitey’ Bulger—a legendary Boston mob figure who had been on the run for more than 15 years—captivated news outlets to such an extent that it was the No. 5 story of the week at 5% of the newshole.

Beginning of the End in Afghanistan

At the heart of last week’s news coverage of the war in Afghanistan was Barack Obama’s televised address to the nation on Wednesday, June 22.

A Pew Research Center poll on June 21 revealed that, for the first time, a majority of Americans (56%) say that U.S. troops should return home as soon as possible. The media captured that national mood in last week’s coverage of Obama’s announcement by articulating the uncertainty, fatigue and lack of appetite for the war. Few news reports portrayed a robustly positive reception of Obama’s plan.

A USA Today article published the day after the speech (June 23) captured the sense of malaise in the president’s address: “President Obama heralded the beginning of the end of the nation’s 10-year war in Afghanistan on Wednesday, citing success in the battle against al-Qaeda and the Taliban but offering no guarantee that the nation’s heavy investment in lives and treasure will leave behind a stable and secure nation.”

On the liberal side of the cable dial, there was a sense of disappointment that Obama’s announced drawdown levels of 10,000 this year and 20,000 in 2012 were not enough, leaving 50,000 U.S. troops in the country for a longer period. “Does the president care that the public is almost uniformly in favor of getting U.S. troops out and fast?” asked MSNBC’s Rachel Maddow in her 9 p.m. program the night of the speech. “Those numbers are much higher than they once were. But he’s not changing his plan. Does he care about public opinion on this? And if he doesn’t, why doesn’t he?”

Even some conservative fatigue for the war could be felt last week. On the June 20 broadcast of NBC’s Today Show, chief White House correspondent Chuck Todd remarked that the war “has become a surprisingly divisive issue in the Republican party,” citing GOP contender Mitt Romney’s statement that “our troops shouldn’t go off and fight a war of independence for another nation” in direct reference to Afghanistan. 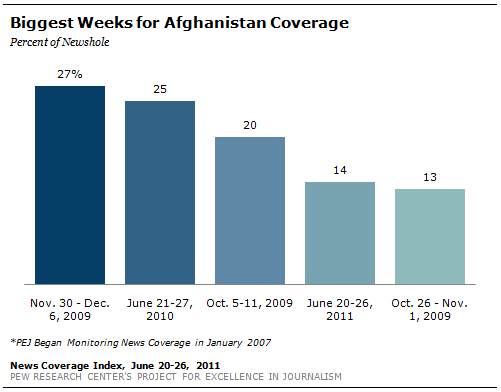 Though the president cast the decision in terms of success by the U.S. military effort, and the drawdown was in fact bigger than some had expected, the overall reaction was more mission creep than mission accomplished. According to the New York Times on June 23, “The withdrawal of the entire surge force by the end of next summer will significantly change the way that the United States wages war in Afghanistan, analysts said, suggesting that the administration may have concluded it can no longer achieve its loftiest ambitions there.”

The national debt was the chief focus of last week’s top story, the economy, as the bipartisan debt panel organized by vice president Joe Biden fell apart. About a third of the economy coverage focused on the departure of House Republicans Eric Cantor and John Kyl, who cited disagreements over process and over substance. Overall attention to the economy was up slightly from the week before, when it accounted for 14% of the newshole.

Much of the election-related media attention last week fell on Jon Huntsman, the former Republican governor of Utah who served as President Obama’s ambassador to China. Huntsman announced his candidacy for president last week, leaving journalists to decipher where exactly, given his various credentials, he falls on the partisan spectrum. At 9%, coverage was down from 15% the week before, when the GOP candidates debated in New Hampshire.

Unrest in the Middle East measured as the No. 3 story last week (6%), and as in weeks past, much of the media attention dwelt on Syria and Libya.

The arrest of James ‘Whitey’ Bulger became a late-week news sensation, dominating front pages and newscasts to such an extent that it filled 5% of the newshole for the week. Bulger, a mobster from Boston wanted on 19 murders, and was regarded with reverence and contempt by locals who knew him or knew of him, according to the press. A Los Angeles Times article June 26 reported that, “In Bulger’s former neighborhood, horror at the crimes prosecutors accuse him of committing is mixed with a certain respect for his ability to evade justice for so long, and for the way he provided for loyalists.”

After weeks of heavy press attention to New York Rep. Anthony Weiner, Barack Obama resumed his familiar spot as the top lead newsmaker of the week during June 20-26, the focus of 11% of stories studied. (To register as a dominant newsmaker, someone must be featured in at least 50% of a story.) 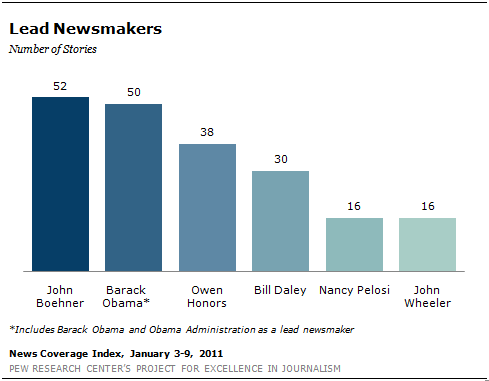 Behind Obama was ‘Whitey’ Bulger, the focus of 4% of stories, whose life of crime was detailed in all of its drama after his late-week arrest.

At No. 3 last week was GOP presidential candidate Huntsman, who formally entered the crowded Republican field of candidates for the 2012 election. He was the focus of 3% of stories last week.

Michelle Obama, was the No. 4 lead newsmaker (2%) as she traveled in South Africa last week with her two daughters. The last time the first lady ranked as one of the top newsmakers was the week of April 18-24, when the plane she was traveling came closer than it should have to a military jet.

Finally, at No. 5, was Casey Anthony, the woman charged with the murder of her two-year-old daughter. The trial, which had long been a staple of cable TV courtroom drama, neared its end last week as jurors were set to begin deliberations. Anthony was the focus of 1% of stories.