Barack Obama’s job approval rating has fallen slightly since the day after Osama bin Laden’s death was announced. But the balance of opinion regarding Obama’s job performance 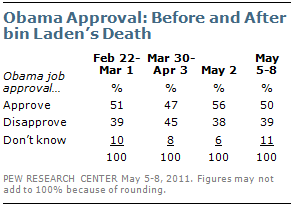 remains more positive than it was in early April. There also continues to be more optimism about the U.S. achieving its goals in Afghanistan than there was prior to bin Laden’s killing.

Currently, 50% approve of the way Obama is handling his job as president while 39% disapprove. In a May 2 poll by the Pew Research Center and The Washington Post, 56% approved while 38% disapproved. Obama’s current job rating represents an improvement from early April, when 47% approved of his job performance and nearly as many (45%) disapproved.

The latest national survey by the Pew Research Center for the People & the Press, conducted May 5-8 among 1,003 adults, finds that satisfaction with national conditions also is higher than it was before bin Laden’s killing. Currently 30% say they are satisfied with the way things are going in the country while 62% are dissatisfied. In the May 2 poll, 32% were satisfied and 62% dissatisfied. In mid-March, just 22% had a positive view of national conditions, while 73% were dissatisfied. 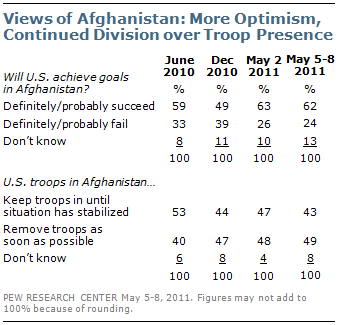 These views are little changed from the poll conducted May 2 (63% definitely/probably succeed vs. 26% definitely/probably fail). But there is far more optimism about U.S. success in Afghanistan today than there was last December, when just 49% said the U.S. would definitely or probably achieve its goals.

However, increased optimism about the chances for success in Afghanistan has not boosted support for maintaining U.S. forces in the country. Currently, 43% favor keeping U.S. troops in Afghanistan until the situation there has stabilized, compared with 49% who support removing the troops as soon as possible. That is little changed from the May 2 survey or from last December.

Republicans continue to be far more supportive of maintaining U.S. troops in Afghanistan than either independents or Democrats. In the new survey, 60% of Republicans favor keeping the troops there until the situation has stabilized; just 40% of independents and 36% of Democrats agree.

Obama Bump Recedes a Bit
Overview
About the Survey