The public continues to favor smaller government and remains critical of government performance. However, some of the anger at government that was evident during the 2010 election campaign has subsided.

Not surprisingly, feelings about government divide sharply along party lines, yet there are substantive divisions within the two parties’ broad electoral coalitions as well. And while preferences about the scope of government often correlate with beliefs about the efficiency of government, this is not always the case. 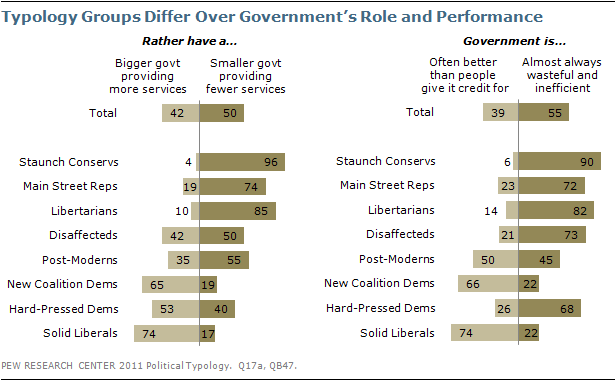 Most groups on the right (Staunch Conservatives, Main Street Republicans, and Libertarians) both want to see the size of government shrink and say government is almost always wasteful. Conversely, most Solid Liberals and New Coalition Democrats say they would rather have a bigger government providing more services, and say that government often does a better job than people give it credit for.

In contrast to other groups in the Republican constituency, however, Disaffecteds are more divided on the question of size of government. Like other Republican-oriented groups, they overwhelmingly say the government is nearly always wasteful and inefficient (73%). But when it comes to the size of government, they are nearly as likely to favor bigger government as smaller government (42% vs. 50%).

Among Democratic and Democratic-leaning groups, Post-Moderns are the only one in which a majority (55%) favors a smaller government providing fewer services. However, Post-Moderns are not highly critical of government performance: 50% say the government often does a better job than people give it credit for while 45% say it is almost always wasteful and inefficient.

Most Groups Distrustful of Government

The anger with government that marked the tone of the 2010 elections has ebbed to some extent: Currently, 14% say they are angry with the federal government, down from 23% in September 2010. (See “Fewer Are Angry at Government, But Discontent Remains High,” March 3, 2011.)

Still, high percentages across all typology groups say they are distrustful of government. Levels of trust vary considerably across the typology. While Post-Moderns are no fans of bigger government, they are relatively trusting: They are the only group in which nearly half (46%) say they trust the government in Washington to do what is right always or most of the time. 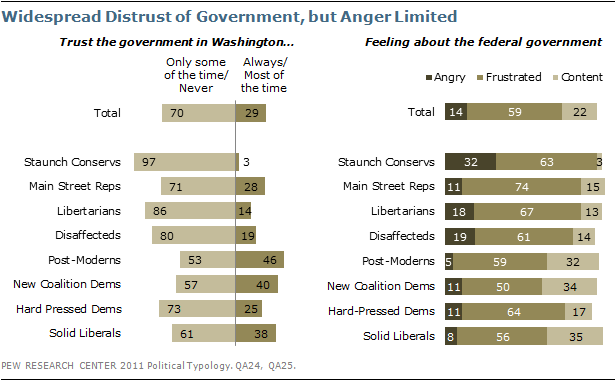 On the left, Hard-Pressed Democrats diverge from other Democratic groups in their relatively low level of trust in the federal government; 25% trust government most or all of the time, compared with 40% of New Coalition Democrats and 38% of Solid Liberals. 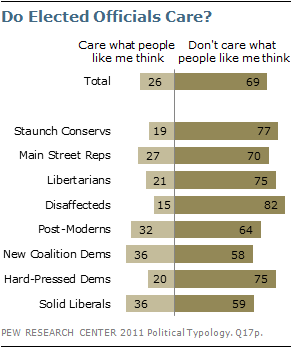 As a whole, Americans are cynical about elected officials, with most saying politicians don’t care what average Americans think (69%) and that they lose touch with voters back home quickly (72%). As with trust and anger, most Democratic and Democratic-leaning groups are less cynical than the Republican groups. There are few significant differences across the Republican and Republican-leaning groups.

There is broad agreement about Congress – most groups view it negatively. Across seven of the eight groups, clear majorities give the institution an unfavorable rating. New Coalition Democrats are an exception in their slightly more favorable opinions; they are about equally likely to have a favorable (42%) as an unfavorable (44%) view of Congress. 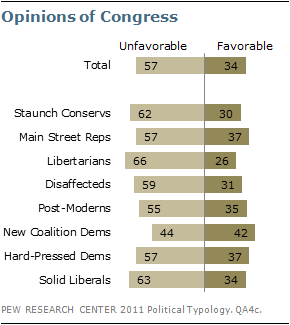 The intensity of negative opinions of Congress varies across groups. Main Street Republicans are more temperate in their criticism than other groups on the right; 16% have a very unfavorable impression of Congress compared with a quarter or more of those in the other three Republican and GOP-leaning groups.

Among groups on the left, Hard-Pressed Democrats are the most likely to have very unfavorable views of Congress (27% compared with 17% or less among the other three Democratic and Democratic leaning groups). 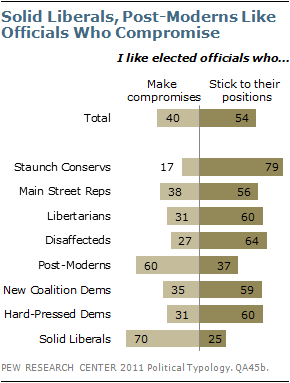 Solid majorities in six of the eight typology groups say they prefer elected officials who stick to their positions over those who make compromises with people they disagree with. Not surprisingly, this is the overwhelming view of Staunch Conservatives who favor politicians with conviction over those who compromise by a 79%-to-17% margin.

In pronounced contrast to other groups, clear majorities of both Solid Liberals (70%) and Post-Moderns (60%) say they prefer politicians willing to compromise over those who stick to their positions.

Approach to the Constitution

While Americans as a whole are divided over whether the Supreme Court should base its rulings on what the Constitution means in current times (50%) or what it meant as originally written (45%), most typology groups have a clear preference for one of these approaches. 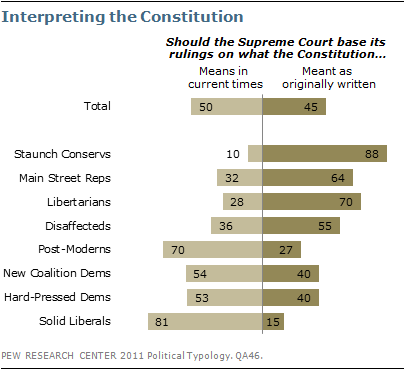 On the Democratic side of the political spectrum, Solid Liberals are the strongest proponents of the Court basing its rulings on its understanding of what the Constitution means in current times (81% say this; just 15% favor an originalist approach). The Democratic-leaning Post-Moderns also overwhelmingly favor interpreting the Constitution in the context of current times (70% vs. 27% originally written). New Coalition and Hard-Pressed Democrats are more divided. Slim majorities of both groups say the nation’s highest court should base its decisions on current understanding of the Constitution. 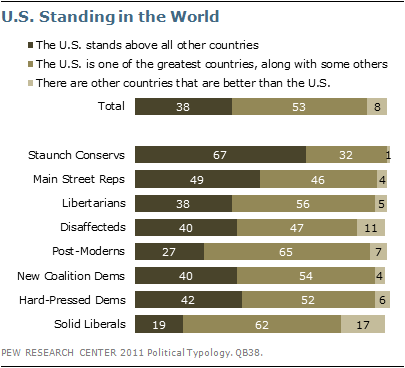 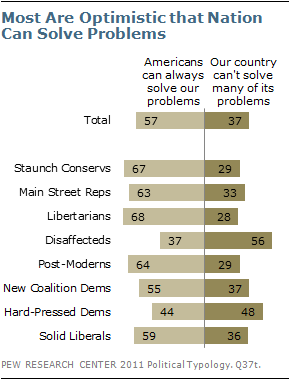 For the most part, the public believes that as Americans we can always find ways to solve our problems and get what we want; 57% express this view. About four-in-ten (37%) say this country cannot solve many of its important problems.

Next: Section 6: Obama, 2012, and the Tea Party
← Prev Page
Page3Page4Page5Page6You are reading page7Page8Page9Page10Page11Page12Page13
Next Page →