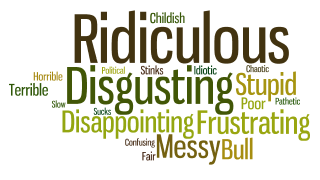 The public has an overwhelmingly negative reaction to the budget negotiations that narrowly avoided a government shutdown. A weekend survey by the Pew Research Center for the People & the Press and the Washington Post finds that “ridiculous” is the word used most frequently to describe the budget negotiations, followed by “disgusting,” “frustrating,” “messy,” “disappointing” and “stupid.”

The full survey was conducted April 7-10 among 1,004 adults; people were asked their impressions of the budget talks in interviews conducted April 9-10, following the April 8 agreement that averted a government shutdown.

All of the principals in the budget showdown are blamed to some extent for the dispute that nearly resulted in the shutdown. Nearly four-in-ten (37%) say they blame Republican congressional leaders “a lot” for the dispute, while 33% say Democratic congressional leaders deserve a lot of blame and 32% say the same about President Obama. About a quarter (27%) say that representatives affiliated with the Tea Party movement deserve a lot of blame. 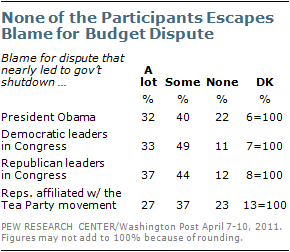 Opinions about how much blame the participants deserve changed after the agreement was concluded. In interviewing conducted prior to the deal (April 7-8), 58% said that Tea Party representatives would deserve either a lot or some blame if the government shut down. In polling conducted April 9-10, the number saying Tea Party representatives deserve a least some blame for the dispute jumped to 72%. 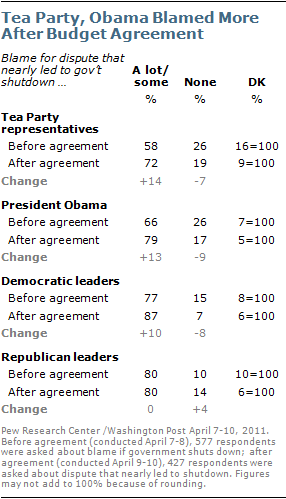 Budget Negotiations in a Word - "Ridiculous"
Overview
About the Survey