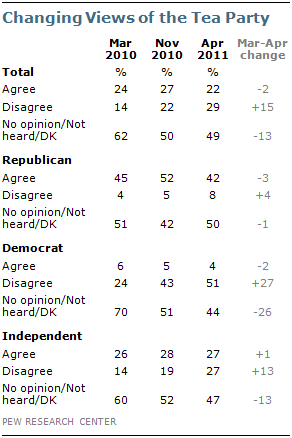 The latest national survey by the Pew Research Center for the People & the Press, conducted March 30-April 3, among 1,507 adults, finds that 29% say they disagree with the Tea Party, while fewer (22%) agree; nearly half (49%) say they do not have an opinion either way. Since last March, the percentage saying they disagree with the movement has grown 15 points while the percentage saying they agree with the Tea Party has remained mostly unchanged (24% March 2010, 22% April 2011.).

As Democrats have become more aware of the Tea Party, negative views have increased dramatically. In March 2010, just 24% of Democrats said they disagreed with the movement – a percentage that has more than doubled into a 51%-majority opinion today. Very few Democrats – now, or at any point over the last year – say they agree with the Tea Party.

Republicans have consistently been far more likely to agree than disagree with the Tea Party (currently: 42% agree, 8% disagree). Positive views were especially high immediately following Republican gains in the 2010 midterms, when 52% said they agreed with the Tea Party. A consistent positive balance of opinion notwithstanding, the Tea Party does not register with fully half of Republicans: 50% do not offer an opinion of the movement either way – almost identical to the 51% who did not offer an opinion in March 2010. 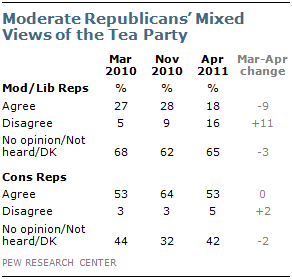 Currently, moderate and liberal Republicans are as likely to agree (18%) as disagree (16%) with the Tea Party; most (65%) do not offer an opinion of the movement. In March 2010, the Tea Party was seen in a far more favorable light by non-conservative Republicans. By a 27%-5% margin, more agreed than disagreed with the movement.