Before you read the report, we invite you to test your own News IQ by taking the latest interactive knowledge quiz now available on the Pew Research Center website. The short quiz includes many of the questions that were included in a national poll. Participants will instantly learn how they did on the quiz in comparison with the general public as well as with people like them.

The public is generally aware of basic facts about several recent national and international news stories, but is much less knowledgeable about current politics in Washington, according to the Pew Research Center’s latest News IQ survey.

About seven-in-ten know that Hillary Clinton currently serves as U.S. secretary of state (73%) and that Moammar Gadhafi is the leader of Libya (71%). An even higher percentage (80%) knows that that the “No Child Left Behind” law deals with education policy.

Yet Americans continue to struggle with questions about Congress and its leaders. Just 38% correctly say that Republicans hold a majority of seats in the House – and not in the Senate or the full Congress. Shortly after the midterm elections in November, slightly more (46%) knew that the Republicans had a majority only in the House. 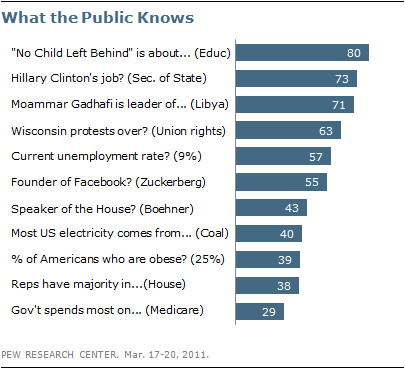 And only about four-in-ten (43%) are able to correctly identify John Boehner as House speaker; 19% say incorrectly that Nancy Pelosi is still speaker of the House. In November, shortly after the GOP won the House, 38% named Boehner as the presumptive speaker and 13% named Pelosi.

The latest News IQ Quiz, conducted Mar. 17-20 among 1004 adults, also finds that many Americans have a hard time answering detailed questions about U.S. government spending. Roughly three-in-ten (29%) correctly say that the federal government spends more on Medicare than on scientific research, education or on interest on the national debt. Slightly more (36%) say that interest on the debt is the greater government expenditure.

As in the past, however, most Americans (57%) are able to correctly estimate the unemployment rate (currently about 9%). A majority (63%) also knows that the main focus of the recent protests and political debates in Wisconsin was on union bargaining rights.

Reflecting his growing visibility, 55% identify Mark Zuckerberg as the founder of the social networking site Facebook. This is the only question on the survey that far more of those younger than 30 answered correctly than those age 65 and older (63% vs. 25%).

Congress a Mystery to Many 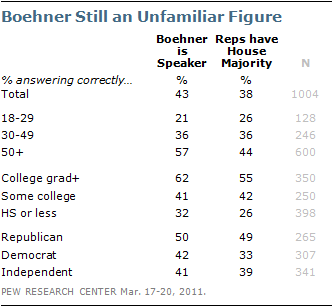 Republicans are more likely than Democrats to be aware of the details of divided power in Washington. Still, only about half of Republicans (49%) know that the GOP controls only the House, compared with 39% of independents and just 33% of Democrats.

Young people are only dimly aware of the new balance of power in Washington. Just 26% of those younger than 30 think that Republicans have a majority only in the House and 21% correctly name Boehner as speaker. About as many (29%) name Nancy Pelosi as House speaker.

Pew Research Center news interest surveys have found that while the 2010 elections and their aftermath garnered strong public interest and intense media coverage, much of the focus in the first few months of 2011 has been on breaking news – such as the upheaval in the Middle East and Northern Africa and the deadly earthquake and tsunami in Japan. In recent weeks, domestic politics – even the early stages of the 2012 presidential campaign – have gotten little attention. (See “Public Stays Focused on Japan as Media Turns to Libya” March 30, 2011.) 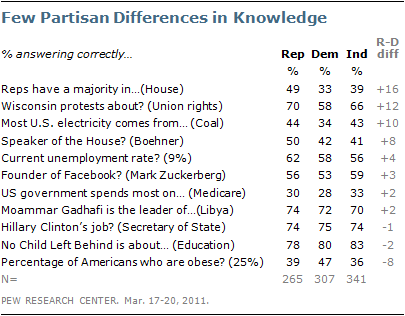 On most questions partisan differences are slight. Republicans are more likely than Democrats to correctly answer three of the 11 questions.

Seven-in-ten (70%) Republicans know that public employee union rights were the subject of protests in Wisconsin, compared with 58% of Democrats. Republicans are more likely to know that the GOP controls the House (49% vs. 33%) and that coal is the leading source of U.S. electricity (44% vs. 34%). 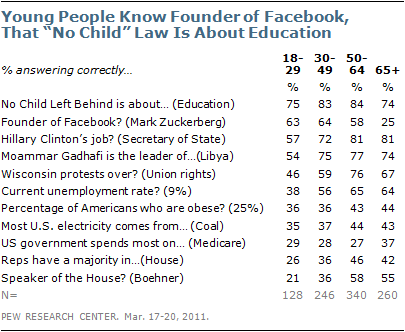 As in past installments of the News IQ Quiz, young people struggle with questions about politics and economics, but are better informed on technology questions.

Six-in-ten (63%) of those younger than 30 know that Mark Zuckerberg is the founder of Facebook. That compares with just 45% of those over 50 who know this.

Notably, three-quarters of young people (75%) also know that the “No Child Left Behind” law deals with education. Majorities across demographic and political groups correctly answered this question.

But young people are far less likely than older Americans to know that Moammar Gadhafi is the leader of Libya. About half (54%) say correctly that Gadhafi is the leader of Libya, 15% say he leads Egypt and 28% do not know. Large majorities in older age groups associate Gadhafi with Libya. (The survey was conducted March 17-20; the United States and its allies launched airstrikes against Gadhafi’s forces on March 19.)

Similarly, 46% of young people know that the protests in Wisconsin focused on unions rights for public employees. Majorities across older age groups were aware of this. And as in previous surveys, most young people are unable to correctly estimate the unemployment rate; 38% answered this correctly.

Well Known: Clinton and Gadhafi; Little Known: Who Controls Congress
OverviewCongress a Mystery to ManyPartisan Differences in KnowledgePersistent Age Gap in Knowledge
About the Survey