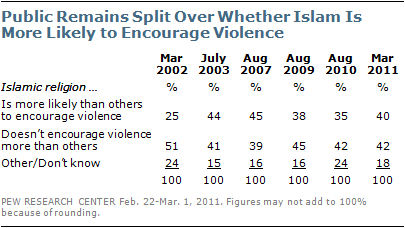 These opinions have changed little in recent years. But in March 2002, just 25% saw Islam as more likely to encourage violence while twice as many (51%) disagreed.

The national survey by the Pew Research Center for the People & the Press, conducted Feb. 22-March 1 among 1,504 adults, finds that most young people reject the idea that Islam is more likely than other religions to promote violence. Nearly six-in-ten (58%) of those younger than 30 say Islam does not encourage violence more than other religions; 31% say it does. By contrast, a plurality o

f those 50 and older (45%) say Islam is more likely to encourage violence.

Political and ideological divisions are even wider: By roughly three-to-one (66% to 21%), conservative Republicans say Islam encourages violence more than other religions. Moderate and liberal Republicans are divided – 46% say Islam is more likely to encourage violence, 47% say it is not.

By more than two-to-one (61% to 29%), liberal Democrats say that Islam is not more likely than other religions to promote violence. Conservative and moderate Democrats, by a smaller margin (48% to 31%), agree.

A clear majority of white evangelical Protestants (60%) say that Islam is more likely to encourage violence than are other religions. Far fewer white mainline Protestants (42%) and white Catholics (39%) express this view. And by nearly two-to-one (56% to 30%), the religiously unaffiliated say that the Islamic religion does not encourage violence more than others.

After Boston, Little Change in Views of Islam and Violence
Most Think the U.S. Has No Responsibility To Act in Iraq
Public Remains Conflicted Over Islam
Views of Muslim-Americans Hold Steady After London Bombings
Views of Islam Remain Sharply Divided