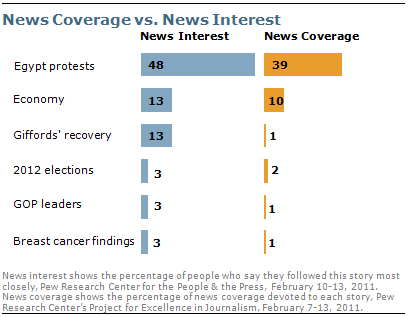 The sudden conclusion to Hosni Mubarak’s 30-year reign in Egypt dominated both news coverage and the public’s news interest last week. Fully 48% say they followed news about Egyptian protests and Mubarak’s resignation more closely than any other story, far surpassing the week’s other stories.

The news media devoted 39% of coverage to the various elements of the Egypt story, according to a separate analysis conducted by the Pew Research Center’s Project for Excellence in Journalism. 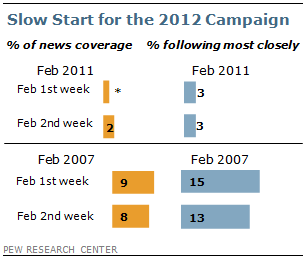 This past week, just 2% of all coverage was devoted to the 2012 presidential election (including news about the Conservative Political Action Conference last weekend), and just 3% of the public cited news about possible presidential candidates as their top story.

The 2012 campaign has gotten off to a much slower start when compared with the previous presidential election campaign. At a comparable point in early 2007, 8% of all news coverage was devoted to the campaign and 13% said it was the story they were following most closely.

The current campaign has clear differences with the previous contest. Unlike four years ago, only one party – the Republican Party – has a contested nomination. Moreover, no major GOP candidate has entered the 2012 race. By January, 2007, more than a dozen candidates from both parties had already announced their candidacies. (For more on coverage of the 2012 campaign, see “A Slow Start to the Media Primary,” released Feb. 2 by Pew Research’s Project for Excellence in Journalism.)

While the media has devoted considerable coverage to events in Egypt, most Americans do not see the coverage as excessive.

A majority (55%) says that news organizations have given the “right amount” of attention to the Egyptian protests. Three-in-ten (30%) say the press has over covered events there, while relatively few (9%) say there has been too little coverage of the story.

As many Republicans as Democrats say that possible presidential candidates have received too little coverage (28% each). Democrats are more likely to say that there has been too much election coverage (24% vs. 15%).

More than four-in-ten Americans (44%) say the activities of new Republican leaders in Congress received the right amount of attention, about a quarter (27%) say these stories were under covered and just 18% say there was too much news about this. Policymaking efforts lead by GOP lawmakers accounted for 1% of the newshole.

Other News of the Week

About one-in-four (26%) say they followed news about Congresswomen Gabrielle Giffords’ ongoing recovery very closely. Democrats (34%) were more likely than Republicans (23%) or independents (22%) to say they were following this story very closely. The media devoted 1% of coverage to Rep. Giffords’ progress.

Interest in economic news has changed little in recent weeks. Last week, 36% were following the economy very closely; and the media, for its part, devoted 10% of all coverage to the economy.

A new study indicating that lymph node surgery may be unnecessary in some cases for treatment of breast cancer was very closely followed by 11% of the public and the top story for 3% of Americans. Women are somewhat more likely than men to say they tracked this story closely: A third of women (33%) followed this news very or fairly closely compared with 19% of men. The announcement of new medical guidelines about when women should get mammograms attracted more public interest in Nov. 2009. Fully, a third of the public (34%) followed that story very closely.

Two-in-ten Americans (19%) very closely followed the activities of new GOP leaders on Capitol Hill this past week. Public interest is equal to that of Feb. 1995, when 19% said they were following news about the Republican Congress very closely.

These findings are based on the most recent installment of the weekly News Interest Index, an ongoing project of the Pew Research Center for the People & the Press. The index, building on the Center’s longstanding research into public attentiveness to major news stories, examines news interest as it relates to the news media’s coverage. The weekly survey is conducted in conjunction with The Project for Excellence in Journalism’s News Coverage Index, which monitors the news reported by major newspaper, television, radio and online news outlets on an ongoing basis. In the most recent week, data relating to news coverage were collected February 7 – 13, and survey data measuring public interest in the top news stories of the week were collected February 10-13, from a nationally representative sample of 1,000 adults.

The analysis in this report is based on telephone interviews conducted February 10-13, 2011 among a national sample of 1,000 adults 18 years of age or older living in the continental United States (670 respondents were interviewed on a landline telephone, and 330 were interviewed on a cell phone, including 131 who had no landline telephone). The survey was conducted by interviewers at Princeton Data Source under the direction of Princeton Survey Research Associates International. A combination of landline and cell phone random digit dial samples were used; both samples were provided by Survey Sampling International. Interviews were conducted in English. Respondents in the landline sample were selected by randomly asking for the youngest adult male or female who is now at home. Interviews in the cell sample were conducted with the person who answered the phone, if that person was an adult 18 years of age or older. For detailed information about our survey methodology, see: https://www.pewresearch.org/politics/methodology/detailed.

Summary of FindingsLittle Coverage, Interest in 2012Most See Right Amount of Egypt CoverageOther News of the WeekAbout the Survey