As Congress begins with a new Republican majority in the House of Representatives, about a third (34%) of Americans approve of GOP congressional leaders’ policies and plans for the future; 43% disapprove. Public approval of Republican plans has declined by seven points since the party won back the House in November’s election; two months ago 41% approved and 37% disapproved of their plans. 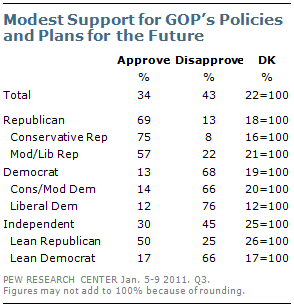 About seven-in-ten (69%) Republicans now approve of their party leadership’s plans and policies, compared with just 13% of Democrats. And while 30% of independents approve of GOP leaders’ plans, far more (45%) disapprove.

Over the same time frame, approval of the GOP congressional agenda has dropped by nine points among independents (from 39% to 30%). Republican-leaning independents are far less supportive of Republican plans and policies than they were in November; 50% currently approve, down from 67% two months ago. Approval among Democratic-leaning independents – and Democrats – has not changed significantly since November (currently 17% and 13%, respectively).

The public is pessimistic about the relationships between the two parties in Washington over the coming year. By about a two-to-one margin, more say that Republicans and Democrats in the capital will bicker and oppose one another more than usual (63%) rather than work together more to solve problems (30%). At the start of the Obama administration and the last Congress two years ago, more Americans predicted increased cooperation than opposition (50% vs. 39%). The current predictions are roughly on par with the public’s forecasts at the start of George W. Bush’s second term in January 2005.

Opinions about the expected level of cooperation between the parties are about the same across partisan groups: Only about three-in-ten Republicans (30%), Democrats (28%) or independents (30%) say they expect the parties in Washington to work together more in 2011. This is comparable to partisan opinions in January 2005. In January 2009, all groups were more optimistic about improving relations than they are today, although Democrats were considerably more positive about prospects for partisan cooperation than were Republicans.

Most Want Opposing Sides in Washington to Cooperate 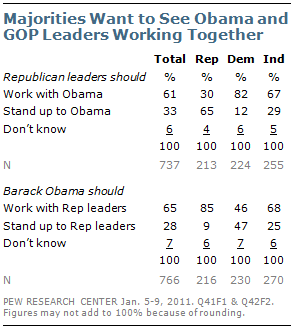 Despite gloomy forecasts about whether the two parties will work together this year, majorities would like to see Republican leaders and Barack Obama try to work with each other, even if it means disappointing some of their supporters. 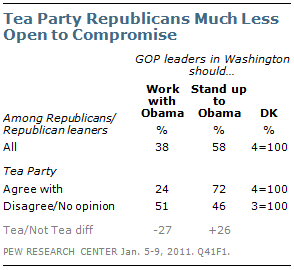 While Democrats are divided about what Obama should do (46% say work with the GOP, 47% say stand up to them), Republicans are about twice as likely to say their leadership should stand up to Obama as to say it should work with him (65% vs. 30%).

Impressions of the Tea Party 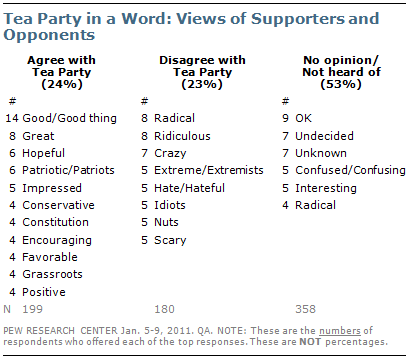 The Tea Party movement draws a range of reactions when people are asked to describe their impression of it in a single word. Although no one word is mentioned by more than 2% of people, among the most commonly mentioned words are some positive (good, great), some negative (radical, crazy, ridiculous) and some neutral (OK, undecided, confused, conservative). In April 2010, the balance of the top words mentioned was somewhat more positive (great, interesting, patriots, good, needed), although less flattering words were also relatively high on the list (ridiculous, misinformed, radical, stupid). 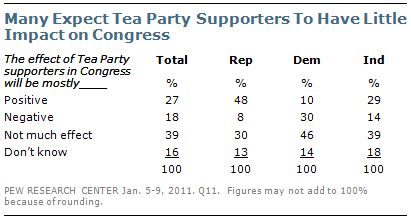 Nearly half of Republicans (48%) say members associated with the Tea Party movement will have a positive effect, compared with 29% of independents and just 10% of Democrats. 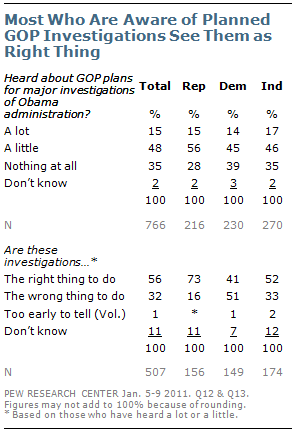 About six-in-ten Americans (63%) say they have heard either a lot (15%) or a little (48%) about the plans by Republican leaders in Congress to open major investigations into how the government has operated under the Obama administration. In a separate survey conducted concurrently, the Pew Research Center’s News Interest Index finds that these plans rank lower in public awareness than other items on the GOP’s agenda, including efforts to repeal the health care law (49% heard a lot, 32% a little) and proposed spending cuts (31% heard a lot, 41% a little).