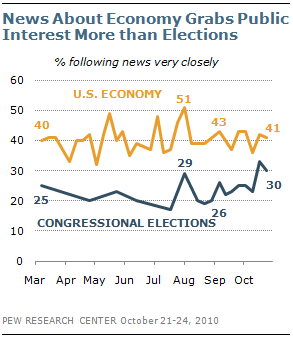 While the media provided heavy coverage of the congressional elections last week, the public continued to track news about the nation’s struggling economy more closely than news about the midterm vote.

Election news dominated coverage, accounting for 38% of the newshole, according to a separate analysis by the Pew Research Center’s Project for Excellence in Journalism (PEJ). The economy was a distant second, accounting for 12% of coverage.

Throughout 2010, larger percentages of the public have said they are following news about the economy very closely than have said the same about election news. Though the public’s interest in election news has increased in recent weeks, the pattern set earlier in the year still holds. 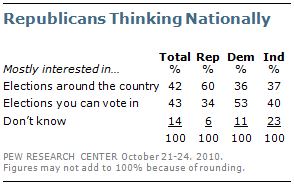 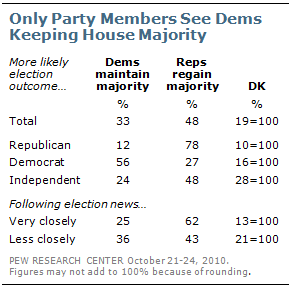 Republicans remain confident. Nearly eight-in-ten (78%) say it is likely that their party will regain the majority it lost in 2006. A majority of Democrats (56%), however, says they think it is more likely their party will maintain control of the House. That is essentially unchanged from the 55% of Democrats saying this earlier in October. 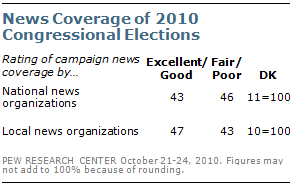 The public gives mixed ratings to the media for the job they have done covering the midterm elections, both nationwide and locally. More than four-in-ten (43%) say news organizations have done an excellent (8%) or good (35%) job covering elections around the country; 46% judge the performance as only fair (30%) or poor (16%).

Looking at coverage of state and local elections, 47% say news organizations have done an excellent (11%) or good (36%) job covering these contests; 43% say coverage of these races has been only fair (29%) or poor (14%). Differences among partisans on both the national and local levels are small. 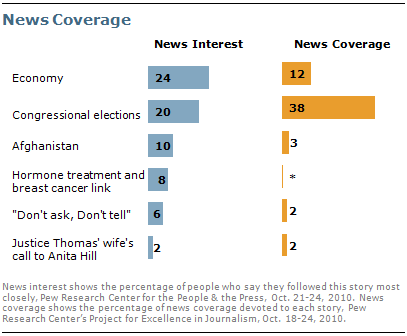 The public continues to track the ups and downs of the U.S. economy closely. About four-in-ten (41%) say they followed news about the economy very closely last week, while 24% say this was the news they followed most closely. Economic news accounted for 12% of the coverage measured by PEJ.

One-in-ten (10%) say they followed news about Supreme Court Justice Clarence Thomas’s wife calling Anita Hill to seek an apology for her harassment claims during the justice’s 1991 confirmation hearings. Democrats (14%) are slightly more likely to say they followed this story very closely than Republicans (8%) or independents (8%). Just 2% say this was the story they followed most closely; news about the call from Ginni Thomas to Anita Hill accounted for 2% of coverage. 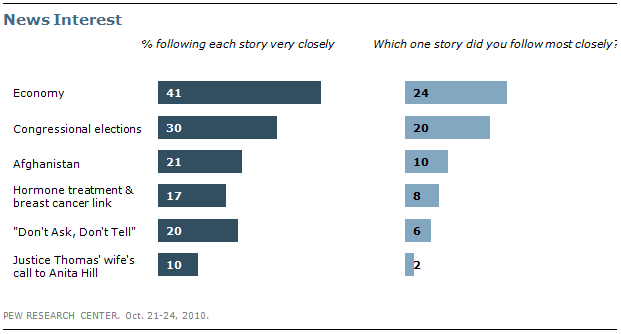 These findings are based on the most recent installment of the weekly News Interest Index, an ongoing project of the Pew Research Center for the People & the Press. The index, building on the Center’s longstanding research into public attentiveness to major news stories, examines news interest as it relates to the news media’s coverage. The weekly survey is conducted in conjunction with The Project for Excellence in Journalism’s News Coverage Index, which monitors the news reported by major newspaper, television, radio and online news outlets on an ongoing basis. In the most recent week, data relating to news coverage were collected October 18-24, and survey data measuring public interest in the top news stories of the week were collected October 21-24, from a nationally representative sample of 1,006 adults.

Results for this survey are based on telephone interviews conducted under the direction of Princeton Survey Research Associates International among a national sample of 1,002 adults living in the continental United States, 18 years of age or older, from October 21-24, 2010 (673 respondents were interviewed on a landline telephone, and 333 were interviewed on a cell phone, including 133 who had no landline telephone). Both the landline and cell phone samples were provided by Survey Sampling International. Interviews were conducted in English.