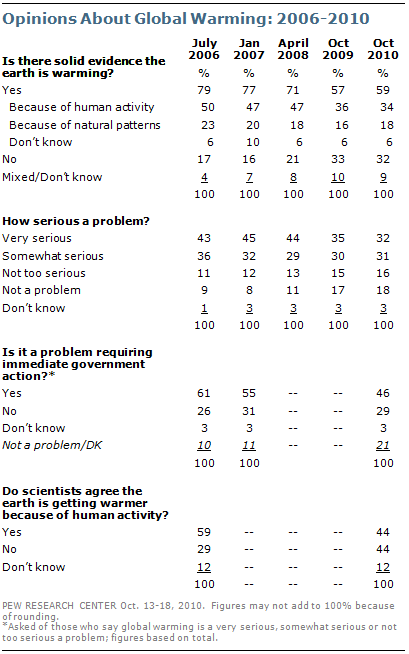 Views about the existence and causes of global warming have changed little over the past year. A new Pew Research Center poll finds that 59% of adults say there is solid evidence that the earth’s average temperature has been getting warmer over the past few decades. In October 2009, 57% said this.

Roughly a third (34%) say that global warming is occurring mostly because of human activity, such as the burning of fossil fuels, which also is little changed from last year (36%).

The latest national survey by the Pew Research Center for the People & the Press, conducted Oct. 13-18 among 2,251 adults reached on landlines and cell phones, finds that 32% say global warming is a very serious problem while 31% think it is somewhat serious. A year ago, 35% described global warming as a very serious problem and 30% said it was somewhat serious.

In 2006, far more Americans said there was solid evidence that the average temperature has been rising over the past few decades. In July of that year, 79% believed there was evidence of global warming, and half (50%) said it was mostly caused by human activity. Much of the change in attitudes about global warming occurred between April 2008 and last fall, with the decline coming mostly, though not entirely, among Republicans and independents. (See “Fewer Americans See Solid Evidence of Global Warming,” Oct. 22, 2009).

Two other indicators of opinion on the issue were not included in the October 2009 survey, and both show significant changes from earlier polls. Currently, 46% of the public says global warming is a problem that requires immediate government action. In July 2006, 61% said the issue needed immediate action. This decline is mostly a consequence of the fact that fewer now say global warming is a problem.

The new survey finds continuing support for a range of policies to address the nation’s energy supply, including requiring improved vehicle fuel efficiency and increasing federal funding for research on wind, solar and hydrogen technology. Support for allowing more offshore oil and gas drilling – which declined during the Gulf of Mexico oil leak – has rebounded modestly. Currently, 51% favor allowing more offshore oil and gas drilling, up from 44% in June.

Views about climate change continue to be sharply divided along party lines. A substantial majority of Democrats (79%) say there is solid evidence that the average temperature on earth has been increasing over the past few decades, and 53% think the earth is warming mostly because of human activity. Among 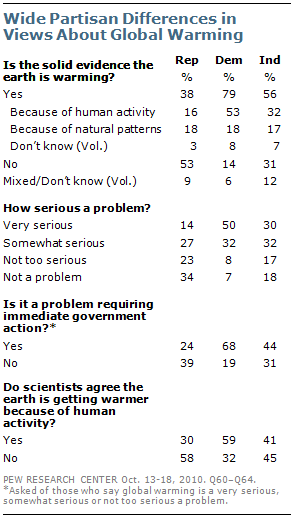 Republicans, only 38% agree the earth is warming and just 16% say warming is caused by humans. Roughly half of Republicans (53%) say there is no solid evidence of warming. These patterns are little changed from a year ago.

More than half of independents (56%) say there is solid evidence of warming, but just 32% think it can mostly be attributed to human actions. Opinions among independents who lean toward the Republican Party or Democratic Party are similar to those of partisans.

Democrats also are more likely to perceive a scientific consensus on the issue; 59% say most scientists agree that the earth is warming mostly due to human activity, while 32% think scientists do not agree. The reverse is true of Republicans; only 30% see scientific agreement while 58% think most scientists do not agree that the earth is getting warmer because of human activity. Independents are divided in their view (41% think scientists agree, 45% say they do not). 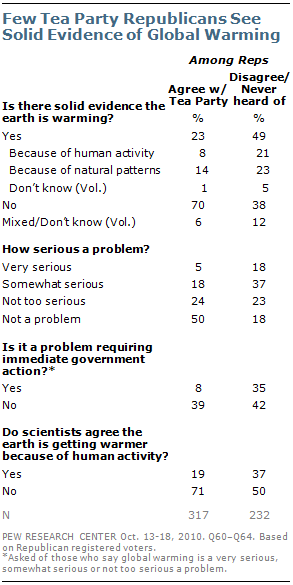 The Tea Party and Global Warming

Republicans who agree with the Tea Party movement are much more likely than other Republicans to say that there is no solid evidence that the earth’s temperature has been rising.

Among Republican registered voters who agree with the Tea Party, fully 70% do not think there is solid evidence that the average temperature on earth is warming. By comparison, only 38% of Republican voters who disagree with the Tea Party or who have never heard of the movement express this view. Half (50%) of Tea Party Republican voters also say global warming is not a problem at all; 24% say it is not too serious, and just 8% think it is a problem that requires immediate government action. 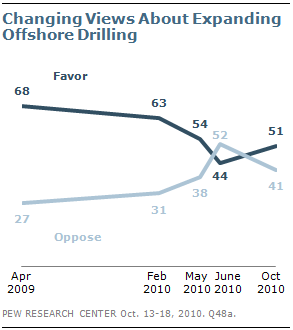 Currently, 51% of Americans favor allowing more offshore oil and gas drilling in U.S. waters while 41% are opposed. In June, during the Gulf of Mexico oil leak, there was more opposition (52%) than support (44%) for increased offshore drilling.

There continues to be a wide partisan gap in views about drilling in U.S. waters, and the gap has grown larger since February of this year. About three-quarters (74%) of Republicans favor expanded offshore oil and gas drilling, identical to the proportion who expressed support early this 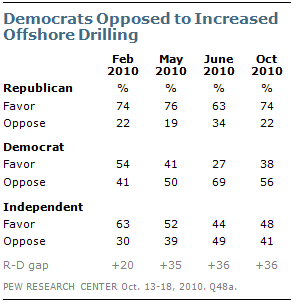 Independents are now mostly divided in their opinion (48% favor, 41% oppose). In February, they favored increased offshore drilling by a 63% to 30% margin.

There is broad public support for a variety of other proposals to address the nation’s energy situation. About eight-in-ten (79%) favor requiring better fuel efficiency for cars, trucks and SUVs, and 74% support increasing federal funding for research on wind, solar and hydrogen technology. 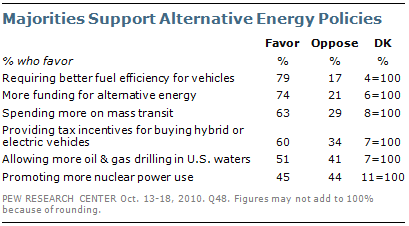 systems (63%) and providing tax incentives for buying hybrid or electric cars, trucks and SUVs (60%). By contrast, the public continues to be divided about promoting the increased use of nuclear power (45% favor, 44% oppos
e). 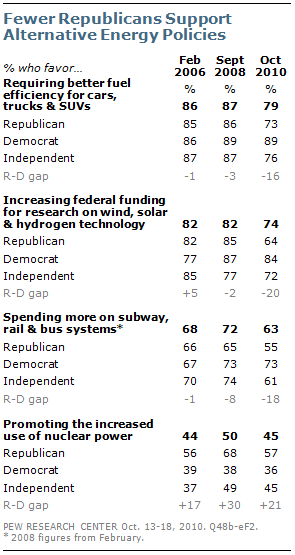 There has been a modest decline since 2008 in support for requiring better fuel efficiency for vehicles, increasing federal funding for research on alternative energy and spending more on mass transit.

A majority of Republicans continue to support these policies, but fewer do so now than in 2008 or 2006. In the current survey, 73% of Republicans favor requiring better fuel efficiency for cars, trucks and SUVs, down from 86% two years ago and 85% in February 2006. Similarly, 64% of Republicans favor increasing federal funding for research on wind, solar and hydrogen technology, down 21 points from two years ago. Republican support for spending more on subway, rail and bus systems has also declined — from 65% in 2008 to 55% now.

Opinion among independents also has shifted. About three-fourths (76%) of independents favor higher fuel efficiency standards, down from 87% in 2008 and 2006. Similarly, 72% of independents support increased funding for alternative energy, down 13 points since 2006. And somewhat fewer favor spending more on mass transit (61% now, 74% in 2008).

By contrast, support among Democrats for increased spending on alternative energy and mass transit and better fuel efficiency requirements has remained steady or increased slightly over the past few years. In 2006 and even 2008, the partisan differences in opinion about these policies were quite small, but now the gaps between Republicans and Democrats are 16 points or more.