The Congressional Connection Poll is a collaboration of the Pew Research Center for the People & the Press and the National Journal, sponsored by the Society for Human Resource Management (SHRM). The
survey is conducted weekly when Congress is in session, and each week’s survey focuses on themes and issues related to Congress and the political process.

Results for this survey are based on telephone interviews conducted under the direction of Princeton Survey Research Associates International among a national sample of 1,006 adults living in the continental United States, 18 years of age or older, from October 21-24, 2010 (673 respondents were interviewed on a landline telephone, and 333 were interviewed on a cell phone, including 133 who had no landline telephone). Both the landline and cell phone samples were provided by Survey Sampling International. Interviews were conducted in English.

The combined landline and cell phone sample are weighted using an iterative technique that matches gender, age, education, race, Hispanic origin, region, and population density to parameters from the March 2009
Census Bureau’s Current Population Survey. The sample also is weighted to match current patterns of telephone status, based on extrapolations from the 2009 National Health Interview Survey. The weighting procedure also accounts for the fact that respondents with both landline and cell phones have a greater probability of being included in the combined sample and adjusts for household size within the landline sample.
Sampling errors and statistical tests of significance take into account the effect of weighting. 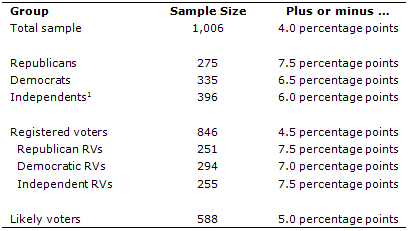 Likely voters in this survey are identified using a 3-item turnout scale that includes the following questions: scale10, pvote08a, and interest in campaign news (pew.1b, released separately). More details about the Pew Research Center’s methodology for estimating likelihood to vote are available at: https://www.pewresearch.org/politics/methodology/

Midterm Snapshot: Enthusiasm for Obama Reelection Bid Greater Than for Reagan in 1982
About the Survey