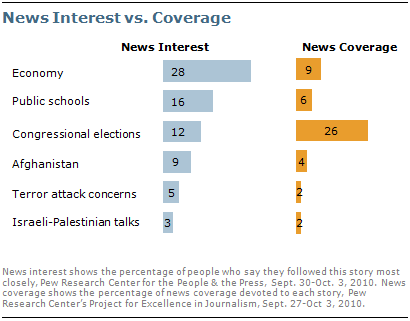 The 2010 congressional elections dominated news coverage last week, but not the public’s attention. Americans continued to focus most closely on news about the nation’s struggling economy and about four-in-ten (39%) say news reports portray the economy “about the way it really is.”

Smaller, roughly equal percentages say the media make the economy seem worse (28%) or better (27%) than it actually is, according to the latest News Interest Index survey of 1,002 adults conducted Sept. 30-Oct. 3 by the Pew Research Center for the People & the Press.

The media devoted 26% of its coverage to the November midterms, nearly three times the 9% of newshole taken up by economic news, according to a separate analysis by the Pew Research Center’s Project for Excellence in Journalism.

As the economic crisis worsened in 2008, the percentage of Americans that said news reports were portraying the economy as worse than it actually was rose slightly from June to October. This year, as the recovery slowed, perceptions of economic coverage changed little between June and October.

The changes in perceptions of media coverage since October 2008, however, vary dramatically by party. Two years ago, more than half of Republicans (55%) said the press made the economy seem worse than it really was, a view 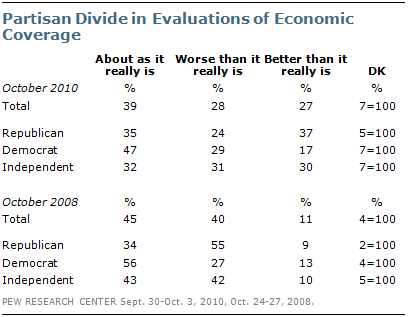 The changes have been much more subtle among Democrats. Currently, 29% of Democrats say the press portrays the economy as worse than it really is, virtually the same as two years ago. Still, Democrats are slightly less likely to say the press is getting it right when it comes to the economy than they were in 2008 (56% then, 47% now).

How the Press Covers Education, the Terrorism Threat, Afghanistan 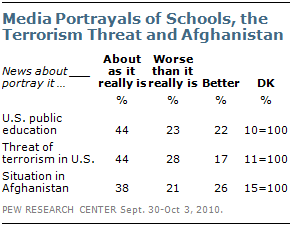 Roughly four-in-ten Americans say news reports portray the U.S. public education system (44%), the threat of terrorism in the U.S. (44%) and the situation in Afghanistan (38%) about the way they really are. The rest of the public is evenly divided over whether the press makes public education seem better (22%) or worse (23%) than it really is.

Although women generally are more likely to follow stories that concern children more closely than are men, there is no difference in their assessments of media coverage of schools. There also is no difference by party, overall, but conservative Republicans and liberal Democrats are notably more likely than others to say the press makes the U.S. education system look better than it is. About three-in-ten of each of these groups (29%) say this, a view shared by about half as many moderate and liberal Republicans and conservative and moderate Democrats. A quarter of independents also express this view.

There also are no substantive differences in partisans’ perceptions of how the media cover the situation in Afghanistan, but men are somewhat more likely than women (24% versus 18%) to say the press makes Afghanistan look worse than it really is.

What the Public is Hearing About 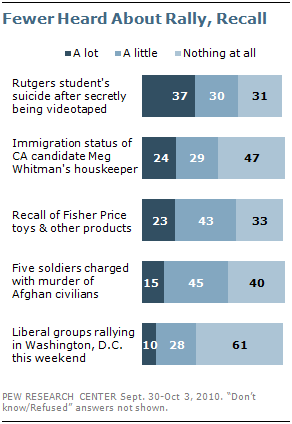 Though Americans focused most closely last week on economic news, 16% say they followed the debate over ways to improve the nation’s public education system more closely than any other top story. About a quarter (26%) say they followed this story very closely. News about the education debate accounted for 6% of the newshole.

More than one-in-ten (12%) say they followed news about the midterm elections most closely. A quarter (25%) say they followed this news very closely, comparable to the levels of interest each week since the start of September. The media devoted 26% of coverage to the elections.

News about al Qaeda’s alleged plans for terror attacks in Europe was the most c
losely followed story for 5%, while the story garnered 2% of coverage. Similarly, 3% say they followed news about peace talks between Israelis and Palestinians most closely; 2% of the news coverage was dedicated to that issue.

These findings are based on the most recent installment of the weekly News Interest Index, an ongoing project of the Pew Research Center for the People & the Press. The index, building on the Center’s longstanding research into public attentiveness to major news stories, examines news interest as it relates to the news media’s coverage. The weekly survey is conducted in conjunction with The Project for Excellence in Journalism’s News Coverage Index, which monitors the news reported by major newspaper, television, radio and online news outlets on an ongoing basis. In the most recent week, data relating to news coverage were collected September 27 –October 3, and survey data measuring public interest in the top news stories of the week were collected September 30-October 3, from a nationally representative sample of 1,002 adults.

Results for this survey are based on telephone interviews conducted under the direction of Princeton Survey Research Associates International among a national sample of 1,002 adults living in the continental United States, 18 years of age or older, from September 30-October 3, 2010 (671 respondents were interviewed on a landline telephone, and 331 were interviewed on a cell phone, including 132 who had no landline telephone). Both the landline and cell phone samples were provided by Survey Sampling International. Interviews were conducted in English.