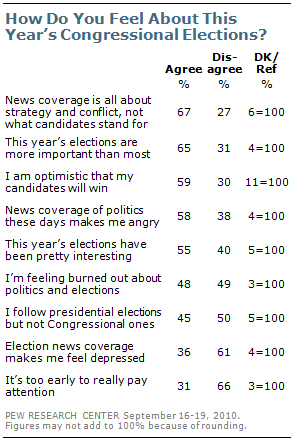 About two-thirds of the public sees coverage of this year’s elections as focused primarily on strategy and conflict rather than candidate positions, while a comparable percentage says the 2010 congressional elections are more important than most.

Nearly six-in-ten (58%) say news coverage of politics makes them angry. Still, few (36%) say election news makes them feel depressed. More than half (55%) say this year’s elections have been “pretty interesting”, according to the latest News Interest Index survey of 1,005 adults conducted Sept. 16-19 by the Pew Research Center for the People & the Press.

Partisan differences in responses to these questions provide further evidence of greater engagement and enthusiasm among Republicans this year. For example, though the public is divided on whether they feel “burned out” about politics and elections (48% agree, 49% disagree), Democrats are much more likely to agree with this statement (54%) than are Republicans (40%).

While election news dominated media coverage last week, the public continued to show relatively modest interest. According to a separate analysis by the Pew Research Center’s Project for Excellence in Journalism, midterm news made up 30% of the newshole. Just more than one-in-ten (11%) 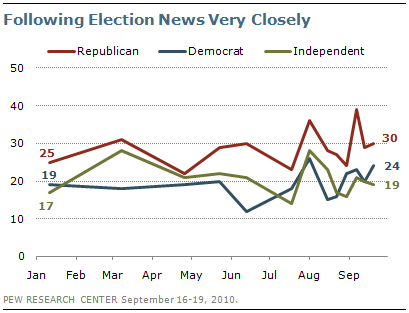 Republicans have recorded generally higher levels of interest than Democrats or independents during a primary season that included a number of intense fights between more mainstream members of their party and those more closely aligned with the Tea Party movement. 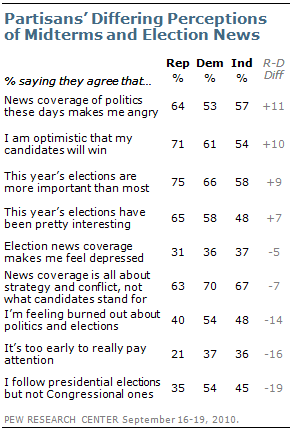 Three-quarters of Republicans say this year’s elections are more important than most, higher than the 66% of Democrats and 58% of independents that concur.

But Republicans are also more likely to agree that news coverage of politics these days makes them angry. Nearly two-thirds of Republicans say this (64%), compared with 53% of Democrats. Nearly six-in-ten independents (57%) agree.

Republicans also are more upbeat about their candidates’ chances in November. About seven-in-ten (71%) say they are optimistic that their candidates will win; 61% of Democrats say this, as do 54% of independents.

There is little difference between partisans in the percentages agreeing with several of the statements. For example, 70% of Democrats say news coverage emphasizes strategy and conflict more than the candidates’ policy positions; 63% of Republicans and 67% of independents agree.

Significant minorities among each group also agree that election news coverage can make them feel depressed; 36% of Democrats say this, as do 37% of independents and 31% of Republicans. 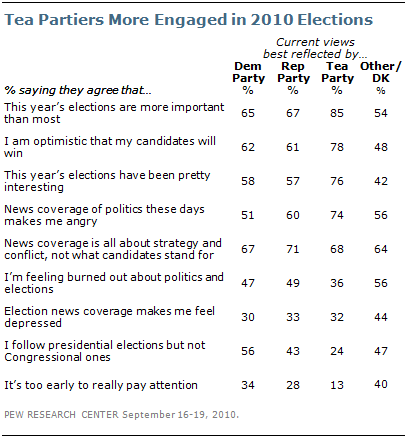 Those who say the Tea Party best reflects their views right now are much more likely than others to see this year’s elections as important and interesting – and to say that news coverage of politics makes them angry. They also are the most optimistic about the prospects for their candidates.

According to findings from this survey released Sept. 20 as part of the weekly Pew Research/National Journal Congressional Connection Poll, about a third of Americans say the Democratic Party (32%) best reflects their views right now; 20% say the Republican Party does, while one-in-seven (15%) say the Tea Party does. (See Americans Even Disagree About Compromising)

Just 13% of those who say the Tea Party best reflects their views say it is too early to pay attention to the elections. About three-in-ten among those more aligned with Republicans (28%) or Democrats (34%) say this. 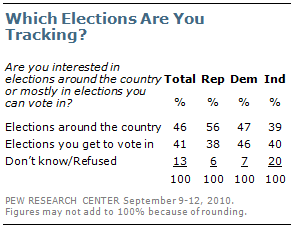 Republicans are more likely than Democrats or independents to say they are watching the election landscape across the country, not just in their home districts. 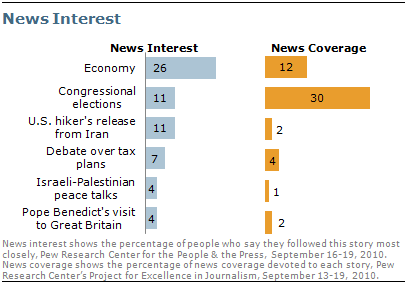 About a quarter (26%) say they followed news about the economy more closely than other major stories. News about the economy accounted for 12% of the newshole measured by PEJ. That does not include 4% of coverage devoted to the debate over whether to extend expiring Bush-era tax cuts. The tax debate was the most closely followed story for 7%; about two-in-ten (21%) say they followed this story very closely.

And 4% say
they most closely followed the visit by Pope Benedict to Great Britain and his comments on the Catholic Church’s sex-abuse scandal; 10% say they followed this news very closely. The pope’s visit accounted for 2% of coverage.

These findings are based on the most recent installment of the weekly News Interest Index, an ongoing project of the Pew Research Center for the People & the Press. The index, building on the Center’s longstanding research into public attentiveness to major news stories, examines news interest as it relates to the news media’s coverage. The weekly survey is conducted in conjunction with The Project for Excellence in Journalism’s News Coverage Index, which monitors the news reported by major newspaper, television, radio and online news outlets on an ongoing basis. In the most recent week, data relating to news coverage were collected September 13-19, and survey data measuring public interest in the top news stories of the week were collected September 16-19, from a nationally representative sample of 1,005 adults.

Results for this survey are based on telephone interviews conducted under the direction of Princeton Survey Research Associates International among a national sample of 1,005 adults living in the continental United States, 18 years of age or older, from September 16-19, 2010 (673 respondents were interviewed on a landline telephone, and 332 were interviewed on a cell phone, including 128 who had no landline telephone). Both the landline and cell phone samples were provided by Survey Sampling International. Interviews were conducted in English.