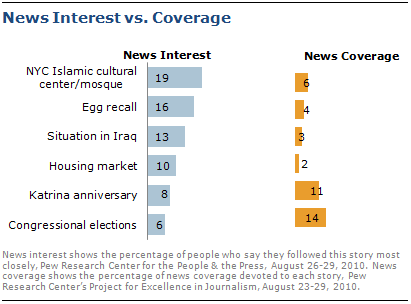 No one story dominated the public’s news interest last week, as several story lines – including the debate over a mosque near Ground Zero in New York and the recall of hundreds of millions of eggs – vied for Americans’ attention.

About two-in-ten (19%) say they followed the debate over plans for an Islamic cultural center and mosque in downtown Manhattan more closely than other major stories. A comparable number (16%) say they followed the recall of more than half a billion eggs after an outbreak of salmonella most closely, according to the latest News Interest Index survey conducted Aug. 26-29 among 1002 adults by the Pew Research Center for the People & the Press.

As summer neared an end, the media also divided its attention among several top stories. The 2010 elections accounted for 14% of the newshole and stories examining New Orleans and the Gulf Coast five years after Hurricane Katrina made up another 11%, according to the Pew Research Center’s Project for Excellence in Journalism (PEJ). The debate over the New York Islamic center accounted for 6% of coverage, while the egg recall made up 4%. 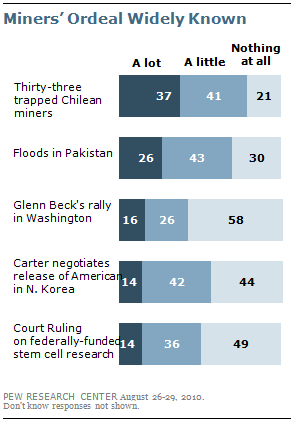 A comparable 14% say they heard a lot about a federal judge’s ruling that blocked expansion of stem cell research using federal funds; 36% heard a little about this, while nearly half (49%) say they heard nothing at all.

Most Say Egg Recall Getting Right Amount of Coverage 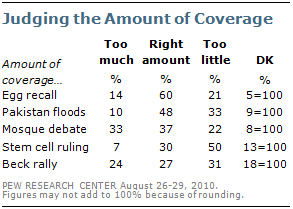 Six-in-ten say news organizations have given the right amount of coverage to the recall of more than half a billion eggs after an outbreak of salmonella. About two-in-ten (21%) say this food safety story has gotten too little coverage, while 14% say it has gotten too much attention.

Opinions are more divided about coverage of the debate over the planned Islamic center and mosque in lower Manhattan. A third of the public says news organizations are giving too much coverage to the debate, while a comparable 37% say the story has received the right amount of coverage. Another 22% say it has received too little coverage. Partisans offer similar answers. For example, 40% of Republicans say the story got the right amount of coverage, compared with 35% of Democrats and 37% of independents. 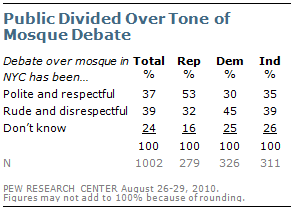 Americans are also divided over the tone of the mosque debate: 37% say the debate has been polite and respectful while a comparable 39% say it has been rude and disrespectful. About a quarter (24%) offer no opinion.

Among those who see the debate as rude and disrespectful, most (59% of that group) say those who oppose building the Islamic center are mostly to blame for this; 25% say those who think the center should be built should bear most of the blame. Another 8% volunteer that both sides share blame for the tone of the debate and an equal 8% say they don’t know.

Last September, more than half (53%) of the public characterized the debate then underway over health care reform as rude and disrespectful; 31% said it was polite and respectful. Among those who said the debate had been rude and disrespectful, most (59% of that group) blamed opponents of the legislation; 17% blamed supporters, 17% volunteered that both sides shared the blame and 7% said they did not know.

The recall of more than half a billion eggs because of an outbreak of salmonella was among the week’s most closely followed stories (16% most closely), while it accounted for 4% of the newshole measured by PEJ. About three-in-ten (31%) say they followed this news very closely. That nearly matches the 33% that said they followed news very closely in early 2009 about the recall of peanut products after another salmonella outbreak.

Nearly three-in-ten (28%) say they very closely followed the debate over plans for an Islamic center in lower Manhattan; 19% say this was the story they followed most closely. The controversy accounted for 6% of coverage, down from 15% one week earlier.

A quarter say they followed news about the situation in Iraq very closely, while 13% say this was the news they followed most closely. Reporting on Iraq made up 3% of coverage.

Nearly two-in-ten (18%) say they followed news about the Katrina anniversary very closely, while 8% say this was the news they followed most closely. Reporting on the five year anniversary made up 11% of coverage.

News about the 2010 elections – including a series of August primaries – made up the single largest share of coverage (14%). Two-in-ten say they followed this news very closely, while 6% say it was the news they followed most closely.

These findings are based on the most recent installment of the weekly News Interest Index, an ongoing project of the Pew Research Center for the People & the Press. The index, building on the Center’s longstanding research into public attentiveness to major news stories, examines news interest as it relates to the news media’s coverage. The weekly survey is conducted in conjunction with The Project for Excellence in Journalism’s News Coverage Index, which monitors the news reported by major newspaper, television, radio and online news outlets on an ongoing basis. In the most recent week, data relating to news coverage were collected August 23-29, and survey data measuring public interest in the top news stories of the week were collected August 26-29, from a nationally representative sample of 1,002 adults.

Results for this survey are based on telephone interviews conducted under the direction of Princeton Survey Research Associates International among a national sample of 1,003 adults living in the continental United States, 18 years of age or older, from August 26-29, 2010 (672 respondents were interviewed on a landline telephone, and 330 were interviewed on a cell phone, including 132 who had no landline telephone). Both the landline and cell phone samples were provided by Survey Sampling International. Interviews were conducted in English.