The public continues to express conflicted views of Islam. Favorable opinions of Islam have declined since 2005, but there has been virtually no change over the past year in the proportion of Americans saying that Islam is more likely than other religions to encourage violence. As was the case a year ago, slightly more people say the Islamic religion does not encourage violence more than other religions (42%) than say that it does (35%).

Amid controversy over the proposed construction of an Islamic cultural center and mosque near the former site of the World Trade Center, more Americans agree with those who object to the building of the center than with the supporters of the project (51% to 34%). At the same time, 62% say that Muslims should have the same rights as other religious groups to build houses of worship in their local communities; just 25% say local communities should be able to block mosques in their area if they do not want them.

As in the past, there are substantial partisan, educational and age differences in opinions about Islam. By more than two-to- 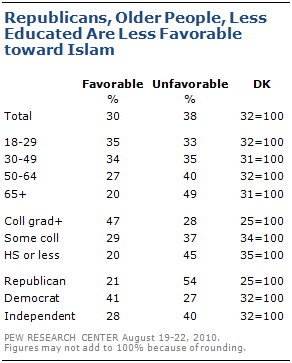 While those who are younger than 50 have mixed views of Islam, the balance of opinion is more negative among those older than 50 (44% unfavorable vs. 24% favorable). By a margin of 47% to 28%, college graduates express favorable opinions of Islam; pluralities of those with less education express unfavorable views.

Views of Islam and Violence 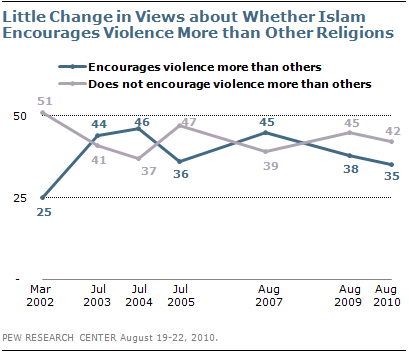 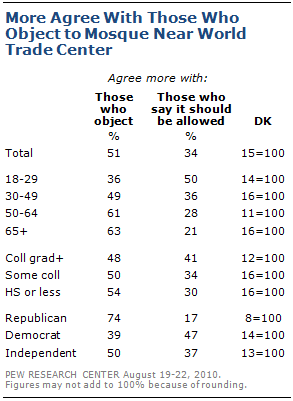 Those 65 and older, as well as those 50 to 64, agree more with the opponents of cultural center and mosque by wide margins. Those younger than 30 agree more with those who say it should be built, by 50% to 36%.

While there is opposition to building the Islamic cultural center and mosque in New York City, most Americans (62%) say Muslims should have the same rights as other religious groups when it comes to building houses of worship in local communities; 25% say that local communities should 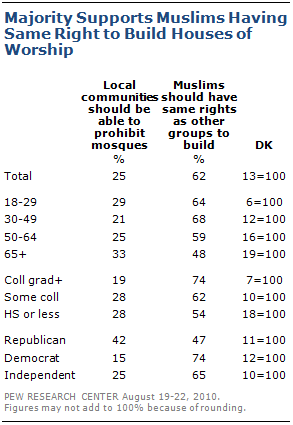 be able to prohibit the construction of mosques in their area if they do not want them.

Majorities of all age groups – except for those 65 and older – think that Muslims should have the same rights as other religious groups to build houses of worship. Fewer than half (48%) of those 65 and older express this view, while 33% say local communities should be able to block the construction of mosques.

Most Know Little about Muslim Religion 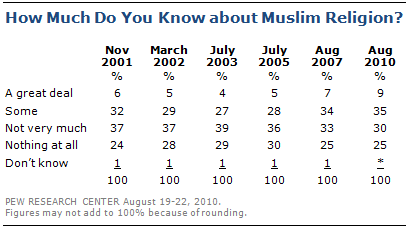 Most college graduates (62%) say they know someone who is Muslim; that compares with 44% of those with some college experience and 26% of those with a high school education or less. As in the past, people younger than 50 (49%) are far more likely to be acquainted with a Muslim than are those 50 and older (31%).

Continuing Divide in Views of Islam and Violence
Views of Muslim-Americans Hold Steady After London Bombings
Growing Concern about Rise of Islamic Extremism at Home and Abroad
Views of Islam Remain Sharply Divided
Most Think the U.S. Has No Responsibility To Act in Iraq