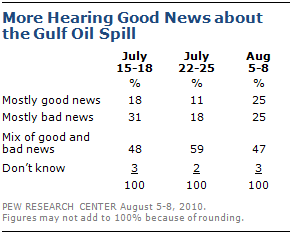 In the days following BP’s latest—and apparently successful—effort to seal the oil well in the Gulf of Mexico, public perceptions of news about the spill have become somewhat more positive. Only a quarter of Americans (25%) say they are hearing mostly good news about the oil spill, but that is more than double the percentage expressing this view two weeks ago (11%).

The Gulf coast oil leak continues to be the public’s most closely followed story, but interest has declined from 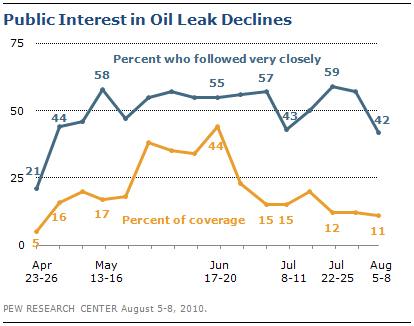 last week. About four-in-ten (42%) say they followed the story very closely, down from 57% a week ago.

Nevertheless, the Gulf oil leak was once again the public’s top news story: 42% say it is the story they followed most closely this week; news about the economy was a distant second, cited by just 16%.

News coverage about the leak also has dropped off in recent weeks. The leak accounted for 11% of this week’s newshole according to a separate analysis by the Pew Research Center’s Project for Excellence in Journalism (PEJ). By comparison, the story dominated news coverage throughout June—constituting 44% of the newshole at its peak, the week ending June 20th. 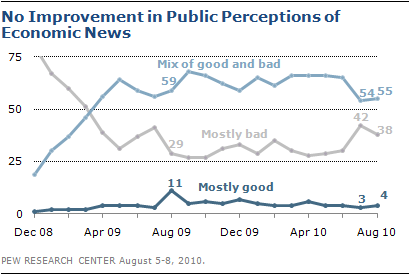 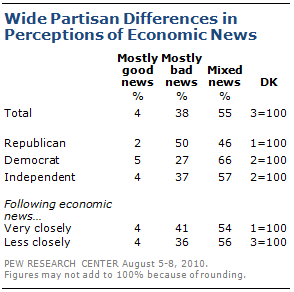 were hearing mostly bad news and 65% said the news was a mix of good and bad.

As has been the case throughout the year, Republican perceptions of economic news are more negative than Democratic perceptions. Half of Republicans (50%) say they are hearing mostly negative news. Just 27% of Democrats and 37% of independents say this.

Although the level of public interest in the oil leak is lower than it was earlier in the summer, the story continues to top the list of stories the public is following. Similarly, although the news media is no longer devoting as much coverage to the leak as in the past, it remains one of the top two stories covered by the press. 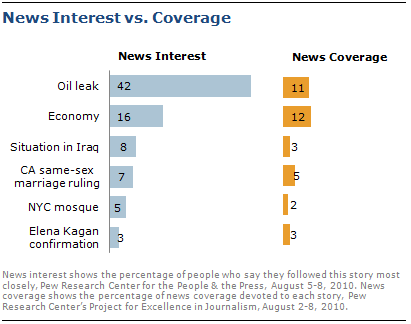 News about the economy rivaled the oil leak in the amount of coverage this week, accounting for 12% of the newshole, and public interest in economic news remains high. Nearly four-in-ten (39%) say they are following economic news very closely; 16% say it is the news they followed most closely.

As the scheduled end of the combat mission in Iraq approaches at the end of this month, about a quarter (23%) say they followed news about the situation in Iraq very closely, while just 8% say this is the story they followed most closely. The public’s attention to news about Iraq has not shifted much over the last year. According to PEJ, Iraq filled just 3% of this week’s newshole.

A federal judge’s ruling that California’s ban on same sex-marriage is unconstitutional garnered 5% of news coverage this week, with 21% of the public reporting that they are following this story very closely and 7% naming it their top story. Both Republicans (27%) and Democrats (25%) were more likely than independents (17%) to say they followed news about the Proposition 8 ruling very closely.

These findings are based on the most recent installment of the weekly News Interest Index, an ongoing project of the Pew Research Center for the People & the Press. The index, building on the Center’s longstanding research into public attentiveness to major news stories, examines news interest as it relates to the news media’s coverage. The weekly survey is conducted in conjunction with The Project for Excellence in Journalism’s News Coverage Index, which monitors the news reported by major newspaper, television, radio and online news outlets on an ongoing basis. In the most recent week, data relating to news coverage were collected August 2-8, and survey data measuring public interest in the top news stories of the week were collected August 5-8, from a nationally representative sample of 1,002 adults.

Results for this survey are based on telephone interviews conducted under the direction of Princeton Survey Research Associates International among a national sample of 1,002 adults living in the continental United States, 18 years of age or older, from August 5-8, 2010 (671 respondents were interviewed on a landline telephone, and 331 were interviewed on a cell phone, including 131 who had no landline telephone). Both the landline and cell phone samples were provided by Survey Sampling International. Interviews were conducted in English.