While most Americans disapprove of Barack Obama’s handling of the economy, far more think his administration’s policies – rather than those of the Bush administration – would do more to improve economic conditions over the next few years. As Congress gears up for debate over the tax cuts passed when Bush was president, the public is divided, with roughly equal numbers in favor of keeping all of Bush’s tax cuts, repealing only those for wealthy Americans, or scrapping them entirely. 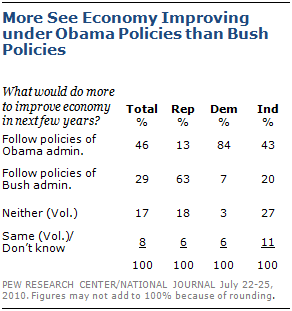 While Obama’s policies generally are viewed more positively than are Bush’s, whites and older Americans are divided on this issue. About as many non-Hispanic whites say following the Bush administration’s economic policies (38%) as Obama’s policies (34%) would improve the economy in coming years; this also is the case among those 65 and older (38% Bush’s policies, 40% Obama’s policies). 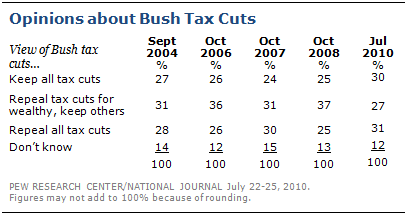 This represents a modest change from mid-October 2008, when a plurality (37%) favored a repeal of tax cuts for the wealthy, while keeping other tax cuts in place. At that 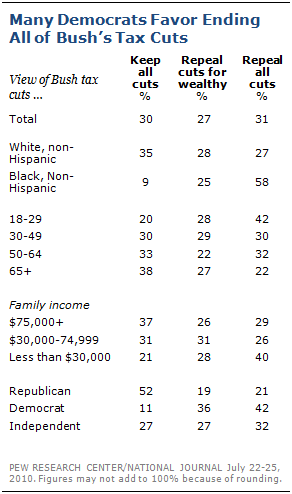 time, 25% supported
keeping all of Bush’s tax cuts while the same percentage favored eliminating all of the tax cuts.

There also are race, age and income differences in opinions on what to do about Bush’s tax cuts. More than twice as many non-Hispanic African Americans (58%) as non-Hispanic whites (27%) favor repealing all of the tax cuts passed during Bush’s presidency.

LOW RATINGS FOR CONGRESSIONAL LEADERS, POOR MARKS FOR BOTH PARTIES 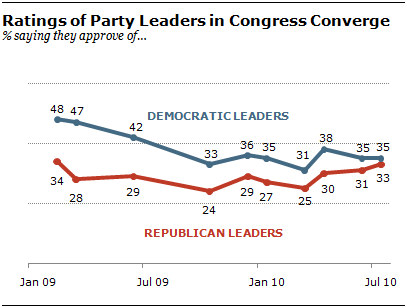 Congressional leaders on both sides of the aisle continue to receive negative assessments from the public. Today, just a third (33%) approves of the Republican congressional leadership; about the same number (35%) approves of the Democratic leadership. While these evaluations have changed little in recent months, approval ratings for Democratic leaders are now far lower than they were in early 2009. Ratings for Republican leaders have shown less change over this period. 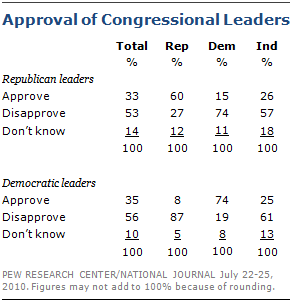 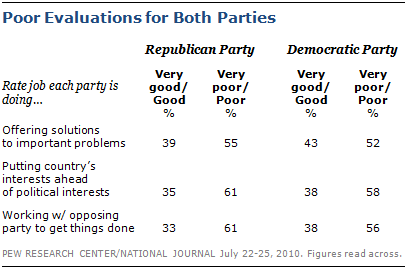 The public also has negative impressions of how the two major parties are doing on several specific dimensions. Majorities say both the Democratic Party and Republican Party have done poor or very poor jobs of offering solutions to the important problems facing the nation, putting the country’s interests ahead of their own political interests and working with members of the other party in Washington to get things done.

Although these evaluations are low for both Republicans and Democrats, the GOP has made small gains on all three dimensions since 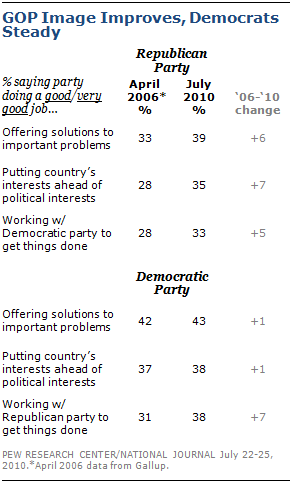 April 2006. The public is now more likely to say the Republican party is offering solutions (up six points), putting the country’s interests ahead of its political interests (up seven points) and working with Democrats to get things done (up five points). Democratic ratings have remained relatively unchanged, although more now say the Democratic Party is working with Republicans to get things done (38% today, compared to 31% in 2006).

Fully 79% of Democrats say their party has done a good or very good job of offering solutions to the nation’s important problems; just 19% say they have done poor or very poor in this regard. Republican are somewhat less positive about their party’s performance in offering solutions to problems. About six-in-ten (63%) give their party positive ratings, compared with 32% who view their job negatively. Similar patterns are evident in assessments of whether the parties prioritize the nation’s interests over political interests and whether the parties are working together. Independents give both parties similar marks on each of these dimensions.

Bush’s Base Backs Him to the Hilt
An Even More Partisan Agenda for 2008
Plurality Now Sees Bush Presidency as Unsuccessful
Obama Faces Familiar Divisions Over Anti-Terror Policies
Views of Job Situation Improve Sharply, but Many Still Say They’re Falling Behind Financially