Amid reports that BP has been able to at least temporarily stem the flow of oil from its ruptured underwater well, the public and the media last week again focused on the disaster in the Gulf of Mexico. 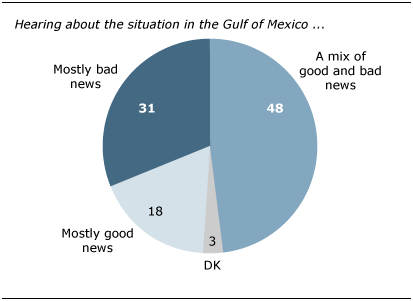 More than half of the public (55%) say this was the news they followed most closely last week. The Gulf coast spill now has been the most closely followed story for each of the past 12 weeks.

News about the spill again received more coverage than any other major story, accounting for 20% of the newshole. That is up from 15% one week earlier, but still below peak levels reached in May and June, when it accounted for one-third or more of coverage, according to the Pew Research Center’s Project for Excellence in Journalism (PEJ). 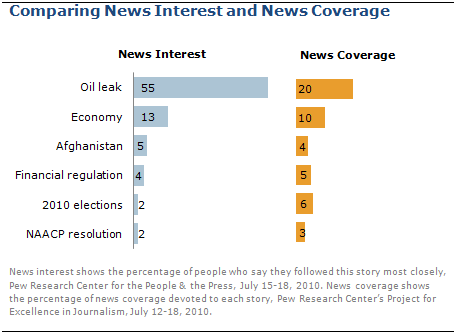 On another subject, 40% say that – taking into account what they have read and heard so far about this year’s congressional elections – they think Republicans are more likely to gain a majority of seats in the House of Representatives than Democrats are to hold on to their majority (33% say this is more likely). More than a quarter (27%) say they do not know.

Democrats and Republicans offer widely different assessments, each favoring their own party. Among independents, 44% say they think a Republican takeover is more likely than Democrats holding on to their majority (25%). Partisan differences also are sharp when people are asked whether recent news coverage of certain political and party leaders – including Barack Obama and Sarah Palin – has been too tough, too easy or fair.

After several months of news about failed efforts to stop the flow of oil into the Gulf of Mexico, BP appeared to make progress last week, installing a cap on the broken well on the ocean floor. 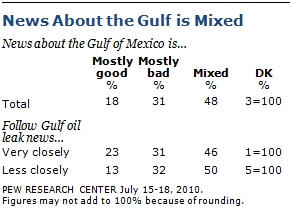 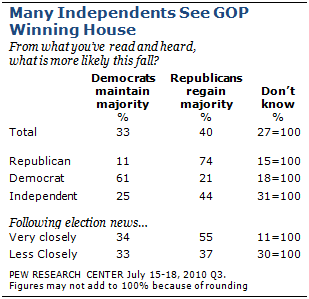 Four-in-ten Americans say that from what they have read and heard about the upcoming congressional elections, they think it is more likely that the GOP will regain a majority of seats in the House than the Democrats will maintain their majority (33%). More than a quarter (27%) do not know.

The divide is wider among those following this news closely. Last week, the media devoted 6% of the coverage to the 2010 congressional elections, ranking that story just behind the oil spill and the economy. But fewer than two-in-ten (17%) say they followed these stories very closely and just 2% say they followed election news more closely than any other story.

On balance, more Americans think news coverage of Barack Obama has been fair (39%) than too easy (27%) or too tough (24%). Those numbers are little changed since April. There continues to be wide partisan 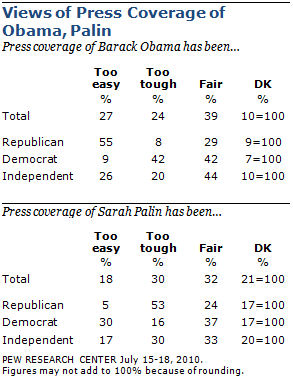 Views of Coverage of Congressional Leaders, the Tea Party

The public tends to see coverage of both Democratic and Republican leaders in Congress as fair, while many do not offer an opinion on press coverage of the Tea Party movement. 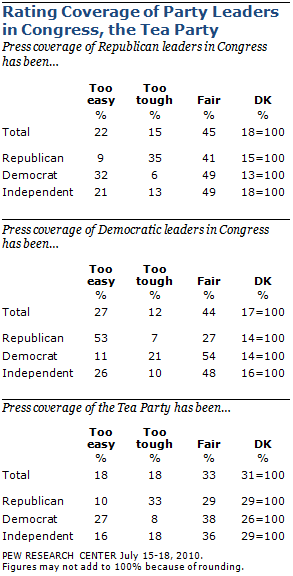 A majority of Democrats sees coverage of their party’s leaders as fair (54%), while 21% say it has been too tough and 11% say too easy.

Many do not offer opinions about coverage of the Tea Party movement. Overall, 33% say coverage has been fair, 18% say too easy and 18% say too tough. About three-in-ten (31%) say they do not know. 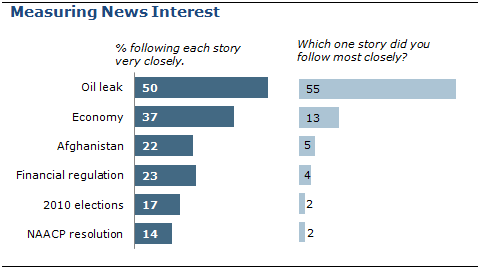 These findings are based on the most recent installment of the weekly News Interest Index, an ongoing project of the Pew Research Center for the People & the Press. The index, building on the Center’s longstanding research into public attentiveness to major news stories, examines news interest as it relates to the news media’s coverage. The weekly survey is conducted in conjunction with The Project for Excellence in Journalism’s News Coverage Index, which monitors the news reported by major newspaper, television, radio and online news outlets on an ongoing basis. In the most recent week, data relating to news coverage were collected July 12-18, and survey data measuring public interest in the top news stories of the week were collected July 15-18, from a nationally representative sample of 1,003 adults.

Results for this survey are based on telephone interviews conducted under the direction of Princeton Survey Research Associates International among a national sample of 1,003 adults living in the continental United States, 18 years of age or older, from July 15-18, 2010 (672 respondents were interviewed on a landline telephone, and 331 were interviewed on a cell phone, including 122 who had no landline telephone). Both the landline and cell phone samples were provided by Survey Sampling International. Interviews were conducted in English.