The public sees clear winners and losers from the economic policies the government has implemented since the recession of 2008. Most Americans say these policies have helped large banks, large corporations and the wealthy, while providing little or no help for the poor, the middle class or small businesses. 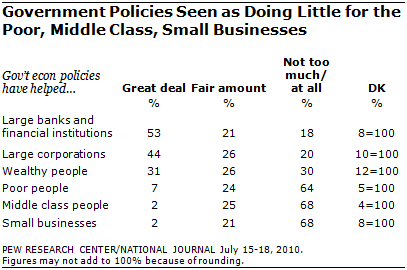 By contrast, 68% say government policies have helped small businesses not at all (29%) or not too much (39%); 68% also say middle-class people have received little or no help from these policies. And about the same percentage (64%) says poor people have not been helped. 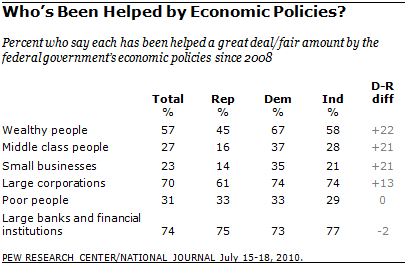 The latest Pew Research/National Journal Congressional Connection Poll, sponsored by SHRM, conducted July 15-18 among 1,003 adults, finds partisan differences over the perceived beneficiaries of government economic policies – with two notable exceptions. Large majorities of independents (77%), Republicans (75%) and Democrats (73%) say these policies have helped large banks and financial institutions. No more than a third in each group says government policies have done a great deal or a fair amount for the poor.

Poor Say Policies Have Helped Wealthy, Not Them

Across income groups, more say that wealthy people have been helped by the economic policies of the last few years than say middle class or poor Americans have been aided by these policies, but this difference is most pronounced among the poor themselves. About two-thirds of those with annual family incomes of less than $30,000 (68%) say that the wealthy have benefited a great deal or a fair amount from recent economic policies; that compares with 58% of those with incomes of $30,000-74,999 and 50% of those with incomes of $75,000 or more.

At the same time, lower income people are also the least likely to say poor people have been helped by economic policies during the recession. Just 21% of those with incomes of less than $30,000 say this, compared to 37% of those with higher annual incomes. 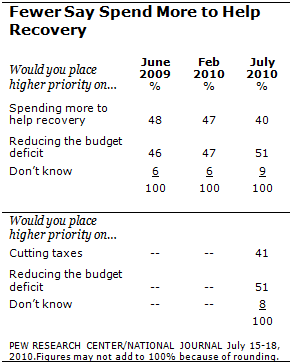 The latest Pew Research/National Journal Congressional Connection Poll, sponsored by SHRM, conducted July 15-18 among 1,003 adults, finds independents leading the way in changing priorities for government economic policies. Currently, 53% of independents see reducing the deficit as a higher priority while 38% say spending more to boost the economy. In February, these figures were almost reversed: 51% said the higher priority for government was to spend more to help the economy recover while 42% said it was more important to reduce the budget deficit. 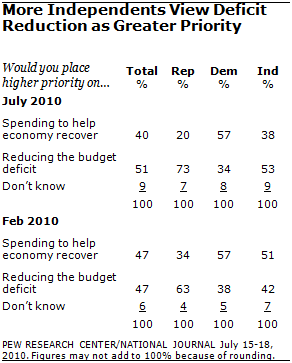 Republicans also have become more supportive of reducing the budget deficit since February; 73% now say that should be the higher priority, up from 63% five months ago. Opinions among Democrats are virtually unchanged – 57% now say the government should spend more to help the economy recover while 34% say the higher priority is reducing the deficit.

No Consensus on How to Boost Economy 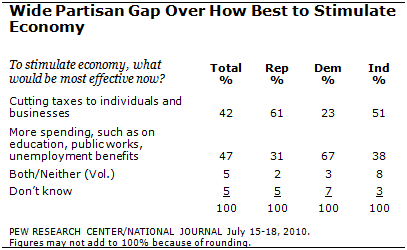 MOST SAY STIMULUS HAS INCREASED DEFICIT, FEW SEE ITS BENEFITS 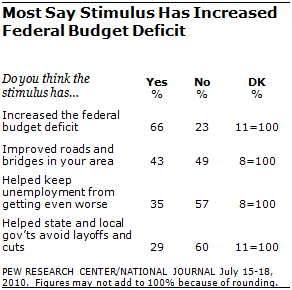 Looking back at last year’s economic stimulus program, a large majority of Americans say it has increased the federal budget deficit. Far fewer say it has prevented steeper job losses or led to improvements in roads and other infrastructure in their area.

The latest Pew Research/National Journal Congressional Connection Poll, sponsored by SHRM, conducted July 15-18 among 1,003 adults, finds that fully 66% say the economic stimulus has increased the federal budget deficit. By comparison, 43% say it has led to improvements in roads, bridges and other infrastructure in their area. Only about third (35%) say it helped keep unemployment from getting even worse while just 29% say it helped state and local governments avoid layoffs and budget cuts. 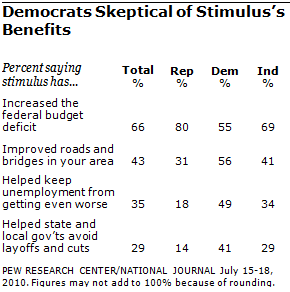 Republicans take highly negative views of the impact of the stimulus. Eight-in-ten (80%) say it has increased the budget deficit; 31% say it has improved infrastructure in their area, while even fewer say it helped prevent higher unemployment (18%) and state and local budget cuts (14%).

But many independents and Democrats also are skeptical of the benefits of the stimulus. And majorities of both groups say it has increased the federal budget deficit (69% of independents, 55% of Democrats).

Democrats express positive views of the impact of the stimulus on roads and infrastructure in their area (56% helped), while 49% say it has kept unemployment from getting even worse and 41% say it helped state and local governments avoid layoffs and budget cuts. Fewer than half of independents see the stimulus helping infrastructure in their area (41%), unemployment (34%) and state and local governments (29%).

Gov’t Economic Policies Seen as Boon for Banks and Big Business, Not Middle Class or Poor
OverviewPoor Say Policies Have Helped Wealthy, Not ThemDEFICIT REDUCTION NOW SEEN AS HIGHER PRIORITY THAN SPENDING TO BOOST RECOVERYNo Consensus on How to Boost EconomyMOST SAY STIMULUS HAS INCREASED DEFICIT, FEW SEE ITS BENEFITS
About the Survey