Eight years after the Great Recession sent the U.S. newspaper industry into a tailspin, the pressures facing America’s newsrooms have intensified to nothing less than a reorganization of the industry itself, one that impacts the experiences of even those news consumers unaware of the tectonic shifts taking place.

In 2015, the newspaper sector had perhaps the worst year since the recession and its immediate aftermath. Average weekday newspaper circulation, print and digital combined, fell another 7% in 2015, the greatest decline since 2010. While digital circulation crept up slightly (2% for weekday), it accounts for only 22% of total circulation. And any digital subscription gains or traffic increases have still not translated into game-changing revenue solutions. In 2015, total advertising revenue among publicly traded companies declined nearly 8%, including losses not just in print, but digital as well. 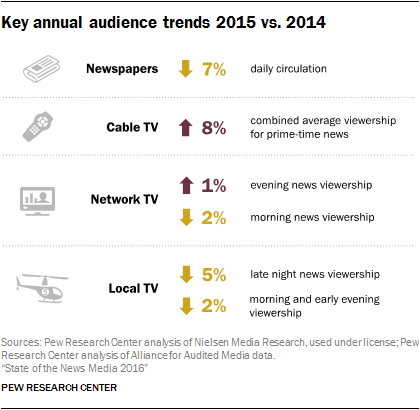 The industry supports nearly 33,000 full-time newsroom employees. Indeed, newspapers employ 32% of daily reporters stationed in Washington, D.C. to cover issues and events tied to Congress, as well as 38% of the reporters who cover statehouse legislatures. Still, smaller budgets have continued to lead to smaller newsrooms: The latest newspaper newsroom employment figures (from 2014) show 10% declines, greater than in any year since 2009, leaving a workforce that is 20,000 positions smaller than 20 years prior. And the cuts keep coming: Already in 2016, at least 400 cuts, buyouts or layoffs have been announced. Ownership trends show further signs of devaluation as three newspaper companies – E.W. Scripps, Journal Communications and Gannett – are now one. And the recently renamed Tribune Publishing Co. spent much of the spring of 2016 fending off an attempt by Gannett to purchase them as well.

Print newspapers, to be sure, have a core audience and subscriber base that the industry hopes will buy enough time to help ease the digital transition. But recent data suggests the hourglass may be nearing empty: A January 2016 Pew Research Center survey found that just 5% of U.S. adults who had learned about the presidential election in the past week named print newspapers as their “most helpful” source – trailing nearly every other category by wide margins, including cable, local and national TV, radio, social media and news websites. (About one-third got at least some election news from a print paper, which again trailed nearly every other category.) 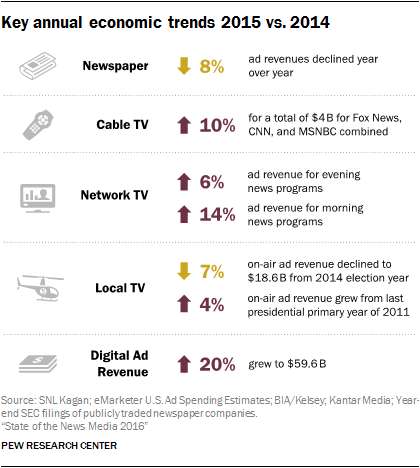 The three television-based news sectors face serious challenges but have benefitted from the fact that despite all the growth in digital, including a surge in digital video developments over the last year, large swaths of the public – and thus advertisers – remain drawn to that square box in the middle of the room. Cable and network TV both saw revenue growth in 2015. Network TV grew ad revenues by 6% in the evening and 14% in the morning. Cable increased both ad revenue and subscriber revenue for a total growth of 10% and saw profit gains as well. Local ad revenue, which follows a cyclical pattern tied to election-year ad spending, was down compared with the election year of 2014 but on par with the last non-election year of 2013 and higher than the last presidential primary year (2011). Additionally, retransmission revenue is expected to reach $6.3 billion in 2015, five times that of 2010.

Despite current financial strength, though, TV-based news can’t ignore the public’s pull toward digital. The contentious presidential primary helped spur cable prime time viewership 8% above 2014 levels, but those audience gains followed a year of declines across the board in 2014. And, while network TV newscasts had a mixed year – morning news audience declined while evening remained about steady – local TV news lost audience in every major timeslot. More broadly, a 2015 Pew Research Center survey suggests that as many as one-in-seven Americans have turned away from cable or satellite TV subscriptions. This “cord cutting” has implications not just for cable but for any network or station that benefits from the pay TV system. This coincides with a growing digital video ad market, which has attracted the interest of publishers. The Center’s survey data reveal that dramatic generational differences already exist, with those under 30 much less likely than those 30+ to watch any of the three programming streams. Instead, younger adults are more likely to name social media as a main source of news. Even beyond the young, fully 62% of U.S. adults overall now get news on social media sites – many of which took steps over the last year to enhance their streaming video capabilities.

With audience challenges already in view and few immediate financial incentives to innovate, the dilemma facing the TV news business bears an eerie resemblance to the one faced by the newspaper industry a decade ago, except for the fact that the digital realm is much more developed and defined today.

It has been evident for several years that the financial realities of the web are not friendly to news entities, whether legacy or digital only. There is money being made on the web, just not by news organizations. Total digital ad spending grew another 20% in 2015 to about $60 billion, a higher growth rate than in 2013 and 2014. But journalism organizations have not been the primary beneficiaries. In fact, compared with a year ago, even more of the digital ad revenue pie – 65% – is swallowed up by just five tech companies. None of these are journalism organizations, though several – including Facebook, Google, Yahoo and Twitter – integrate news into their offerings. And while much of this concentration began when ad spending was mainly occurring on desktops platforms, it quickly took root in the rapidly growing mobile realm as well.

Increasingly, the data suggest that the impact these technology companies are having on the business of journalism goes far beyond the financial side, to the very core elements of the news industry itself. In the predigital era, journalism organizations largely controlled the news products and services from beginning to end, including original reporting; writing and production; packaging and delivery; audience experience; and editorial selection. Over time, technology companies like Facebook and Apple have become an integral, if not dominant player in most of these arenas, supplanting the choices and aims of news outlets with their own choices and goals.

The ties that now bind these tech companies to publishers began in many ways as lifelines for news organizations struggling to find their way in a new world. First tech companies created new pathways for distribution, in the form of search engines and email. The next industry overlap involved the financial model, with the creation of ad networks and app stores, followed by developments that impact audience engagement (Instant Articles, Apple News and Google’s AMP). Now, the recent accusations regarding Facebook editors’ possible involvement in “trending topics” selections have shined a spotlight on technology companies’ integral role in the editorial process. The accusations, whether true or not, highlighted the human element involved in any machine learning tool, not only Facebook’s. The messaging app Snapchat reports having about 75 editorial-level staff members and announced in mid-May that they will begin using an algorithm for news story selections.

Original reporting and writing are the two industry roles largely left to news organizations (though there are a handful that are using machines to produce news). None of the others carry much worth without these two key elements – so these roles are in some ways critical to tech companies. But it is also true – and some nonprofits have found this in their struggle to get audiences – that well-reported news stories are also not worth much without the power of strong distribution and curation channels. What is less clear is how the tug and pull between tech and journalism companies will evolve to support each other as necessary parts of the whole, and what this rebuilt industry will ultimately mean for the public’s ability to stay informed.

These are some of the findings of Pew Research Center’s 2016 State of the News Media report, now in its 13th year. This is the Center’s annual analysis of the state of the organizations that produce the news and make news available to the public day in and day out. Understanding the industry in turn allows researchers to ask and answer important questions about the relationship between information and democracy. Within this report we provide data on 13 separate segments of the news industry, each with its own data-filled fact sheet. Each individual fact sheet contains embeddable graphics that also link to a full database of roughly 80 charts and tables that pull from roughly 20 different sources. This overview highlights and weaves together audience, economic, newsroom investment and ownership trends across the industry.

Other news sectors than those talked about above had mixed years. In ethnic media, Hispanic print weeklies saw some circulation growth, but the major Hispanic dailies all declined and the largest TV network’s news programs lost both audience and revenue. The number of black newspapers remained at roughly 200, though there is evidence of further audience decline. In the digital space, The Root – a leading black-oriented news site – was acquired by Univision Communications in a bid to expand its audience. NPR erased its years-long operating deficit and expanded its digital offerings, including three new podcasts in 2015. The 14 news magazines studied here varied dramatically in their print and digital audience figures, though digital figures are harder than ever to gauge with the greater use of platforms such as Texture, which provide consumers with bundled access to multiple magazines. There is no audited, sector-wide audience or financial data for digital-native news outlets such as the Huffington Post and Vox, but what the Center is able to collect suggests growth in total audience and time spent on these websites. Beyond their home pages, these sites are also pouring efforts into social media, mobile apps and even giving a resurgence to email newsletters. Podcast programming and listenership grew again in 2015, though podcasts overall (beyond just news) still reach a minority of Americans (36%) and bring in a fraction of revenue compared with other news genres.

There were also, in the past year, some exciting developments and experiments in the original reporting and storytelling in the digital realm by those producing original reporting. Several news outlets including The New York Times and The Des Moines Register are experimenting with virtual reality journalism that can let consumers “experience” the news themselves; others like the Washington Post and Quartz have built “chatbots,” which (like Apple’s Siri or Microsoft’s Cortana) provide personalized, interactive headlines through texts or mobile messaging services like Facebook Messenger; ProPublica has delved into the big data space, including a deep examination of how criminal profile algorithms are biased; and Univision Digital launched Univision Beta, in collaboration with MIT – experimenting with new ways to tell stories, especially on social and messaging platforms such as their new hub for their online election reporting, Destino 2016.

But even for these, the lines of dependencies with technology companies are deep. As these lines continue to solidify it will be important to keep in mind that the result is about far more than who captures the upper hand or the revenue base. It is determining how and with what kinds of storytelling Americans learn about the issues and events facing society and the world.

Next: Newspapers: Fact Sheet
← Prev Page
You are reading page1Page2Page3Page4Page5Page6Page7Page8Page9Page10
Next Page →