Whether in a tech-savvy metropolis or a city where the town square is still the communication hub, local news matters deeply to the lives of residents. Across three disparate metro areas in the U.S., nearly nine-in-ten residents follow local news closely—and about half do so very closely, according to a new, in-depth Pew Research Center study, conducted in association with the John S. and James L. Knight Foundation. About two-thirds of the residents in each city discuss local news in person a few times a week or more.

During a period of tremendous technological change—change that is far from complete—this study takes a microscope to the information streams in three news environments across the United States: Denver, Colorado—a highly educated urban area of more than 2 million with internet adoption above the national average and a large Hispanic population (19%); Macon, Georgia—a metro area of 175,000 with a substantial share of black residents (41%), an unemployment rate above the national average, and a local university working to serve as a hub for journalism innovation; and Sioux City, Iowa—a city that spans three states and has a predominantly white population of just 125,000. These cities are not meant to be extrapolated to the United States as a whole, but rather serve as a set of case studies on the ebb and flow of daily local news that speak to the diversity of modern American cities.

Studying the ways that local news flows in a city’s population requires more than one tool in the social scientist’s tool kit. For this particular project, the Center employed multiple types of quantitative research in each metro area, including a landscape audit cataloging the full range of news providers operating in the area; a content analysis of the actual news output produced over a week’s time; a public opinion survey of residents focusing on their local news habits and civic engagement; and an experimental examination of Facebook and Twitter posts in each area.

Perhaps the most obvious way that local news climates differ across U.S. cities is in terms of volume and choice, the former of which may well have an impact on the latter. Denver’s 140+ identified news providers—including 25 digital-only outlets—is about 2.5 times that of Macon (24) and Sioux City (31) combined. And that seems to have some impact on the dominance of legacy providers in each city. In choice-rich Denver, somewhat fewer residents often rely on local TV for news (58%, compared with 66% in Macon and 68% in Sioux City), though local TV still attracts a greater share of the audience than any other type of news source. 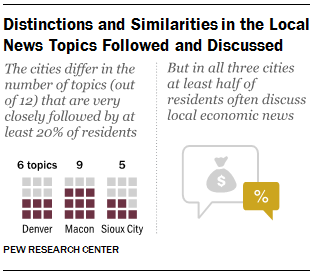 More striking, only a quarter (23%) of Denver residents often get local news from their main daily paper, compared with 40% of Sioux City residents and 36% of Macon residents. This is evidenced further in the sources residents say they turn to most for various local news topics. In Sioux City, the newspaper ranks first in six different topics, while in Denver the same is true of just a single topic area–development issues. Nonetheless, the reliance on nontraditional news outlets is still the exception rather than the norm. In all three cities, the portion of residents who often get local news from neighborhood associations, government agencies or officials, or digital-only outlets is in the single digits.

The study also suggests that some populations are more engaged with their local news stream, and that this holds across a broader range of topics. Macon residents, for example, stand out for closely following most topics at higher rates than Denver or Sioux City residents. Nine out of 12 topics covered—from weather to education to the local economy—are closely followed by at least 20% of Macon residents, while that is true of just six topics in Denver and five in Sioux City. This higher rate of interest from Macon residents exists in civic-oriented topics such as education and government as well as local crime. But civic issues resonate everywhere. At least four-in-ten residents in each city say they often discuss local government and politics or the local economy.

Across these three cities, the study picks up traces of the start of direct participation in the news process, and at fairly equal levels. No more than 10% in each city have submitted their own local content to a news provider in the past year; about 10% have called in to a local radio or TV show; roughly two-in-ten have commented on a local news blog. But it is in the small metro area of Sioux City where residents are most likely to have spoken with or been interviewed by a local journalist (29%, compared with 23% in Macon and 16% in Denver).

Digital differences also stand out among the news providers in each city. Only six of the 24 news providers in Macon and seven of the 31 identified in Sioux City offered daily digital content. Among just the digital only outlets in Denver, there were more offering daily content – 11 of the 25. Denver news providers also demonstrate a greater use of digital opportunities. In five days of content studied in each city, 31% of online news stories in Denver (excluding traffic, weather and sports) contained at least one embedded link compared with 3% of online stories in Macon and 1% in Sioux City.

Among the other major findings:

Taken together, the data illustrate that when it comes to news ecologies, the greater digital orientation and array of providers in Denver widen the local news system somewhat with less reliance on the major legacy providers, especially the local newspaper, and a greater mix of coverage more often driven by enterprising work from journalists. The portion of the population finding that enterprising work, though, remains small. Overall interest in local news, meanwhile, is highest in the city with the most limited number of offerings and the lowest level of education and household income. And the greatest level of satisfaction with the role of the news media is expressed in the city with the least diverse population and the greatest connection to those local journalists. Again, these three cities are not meant to be extrapolated to the nation as whole, but they do indicate the degree to which local factors—from digital infrastructure to economics to civic engagement to race, ethnicity and education—contribute to the mix of providers that emerge, the public that supports them and the ways they interact.

The full study consisted of six separate analyses, each with its own methodology.

In an Audit of the News Landscapes, researchers took several steps to identify the broadest possible universe of local news providers in each of the three cities—including mainstream legacy media, neighborhood and community newspapers, ethnic and alternative media outlets, civic organizations, nonprofits and municipal institutions. Analysts consulted existing lists and databases of news outlets, conducted multipronged web searches with standardized search terms, and contacted experts familiar with the metro areas. Outlets that were primarily listings of entertainment events or sports scores, public relations vehicles, advocacy organizations, local businesses or news aggregators were excluded from the audit. A total of 198 news providers were identified. Of those, 170 were included in a website audit to identify key digital features such as frequency of updates or volume of original content on the home page. The majority of audits were conducted in July of 2014, with follow-up audits conducted in September and December 2014-February 2015.

The Survey of City Residents, conducted between July 8 and August 18, 2014, used an address-based sampling method. Residents in each of the three cities were mailed paper and pencil questionnaires asking primarily about their attitudes of and consumption of local news in their city. A total of 1,043 Denver residents, 1,387 Macon residents and 1,191 Sioux City residents, all adults, completed and mailed back the survey.

The Analysis of News Content collected and analyzed news coverage from each city over a five-day period, Monday through Friday. The specific dates for each city were Macon, June 9-13; Denver, June 16-20; and Sioux City, June 23-27. All providers identified as producing at least weekly content were analyzed. That amounted to a total of 81 providers: 52 from Denver, 17 from Sioux City and 12 from Macon. In all, 6,416 stories were captured and coded.

The City Selection—This report analyzed the local news environment in three cities: Denver, Colorado; Macon, Georgia; and Sioux City, Iowa. The cities were selected from 210 DMA (designated market area) as defined by Nielsen, with an aim of studying one from each third of the list according to size (rankings 1-70, 71-140 and 141-210).1 Denver falls in the top third (ranked 17th), Macon is in the middle third (120th) and Sioux City is part of smallest third of markets (147th) on the 2013 Nielsen DMA list. In settling on these three cities, researchers examined a wide range of variables including population size, demographics, broadband penetration (by county), the presence of news providers and geography. As noted, these cities are not meant to be representative of the United States as a whole, but rather serve as detailed case studies of local news in three specific, unique areas in the U.S.

Next: The News Environment in Denver, Colorado
← Prev Page
You are reading page1Page2Page3Page4Page5Page6Page7Page8Page9Page10
Next Page →