New developments from internet giant Google ignited the blogosphere last week, making the company the No. 1 topic for the week of April 16-20, 2012, according to the New Media Index from the Pew Research Center’s Project for Excellence in Journalism.

The New Media Index has repeatedly found that bloggers tend to be excited by tech news, much of which is generated by the industry leaders. And last week marks the seventh time in 16 weeks this year that Google has registered among the top five stories for bloggers.

The upcoming release of Google Drive, a cloud drive like the popular Dropbox, became the primary focus of conversation last week. Google Drive will provide users of Mac, Windows, Android and iOS with 5GB of space for free. Bloggers also responded to design changes coming to Google+.

Most of the comments about Google Drive greeted that news warmly, although some bloggers cautioned about overly high expectations. A smaller number of bloggers wrote about Google+ and many of those were pleased with the expected changes.

Most of the top stories on blogs last week were technology-related including: the upcoming release of a new Samsung Galaxy cell phone; a website for Harry Potter fans; a controversial comment about the photo app Instagram; and an IPO (initial public offering) date for Facebook.

While the majority of blog posts about Google simply relayed the news that the new Google Drive would be released sometime in the next week, many bloggers couldn’t contain their excitement over another product integrated into their Google-dominated world. 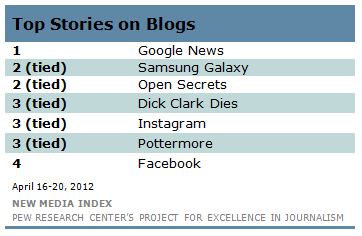 “It’s exciting to think of the possibilities that Google can offer with Google Drive – Gmail and Google Docs integration, or even integration with YouTube or Google+ so that media content stored in Google Drive could be available to publish immediatedly,” wrote Darren McCarra at the Sociable.*

“This new release of this Google Drive will obviously be a great news for many iOs, Android, Mac and PC users out there,” wrote Tim M. at NextPhones4U.*

“I’ve been a long time Dropbox user, but may replace it with Google Drive as my virtual storage of choice depending on its implementation,” wrote George Heymann at Technology-Headlines.

A few bloggers were a bit more skeptical about the not-yet-released Google Drive.

“Google Drive also has its downside. As of now the only systems supported by Google Drive are Windows, Mac OS X, iOS & Android. There is no linux support currently available for Google Drive, whereas Dropbox seamlessly supports all flavours of Linux,” wrote Debjit on digitizor.

“Then again, Google is no stranger to shoving their heft where it arguably doesn’t need to be – just look at Google+. Considering how long Google Drive has been gestating deep in the dark womb that is Mountain View, I expect Google to take every possible opportunity to push their new storage offerings in our faces. But hey, if it works as we all hope it will, that may not be such a bad thing,” wrote Aniket Sharma at NewMobileArrivals.

And some bloggers cautioned against too much speculation about Google Drive.

“But then again, rumours have claimed this before and have been wrong. So, we’ll wait and see,” wrote Terence Hyunh at TechGeek Australia.

Google+ users also got good news last week. The social network, which has 170 million users, is not as widely used as Facebook and the company announced it was revamping the site to make it more aesthetically pleasing, providing a new place for “hangouts” and updating the profile page.

“[W]e think that the new Google+ interface is a great improvement,” wrote Jacqui Keep on Powwownow, “However, it will be interesting to see whether the redesign will encourage an increased up-take of Google+!”

“Because the layout is essentially the same as that of Facebook, users will feel more comfortable and at ease, and the rearrangable icons definitely make for a smoother experience, but that, in turn, brings up the question of differentiation,” wrote Matt Smith at insightpool (author’s emphasis).

The upcoming release of the new model of the Samsung Galaxy S was the No. 2 story was on blogs last week.

Most tech bloggers repeated the rumors that the phone would have multiple models and would be the official device of the 2012 Olympic Games. Still, many warned their readers to be wary of any unconfirmed buzz over the phones.

“Of course this is all chasing after the wind. While the device that’ll be shown on May 3rd at Samsung’s press event will almost certainly be the much-rumored Galaxy S III, there’s very little verified information to be had even at this late stage,” cautioned Michael Crider at Android Community.

“Samsung has kept this device and anything official to do with it under pretty tight wraps this time. We are gonna file this one in the rumor bin, for now anyways,” wrote Stormy Beach at Android Spin.

Other Stories on Blogs

Tied with Samsung as the No. 2 story on blogs last week was a discussion about OpenSecrets.org, a site that lists political donors.

Two Huffington Post/Center for Public Integrity articles linked to OpenSecrets.org, and the articles were widely shared. One was about how beer and wine wholesalers have played a role in pushing voter ID laws and linked to Open Secret’s list of Top All-Time Donors. The other article discussed the salary and lifestyle of the conservative political organization FreedomWorks chairman, Dick Army, and included Open Secret’s list of which candidates received money from FreedomWorks.

Several subjects were tied for the No. 3 spot. One was the passing of TV rock n’ roll pioneer and American Bandstand host Dick Clark, at age 82. Many bloggers wrote that they would miss Clark and reminisced about the past.

“Nearly every person with access to television at some point in the last thirty years has had their life at least mildly impacted by the presence of Dick Clark,” wrote James at Under the Gun Review, “Rest in peace, Dick. You will be missed.”

Another No. 3 subject was the photo sharing app Instagram, which was recently purchased by Facebook shortly after it was made available to Android users.

Apple’s senior vice president of marketing, Phil Schiller, wrote a disparaging tweet about Instagram, saying “It ‘jumped the shark’ when it went to Android.”

“Jumping the shark” is an expression commonly used when television shows start to decline in quality. It refers to an episode of the 70’s and 80’s sitcom Happy Days when one of the main characters, Fonzie, literally jumped over a shark on water skis.

Schiller later clarified his statement saying that Instagram is “a great app and community,” but said he missed the time when it was “a small community of early adopters sharing their photographs. Now that it has grow[n] much larger the signal to noise ratio is different.”

Bloggers quickly grasped onto Schiller’s words, making fun of him for being a snob.

Another top story was about the Harry Potter fan site, Pottermore, opening up to the general public. And that was followed by speculation about the date of Facebook’s initial public offering, which according to reports, is expected to happen on May 17.

The week on Twitter was dominated by pop singers and trending hash tags. 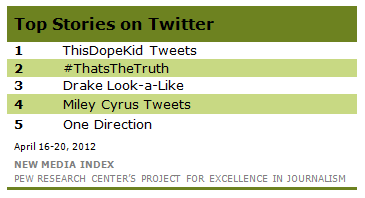 In first place were tweets from user @ThisDopeKid, who shared images and his thoughts on some trending hash tags, like this one on #ThingsPeopleDoThatGetOnMyNerves.

In second place, was another trending hash tag, this for #ThatsTheTruth, where people shared updates, like this one of a user’s typical week.

The rest of the top five Twitter stories for the week were about pop stars. R&B artist Drake came in at third place with an image of a teenage girl who showed some resemblance to the singer.

At No. 4 was singer/actress Miley Cyrus, sharing two photographs, one of her with a new pair of sunglasses and the other with her pet dog.

And wrapping up the top five list was recurring Twitter favorite, One Direction, this time featuring group member Harry Styles posing with a koala.

A tragic road accident in Kyoto, Japan was the most viewed news-related video on YouTube last week. The top two videos featured footage of the April 12 vehicle tragedy that killed eight people, including the driver, and injured at least eight others.

Thirty-year-old Shingo Fujisaki drove a minivan through a red light at a crowded intersection and struck many pedestrians before running into a pole. The accident took place in Gion, Kyoto’s main geisha district and an area packed with tourists, many of whom were visiting the cherry blossoms. Fujisaki’s family told public broadcaster NHK that he had epilepsy. His doctors said that they urged him not to drive because of his condition.

On the No. 1 top news video, a YouTube user was filming near Gion when the tragedy occurred and captured the sound of the impact of the accident. The No. 2 video was an eighteen-second-video showing the minivan smashing into a telephone pole after hitting a crowd of pedestrians.

Note: For the week studied, Technorati was down four out of five days and Twitturly was down for all five days. Top stories on the NMI were determined via the remaining sources.

Net Neutrality and the Mosque Furor Lead the Blogosphere