A nearly 150-year-old letter became a hot topic of conversation online last week, and in the process, illustrated many of the aspects of social media that its users find so attractive. 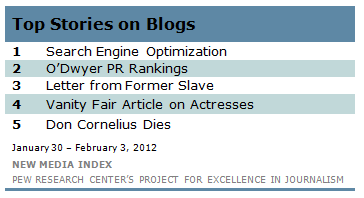 865 by Jourdan Anderson, an emancipated slave living in Ohio. Anderson was answering his former owner, who had asked Anderson return to Tennessee and work on his farm. Anderson’s prose was so creative and rich it attracted wide attention and considerable discussion in a digital space Anderson could never have imagined.

For the week of January 30 to February 3, Anderson’s 147-year-old letter was the third-most linked-to subject on blogs, according to the tracking of social media in The New Media Index by the Pew Research Center’s Project for Excellence in Journalism.

The discussion took several directions. Many people admired the letter for its poignancy and wit and shared it with friends. Others questioned the letter’s authenticity. A handful of people took advantage of the breadth of information available online to try to verify the letter’s genuineness. For others, the letter became the trigger for a complex discussion of race and slavery.

“To My Old Master”

Anderson’s correspondence was believed to have been first printed in the New York Daily Tribune in August 1865 (a picture of that newspaper is available here). However, the inclusion of the letter on the Letters of Note website gave the story new life after Yahoo News highlighted it in a story coinciding with the start of Black History Month.

“A newly discovered letter from a freed former slave to his onetime master is creating a buzz,” reported Yahoo’s Eric Pfeiffer. “Letters of Note explains that in August of 1865, a Colonel P.H. Anderson of Big Spring, Tennessee wrote to his former slave Jourdan Anderson, requesting that Jourdan return to work on his farm.”

The contents of Anderson’s letter, who had escaped from slavery and was doing paid work in Ohio with his family, quickly fascinated bloggers-particularly the artfulness that Anderson used to decline his former master’s request.

“Although you shot at me twice before I left you, I did not want to hear of your being hurt, and am glad you are still living,” Anderson wrote his former owner. “I would have gone back to see you all when I was working in the Nashville Hospital, but one of the neighbors told me that Henry intended to shoot me if he ever got a chance.”

With a tinge of sarcasm, Anderson, who as a freeman now earned 25 dollars a month and sent his children to school, described what it would take for him to return to work at the farm where he had been enslaved.

“We have concluded to test your sincerity by asking you to send us our wages for the time we served you…I served you faithfully for thirty-two years, and Mandy twenty years. At twenty-five dollars a month for me, and two dollars a week for Mandy, our earnings would amount to eleven thousand six hundred and eighty dollars,” he calculated. “If you fail to pay us for faithful labors in the past, we can have little faith in your promises in the future.”

Finally, Anderson signed off: “Say howdy to George Carter, and thank him for taking the pistol from you when you were shooting at me.”

After Yahoo publicized the letter, a number of news organizations posted stories about the subsequent surge of interest in it, including The Huffington Post, The Atlantic, Britain’s Independent and the popular blog Boing Boing.

As for Bloggers, many were taken by the richness of the text.

“Please take a minute, if you have one, to read it through,” recommended Gaius Publius at America Blog. “You won’t be displeased – it’s a treat from end to end.”

“When I reached the apex of the letter, which is a request of ‘some proof that you were disposed to treat us justly and kindly’, I laughed out loud,” shared Motley News.*

As with much information posted online, a few people immediately raised questions about the letter’s authenticity. Some wondered if the language was too modern or if a former slave, unlikely to be fully educated, could have written or dictated it.

In response, a number of people including historians tried to use the web to dig up clues about the letter’s origin.

Jason Kottke, for example, used the site Ancestry.com to uncover a census from 1870 showing a Jourdan Anderson living in Ohio with Mandy, his wife, and four children. Kottke also found a record of Anderson’s death in a 1905 issue of the Dayton Daily Journal by searching the obituaries available from the Dayton library system.

David Galbraith tweeted a link showing details about Anderson from a 1900 census.

On Snopes.com, a website known for investigating online rumors, a discussion on the message boards uncovered even more information such as pictures of the letter as it appeared in the Pennsylvania newspaper The Agitator in 1865.

While none of evidence was determinative, most of the discussion seemed to lean toward believing the letter was real.

Michael Johnson, a professor at Johns Hopkins University, did his own research and concluded that the people were real and that the letter is “probably authentic.”

After looking through census data and slave records, Johnson told The Huffington Post, “That in itself is not conclusive proof that the letter is real, but the slave owner was real and he had plenty of slaves.”

Johnson added that Anderson could not read or write, according to the 1870 census, but the letter could have been written by his 19-year-old daughter, Jane, who was listed as literate.

Rob Baker, a graduate student studying American history and author of the blog The Historic Struggle, who did his own digging and determined that the letter was likely legitimate, summarized the process.

“As historians we would like nothing better than the smoking gun but more often than not we are left only with the trail. This trail suggests that the letter is real,” Baker wrote. “The theory presented here is that the letter is legitimate, written by Jourdon, intended for Colonel P.H. Anderson and not just advancing an emancipation agenda. As always, this is open to debate and improvement.”

The subject matter also initiated some discussion about race.

“I’m glad my white family was from the North. I’d be ashamed to know my ancestors took part in such disgusting behavior,” Luke, a commenter on the site Twenty-Two Words, proclaimed.

“Why would you be ashamed of what your ancestor’s did?” asked Amber in response. “My family lineage is pretty clearly telling that I am a direct descendent of what used to be a very large ranch that owned dozen, if not hundreds, of slaves…Am I ashamed of them? No. Because they aren’t me. They were idiots and cowards, but they weren’t me. To act like you are better than me because your ancestry might be cleaner is arrogant and horrifying.”

Yet for some, the journey into history left them with other thoughts.

“If Mr. Anderson had taken up writing professionally, he could have given Mark Twain and Bret Harte a run for their money,” praised Peg at Life and Other Goofiness.

For the second week in a row, and the third time so far in 2012, the subject of Search Engine Optimization, otherwise known as SEO, was the top subject tracked by PEJ on blogs. Last week, bloggers focused on a post on Search Engine Watch which recommended questions to ask companies that provide SEO services.

A post promoting the O’Dwyer rankings, a list rating many of the top public relations firms in the country, was the second most linked-to subject.

A Vanity Fair cover shoot and article focusing on eleven of Hollywood’s “thoroughly modern actresses” including the Oscar nominated stars Rooney Mara and Jessica Chastain was No. 4.

And news of the apparent suicide of Soul Train creator Don Cornelius at the age of 75 was fifth.

On Twitter, meanwhile, pop culture and entertainment were the dominating topics of conversation. 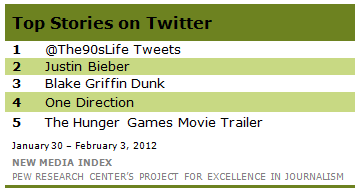 For the third week in a row, viral tweets from the feed @The90sLife showing pop culture references from the 1990s and reminiscences from childhood drew significant attention, last week finishing as the top subject.

Tweets and pictures from teen singing star Justin Bieber were No. 2.

Third was a YouTube “>highlight from a professional basketball game featuring a dunk by Los Angeles Clipper Blake Griffin. Some fans felt the play was the best dunk of all time.

Tweets featuring the British-Irish boy band One Direction were the fourth largest subject, followed by a video trailer for the upcoming movie, The Hunger Games, based on the popular book series by the same name.

And on YouTube last week, the country of Russia was widely represented as three of the top five videos involved Russian people-although the subject matter varied significantly.

The top video, coming from news channel Russia 24, showed Vladimir Zhirinovsky, the leader of the Liberal Democratic Party of Russia (LDPR), speaking during a State Duma session about allegations of massive vote fraud in the December 4 parliamentary elections. These elections allowed Prime Minister Vladimir Putin’s United Russia party to retain its majority in parliament and sparked the biggest anti-government protests in two decades.

The No. 3 video was a gaffe made during a Russian television news program that related to the event. An anchor from Krasnoyarsk accidentally said the name of Putin instead of Vladimir Lenin when commenting on the debate in the blogosphere about whether Lenin’s preserved body should be removed from its Red Square mausoleum and buried.