When a Pulitzer Prize winning fact-checking site announced its “Lie of the Year” for 2011, it set off a partisan firestorm in the blogosphere triggered by liberal critics of that choice.

According to PolitiFact.com, a non-partisan watchdog organization owned by the Tampa Bay Times, the assertion by many Democrats that “Republicans voted to end Medicare” earned the dubious honor as Lie of the Year. Democrats had claimed the plan that passed the GOP-controlled House would have ended the popular health program for seniors. PolitiFact determined that while the Republican plan would alter Medicare, it would not “end” or “kill” the popular program. Some liberals, notably New York Times columnist Paul Krugman, disagreed, asserting that the GOP plan for private vouchers changed Medicare so much that it would, in fact, end the program.

For the week of December 19-23, the debate over the Lie of the Year was the No. 3 subject on blogs, according to the New Media Index from the Pew Research Center’s Project for Excellence in Journalism. 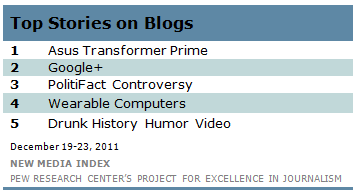 Most of the links went to a post called “PolitiFact R.I.P.” by Krugman who said the so-called lie was actually true, and charged that PolitiFact was terrified of being considered partisan if they were to “acknowledge the clear fact that there’s a lot more lying on one side of the political divide than the other.”

Left-wing bloggers overwhelmingly supported Krugman’s criticism, arguing that the GOP did try to end Medicare, even if they kept a program around with the same name. Others agreed that PolitiFact was guilty of buying into a false equivalency between lies told by Democrats and those told by Republicans, and that the site’s motives were less about facts and more about appearing non-partisan.

Lie of the Year

In the eyes of liberal bloggers, the statement that ‘Republicans voted to end Medicare’ was true, and many examined the intricacies of the Ryan proposal to defend that view. Much of the conversation revolved around the definition of the word ‘end.’

“If I take your house, burn it down, but then say that it’s still ‘your house,’ it’s not a lie for you to say that I burned down your house,” explained Jamelle Bouie at The American Prospect. “The program passed by House Republicans was designed to end the universality of Medicare by sharply reducing its benefits to seniors, and leaving them to fend for themselves.”

“Of course, it’s pretty clear that drawing complaints from liberals is basically the point here,” concluded Jonathan Chait on the blog for New York Magazine. “Politifact is a group that requires roughly equal criticism from right and left in order to maintain its credibility. Indeed, it cites such criticism in order to make the case that we should treat it seriously-see, both sides are complaining!”

PolitiFact received thousands of emails objecting to its decision and posted a response. After pointing out that other fact-checking sites such as Annenberg’s FactCheck.org and the Washington Post’s FactChecker agreed with their view that the line was a lie, they defended themselves from claims that they had made themselves useless or, in the words of Jim Newell of Gawker, even “dangerous.”

“Yes, PolitiFact is dangerous,” PolitiFact replied. “We have disrupted the status quo because we’re doing what journalists should have been doing for a long time-holding politicians and pundits accountable for their words.”

Most conservative bloggers agreed with their liberal foes on the political motivation behind PolitiFact’s ruling, but supported this specific decision anyway.

“The clearly left-leaning Politifact announced what it sees as the Lie of The Year for 2011,” posted Nonsensible Shoes. “It turns out the Democrats claim that Republicans voted to end Medicare is a big fat lie. I guess Politifact is trying to remain relevant and appear unbiased. Too little, too late.”

“While I share Mark Hemingway’s concerns about the rise of fact-checking operations, he also points out that it is harder to get one of these operations to point out a misleading claim from the Democrats, so that fact that the Medicare claim topped the list gives this assessment an added level of credibility,” decided Tevi Troy at National Review Online.

The controversy led some to question whether the idea of a non-partisan and objective fact-checking operation was even viable in the current political climate.

“I wrote about the core problem facing the new breed of political fact-checkers: The political right is more factually wrong, meaning that taking a strictly ‘bipartisan’ approach will inevitably leave the fact-checkers themselves guilty of phony ‘balance,'” asserted Chris Mooney at DeSmogBlog.

“They [fact checkers] have no actual power, so their only influence comes from the public’s sense of their legitimacy,” decided Ezra Klein of the Washington Post. “And about half of the public leans towards one party and about half of the public leans toward the other. That means PolitiFact and these other outlets need to find some uneasy balance between the parties, too. But that just means the parties will have plenty of opportunities to decide that these are hackish, partisan operations.”

On YouTube, the reaction of North Koreans to the passing of the Supreme Leader of North Korea, Kim Jong Il, drew the most interest-in part because the videos contained scenes that surprised many viewers.

Two of the top five most viewed news videos on the site last week, including the No. 1 clip, consisted of North Koreans openly weeping and mourning over the death of their leader for the past 17 years.

To many observers, the shots of civilians crying over the death of a dictator who oppressed the North Korean people were shocking and unbelievable. The vast majority of those who left comments about the video refused to believe the emotions were genuine.

“This is all fake, these people don’t have it in them to cry,” commented fypong. “they have been persecuted and oppressed for so long, complete brainwahing by something I can only describe as pure evil.”

“They were forced to cry otherwise they get killed,” agreed alyassitongguapo. “Just imagine, why did these people cry to a man who gave them sufferings, these people are not idiots. But because of fear to die they cried instead of celebrating the death of the dictatorship.”

Other than the debate over PolitiFact, technology was the major focus in the blogosphere last week.

The No. 1 subject was the same as two weeks ago: positive reviews of the brand new tablet computer called Asus Transformer Prime. Last week, all the links were to an Ubergizmo article which said the device “is easily the best Android tablet and is possibly the best tablet, period,” and included many pictures of the computer and a video of someone taking the product out of its packaging.

A post on the official Google Blog about future improvements to Google+ was the No. 2 subject. Among the promised additions will be the ability for users to control the volume for different individuals they are having streaming conversations with, and more useful and attractive notifications.

The fourth-largest subject was a post on the New York Times technology blog about Apple and Google beginning development of “wearable computers.” These new products would make traveling with smartphones easier by attaching them to one’s clothes or body, such as being wrapped around a person’s wrist.

The fifth most linked-to page was a humorous video on the comedy site, Funny or Die. The clip, part of a series called “Drunk History,” features an intoxicated man reciting a well-known Christmas poem while famous actors act out his strange utterances.

On Twitter, there was a heavy emphasis on pop culture news, especially the famous musicians who are 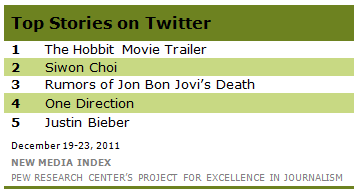 The most linked-to subject was the “>trailer for the upcoming film The Hobbit, to be released in 2012 based on the J. R. R. Tolkien book of the same name.

Siwon Choi, a popular South Korean singer and actor, was the second biggest subject as several of his tweets and pictures were frequently re-tweeted. Among them were a photograph of a sun setting over a city street with the message, “Time will heal all” and a picture of three people looking very excited while anticipating the arrival of Santa Claus.

False rumors that American singer Jon Bon Jovi had died, along with his response, constituted the third-biggest topic on Twitter. Responding to reports that he had been found dead in a hotel in Asbury Park, Bon Jovi posed for a picture holding a sign reading, “Heaven looks a lot like New Jersey.”

For the second time in three weeks, the British-Irish boy band One Direction was a popular subject. Last week, a “>video diary where the group answered questions from fans was the fourth-most tweeted page.

And a “>video of Justin Bieber singing his version of the Christmas song Mistletoe was the fifth Twitter story last week.

Before Trump Tested Positive for Coronavirus, Republicans’ Attention to Pandemic Had Sharply Declined

The Shutdown Drama Drives the News