On October 17, PEJ issued a detailed report assessing the tone and level of coverage of the presidential candidates from a wide swath of news outlets and blogs from May 2 through October 9.

This report updates that data through November 27.

In the last seven weeks, two former frontrunners (Cain and Perry) saw the tone of their news coverage become sharply negative. The coverage of the ever present second candidate, Romney, also became more critical. And the new frontrunner, Gingrich, has enjoyed only a modest improvement in tone.

Indeed, as he has surged in public opinion polls, the narrative about Gingrich in the news has changed in only the following way: it has moved from a double digit negative differential to something in single digits.

Overall, in the 30 weeks studied since May, Gingrich has enjoyed only one week in which coverage was clearly more positive than negative, September 19-25, and then just modestly, with positive assertions outnumbering negative by four points.

Since then, his coverage has either been mixed (within three points on either side) or negative. In November, as his poll numbers rose, Gingrich has seen three clearly negative weeks of coverage and one that was mixed. One other factor is that in recent weeks, the amount of coverage of Gingrich has grown dramatically.

As Gingrich has risen in the polls, two others saw their narratives in the news become negative. One of those candidates, Cain, was the subject of intense coverage. The other, Perry, saw attention wane.

In the run-up to his decision to suspend his campaign on December 3 Cain experienced six consecutive weeks in which his negative coverage outstripped positive. That downturn in the tone of Cain’s coverage coincided to a large degree with a huge spike in attention to him in the news media. In October and November as Cain emerged as a surprise frontrunner and then was faced with multiple allegations of sexual harassment, he registered as a primary newsmaker in 35% of all the presidential campaign stories studied and as a significant newsmaker in 45%. His closest competitor for coverage in that two-month period, Mitt Romney, was a dominant newsmaker in 17% of the stories and a significant one in 28%.

Thus Cain’s departure from the race not only coincided with a sustained period of negative attention. That attention (in social media as well as news media) was also intense in volume.

Perry has seen an even more negative portrayal in the last two months, but that has coincided with the news media paying him less attention. He has endured eight straight weeks of more negative than positive coverage as he stumbled on the campaign trail and slumped in the polls. 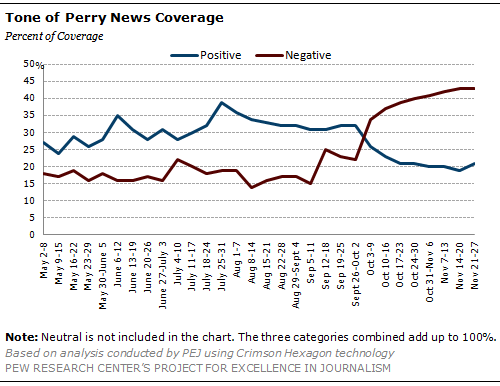 In that month, when the narrative turned more negative, media attention to Perry also diminished dramatically as he generated only about one-third as much news coverage as he had in October.

The tone of President Obama’s coverage, which has run about 4-1 negative over positive, has remained virtually unchanged over the past seven weeks and stands at 9% positive, 35% negative and 56% neutral.