The day following Thanksgiving, referred to as Black Friday, is traditionally considered the beginning of the Christmas shopping season. And for the week of November 28-December 2, Black Friday triggered a discussion about commercial excess that helped make it the No. 2 subject on blogs, according to the New Media Index from the Pew Research Center’s Project for Excellence in Journalism.

Most of the focus was on a single incident at a Wal-Mart in Southern California. One woman was so intent on getting an Xbox video game console on sale that she pepper sprayed up to 20 fellow shoppers. During the chaos, the suspect escaped arrest only to turn herself in several days later. Authorities, unsure if she actually walked away with one of the Xboxes, said the woman was “competitive shopping.”

News of the event spread quickly online as some bloggers decried the frenzy that now accompanies Black Friday. A number of bloggers, however, found humor in the craziness surrounding the shopping holiday, and the notion of pepper spraying other customers developed into a common online meme. 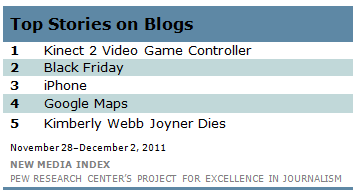 Other bloggers focused on Black Friday for a different reason-the overwhelming sales numbers reported by Apple retailers. Apple products such as the iPhone and the iPad are frequently leading subjects online, and the business records set by the company during this rush were no exception.

On both YouTube and Twitter last week, a debate about racism triggered by an incident in a British subway, was among the most popular subjects.

On Sunday, November 27, a user known as LadyK89 uploaded a two-minute video that shows a woman, later identified as Emma West of London, riding a crowded subway (known in England as a “tram”) with a young boy on her lap when she begins to make racial slurs and spews a series of profane comments at other passengers.

The video became a viral internet sensation during the course of last week. The subject was the third-largest on Twitter as the hashtag #MyTramExperience developed to label the conversation. And a separate video response to the clip from a teenager defending the woman was the most watched news clip on YouTube.

The comments on Twitter were overwhelmingly critical of the woman, who was later arrested for a racially aggravated offence. The discussion was extensive on YouTube as well, as more than 650 people posted video responses and the comment sections filled up with thousands of written messages. There, a mix of opinions about her was part of an often profane conversation.

The incident in which a woman shopping at Wal-Mart used pepper spray on 20 other customers while trying to secure deals on video games led some bloggers to voice concern about what Black Friday had become.

“Black Friday has risen in holiday popularity to the point where family around the hearth and turkey and mashed potatoes are a secondary afterthought to many Americans,” asserted Gary Horton at The Santa Clarita Valley Signal. “Americans are sold that consumerism is our natural state of being…But consumerism is just a belief ‘ism’ like any other dogmatic ‘ism.'”

“We spend the day before giving thanks for all the things we have. Then at midnight we go out and resort to greed-driven animal behavior,” wrote The OCD Diaries.

“This holiday, reject the spirit of greed and consumerism: and not just because of the economy, do it for your family,” advised Good Day, Regular People. “Teach them that the holidays are about sharing. A holiday season without any thought for the poor is an impoverished holiday.”

Some bloggers, however, took a more humorous view of the pepper spray incident.

“I don’t even know/am too lazy to look up what Wal-Mart’s Black Friday Xbox deal was, but I seriously doubt it was worth getting pepper-sprayed/going to jail over. That said, I’d let you mace me in the face…for 50% off LEGO sets,” joked Geekologie.

“On the day after Thanksgiving in the San Fernando Valley there was no peace on Earth,” posted Jack Huber at Stupid Criminals, reviewing the details of the encounter. “She unholstered her pepper spray and sprayed her fellow bargain hunters. Left and right they fell, unsure exactly what had happened to them. (To paraphrase Monty Python’s Flying Circus … nobody expects pepper spray in the face during a holiday shopping spree!)”

And news of the story spread so quickly, that almost immediately, the notion of pepper spraying fellow shoppers became an online meme.

“All-in-all, within 5 hours, we went to Starbucks, Best Buy, Target, Walmart, Kohl’s, Macys, then back to [Best Buy],” wrote Mejia Mamma while recounting her eventful weekend. “We didn’t encounter any psycho people with pepper spray or theft in the parking lot at gun point-so I’d say it was a successful shopping adventure – zero drama for this mamma!!”*

While some on social media were reflecting on the downside of Black Friday, others were more interested in the bargains and sales figures for major retailers, especially the Apple company.

A report that Apple retail stores broke all of their sales records and exceeded their Black Friday forecasts drew the most interest from the business community.

“Despite a less than vigorously healthy economy, Apple’s retail sales on Black Friday this year were stellar,” summarized Michael Essany at Mobile Marketing Watch. “In fact, Apple may have seen its single greatest day of retail sales in company history the day after Thanksgiving…Between iPhone 4S sales and a holiday shopping blitz of epic proportions, the tech team in Cupertino will finish out the year rolling in cash.”

The clip of Emma West on a London tram screaming at nearby passengers and claiming that minorities were not “British” got the attention of many users of social media.

For those tweeting about the incident, the conversation was overwhelmingly critical of her rant.

“That woman on that tram needs a punch!” shared Emily Urso. “Doesn’t matter where you come from or what skin colour you have. Open your eyes, we’re in 2011.”

“That video of the racist woman on the tram in Croydon is actually vile. Ignorance is a disease,” agreed Shann France.

“I feel sorry for her children, the police should come down on her like a tonne of bricks,” added British tweeter @tomufc.

And on YouTube, hundreds of people posted video responses to the incident while speaking directly into the camera. Ten days after the original video was uploaded, more than 650 YouTube videos were labeled with the terms “My Tram Experience” and “response.”

The most viewed response was very different than the one seen on Twitter.

Sean Allan, a teenager known as the video blogger MarmiteMan4, applauded West for having the courage to stand up to the minorities around her. “You can’t have a first-world country with a third-world population,” Allan argued while deriding political correctness and multi-culturalism. “That’s showing British spirit.” (Warning: the ” target=”_blank” rel=”noopener noreferrer”>video includes racially charged language and profanity.)

Allan’s response was viewed more than 700,000 times in the first week, and thousands of people left conflicting comments-often with crude and insulting language.

“I cannot believe you are justifying this woman on the tram,” wrote sopapiah. “What is wrong with you? Those people leave their countries to seek a better life. You should be proud that you live in such a wonderful country that the less fortunate are attracted to it because they can have a better life in it. This disgusts me.”

But some supported Allan.

“There ARE INDEED too many immigrants in the UK and it’s eroding our own national identity,” wrote englishguy2010. “If you add too many different herbs to a soup, it ruins the soup. Many places in the UK are densely ethnic. That’s not ‘multiculturalism’. It’s ethnic takeover.”

A few commenters thought that the arrest of West was the real issue.

“Good video, Marmite Man 4, I agree with your sentiments, but even more important is the establishment of thought crime (by the UK) in pursuit of the ‘greater good’ of political correctness,” explained The Canine. “The central issue is GETTING ARRESTED for expressing those views. Hell, she was holding a baby, she wasn’t threatening anyone or gettting in a fight.

This incident demontrates how political correctness is, at it’s core, contrary to liberty.”

The only subject to draw more attention on blogs last week than Black Friday was news that Microsoft’s next-generation Kinect device, a motion sensing input device for the Xbox 360 video game system, will have improved capabilities so that it can read lips, track the volume of player voices and identify facial characteristics.

Apple’s iPhone 4 continued to be a popular focus as it was the No. 3 subject last week. Bloggers linked to a positive and extremely detailed review of the iPhone 4S on Ubergizmo, in addition to a report that an iPhone in Brazil caught fire following a similar incident in Australia.

A post on Google’s official blog announcing a new Google Maps feature giving smartphone users access to detailed maps of the inside of large buildings such as airports or shopping malls was the No. 4 subject.

And condolences for the passing of Kimberly Webb Joyner, the wife of Dr. James Joyner, the publisher of the popular conservative blog Outside the Beltway, was the fifth-largest subject.

Music star and social media favorite Justin Bieber was back among the top subjects on Twitter for the first time in a month. Last week’s online Bieber fever included a video of him dancing while ice skating, and a tweet featuring a still photograph of the singer wearing 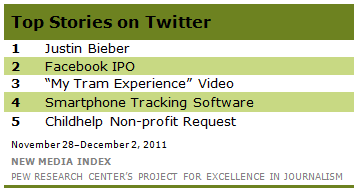 A story that Facebook is considering an initial public offering that values the company at more than $100 billion was the second-largest subject.

The British subway incident was No. 3, followed by news that a software analyst identified monitoring software called Carrier IQ that is installed on millions of smartphones without the knowledge of users.

And a page from Childhelp, a non-profit charity that works to prevent and treat child abuse, was the fifth-biggest subject. The organization was encouraging users to participate in an online survey sponsored by Zoomerang. The survey included a list of non-profits and the group receiving the most votes would receive a $3,000 prize.

On Social Media, a Conversation about Race