While the news agendas often differ on blogs and Twitter, last week was an exception with the same three topics dominating discussions on both. 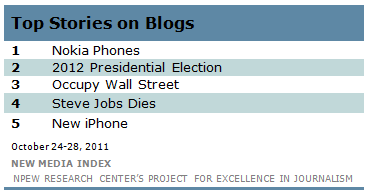 One was the 2012 presidential election, which was the No. 2 story on blogs and No. 4 on Twitter for the week of October 24-28, according to the New Media Index from the Pew Research Center’s Project for Excellence in Journalism. And while the presidential campaign has registered among the top five stories in the mainstream press in each of the last 12 weeks, this marks only the third time it has shown up among the leading topics in the New Media Index in that period.

But even as the campaign surfaced as a leading story on both blogs and Twitter, the two social media platforms focused on different aspects. Many bloggers voiced their displeasure with the GOP candidates, most particularly Rick Perry. On Twitter, the emphasis was on an unusual campaign ad and an article discussing using social media in the campaign.

Since his death, Jobs has been one of the top stories on blogs or Twitter every week except one.

Liberal bloggers trained their sights last week on Rick Perry, arguing that he was kowtowing to conspiracy theorists and resurrecting the birther issue when he said he doesn’t “have a definitive answer” on whether President Obama was born in the United States.

Republican analyst and power broker Karl Rove also was critical of Perry’s comments, saying on Fox News, “You associate yourself with a nutty view like that, and you damage yourself.” That also generated in a response online.

“Rick Perry is so desperate to prop up his flagging presidential bid he’s listening to the birther king,” wrote Taylor Marsh.

“Over the weekend, we got another reminder that Rick Perry’s nomination strategy is to pander to the crazy: thus his new birther comments,” wrote Jonathan Bernstein on a Washington Post blog. “They fit right in with a campaign that embraced or at least flirted with many of the more goofy Tea Party ideas, such as repealing the direct election of United States Senators.”

In his remarks on Fox News, Rove also noted that Herman Cain may not be “up to the task” of president, asserting that he demonstrated a lack of understanding about key issues.

On Twitter, Cain was also a popular subject of discussion, thanks to his “>release of an October 19 campaign ad in which his chief of staff, Mark Block, talks about the campaign and takes a drag on a cigarette before the image changes to one of Cain staring at the camera and slowly breaking into a smile.

Many people on Twitter thought the ad was a hoax. The New York Times even published a piece explaining that it was not.

“Herman Cain has the most insane campaign ad you’ll ever see,” wrote the online humor site Funny or Die.

“You know it’s a weird campaign season when reporters must verify that an ad by a leading candidate is not intended as a joke,” wrote Taylor West.

Twitter users also shared an article from Mashable that explained why Obama needs social media to win the 2012 election in order to continue gaining support from younger voters.

The Occupy protests, which started on Wall Street, inspired very different conversations on blogs and Twitter. On blogs, the discussion was ideological, mostly dominated by conservatives criticizing the protests. On Twitter, however, users either shared news articles and videos of the Occupy Oakland demonstration or voiced support for the protestors.

Bloggers seized on two storylines dealing with the protests. One was an article from Andrew Breitbart, a conservative activist, who wrote about an ABC reporter being threatened at the Occupy Oakland protests in California. Conservative bloggers largely reposted the article with little to no commentary.

The other story was a Fox News piece headlined ACORN Playing Behind Scenes Role in ‘Occupy’ Movement. The story-noting that former members of the now defunct community organizing group ACORN were raising funds and working on behalf of the protestors-triggered criticism from a number of bloggers.

The article also said that “about 100 former ACORN-affiliated staff members from other cities” were paid to attend and support Occupy Wall Street.

“Occupy Wall Street is paying people to protest? Not only is that brazenly pathetic, but it seems a little capitalistic if you ask me,” wrote Brian Koenig, “Of course, that would be giving capitalism a bad name. At least corporations stimulate the economy. OWS just blocks traffic and gives the city air an unfavorable scent.”

“I told you two years ago that we haven’t heard the last of ACORN, that they were flying under the radar and still need to be watched,” wrote Chris Collins at The Navigator.

“It should come as no surprise that ACORN is knee deep in Occupy Wall Street,” wrote Justin Credible at Habled 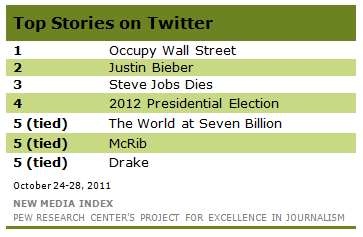 ash, “They both desire the same outcome: Democrats in control of the government and taxpayer dollars to subsidize them. The article is rather lengthy, but it connects the obvious dots.”

“Even if the association with ACORN were true, what would be the harm?” asked Mark at News Corpse, “We know now that ACORN was fully exonerated, while their critics were repudiated. There is certainly no shame in being associated with an organization that fought for decades on behalf of the disenfranchised members of our society.”

On Twitter, the tone was markedly pro-protestor, with Twitter users sharing images and videos of police using “>tear gas during protests in Oakland.

While most tweeters were simply sharing the images, a few opined on the event.

Both bloggers and Twitter users shared news about Jobs’ quirky habits that were revealed in the biography written by Walter Isaacson.

“Seriously, only Steve Jobs would get to drive without a license plate,” tweeted Garrett Moon.

Isaacson also appeared in a several-part interview on 60 Minutes, which was widely shared and lauded on blogs.

“Very intriguing,” wrote Jot It Down.

Other bloggers discussed whether Aaron Sorkin would write the screenplay for a biopic of Steve Jobs.

“You had to see this one coming a mile away after hearing that Sony Pictures obtained the rights to a film version of Steve Jobs’s biography,” wrote Chris Rawson at TUAW.

“Sorkin is a good bet, but let’s not pretend he’s a risky option,” wrote Michael R. Gideon at 100gf.

The two other top stories on blogs last week involved mobile phone companies. The No. 1 story was about Nokia cell phones. Tech bloggers were looking forward to the release of the new Lumia 800 and 710 Windows phone on October 26, but were also excited to get leaked information about two other phones, the Nokia 900 and a phone expected next year with the code name Apollo.

Nokia was the top cell phone company in the late 1990s, but has recently been squeezed on both ends of the market: by low end phones made by Asian manufactures and by smartphones on the other side. While it is still the biggest mobile phone company on the market, its global market share dropped below 30% for the first time in a decade this year. Bloggers thought that the release of a competitive Nokia smartphone could change the cell phone landscape.

“TheNokiaBlog has made my day by showing the upcoming Nokia 900 Windows Phone and the spec sheet is enough to make me drool,” wrote Farhan on SenseApplied.

The new iPhone 4S was still a hot topic online, a few weeks after its release, and was the No. 5 story on blogs for the week.

A series of diverse subjects filled up the rest of the top stories on Twitter for the week. The second-most popular topic was teen singing sensation Justin Bieber, who released a Christmas single last week. It marks the third time for Bieber in the past five weeks.

Tied for fifth place were three stories. One, a BBC interactive related to the seven billionth human born gave users the opportunity to find out their birth rank in the world’s population and other details about their lives by sharing demographic data. Twitter users generally thought the tool was “cool.”

Also in fifth place was a Time article on the heart health issues associated with the popular McRib sandwich at McDonald’s that was recently rereleased for a limited time.

“‘The McRib’: for people who have no interest in meeting their grandkids,” joked the actor Zach Braff.

The other link tied at No. 5 was a photo of the rapper Drake on a balcony overlooking Las Vegas.

The No. 1 YouTube video last week is of a group of Polynesian teenagers at a football game in Roosevelt, Utah, performing a traditional Haka dance who were then pepper sprayed by police officers.

But images from the final fall of the Gaddafi regime in Libya dominated YouTube.

Two of the top news videos showed Gaddafi’s son Mutassim after his arrest and before his death in Sirte, Libya. The No. 2 and No. 4 videos captured Mutassim in blood-stained clothes, drinking water and smoking a cigarette.

The No. 3 and No. 5 videos, from Global Post and uploaded by different sources, showed October 20 capture of Col. Muammar Gaddafi, who was hidden in a sewage drain after he tried to escape from his hometown of Sirte. Footage of the wounded dictator when he was still alive was visible on the shaky and graphic video.

Religion in the News

On Twitter, iOS 5 is the Apple of Their Eye