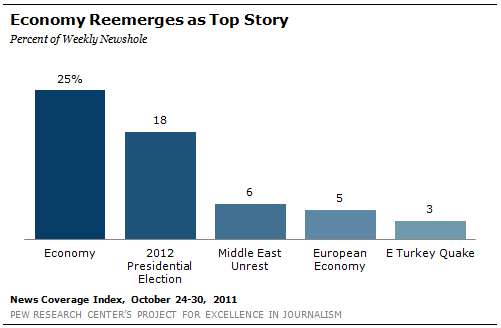 ven by coverage of both a presidential housing relief plan and the Occupy Wall Street protests, the economy accounted for 25% of the newshole last week, marking its highest level of coverage in almost two months.

From October 24-30, the economy filled 25% of the newshole, according to the Pew Research Center’s Project for Excellence in Journalism. That is the most media attention to the subject since the week of September 5-11, (28%) when President Obama’s job speech helped fuel much of the coverage.

Last week, Obama’s plan to make it easier to refinance mortgages and the Occupy Wall Street story combined to account for almost 40% of all the economic coverage. At 5% of the overall newshole, however, Occupy Wall Street fell far below its biggest week of coverage (October 10-16), when it filled 10% of the overall newshole. That was the case despite a spike in drama in a number of cities last week as police clashed with protestors, with one encounter that resulting in a critical injury of an Iraq war veteran in Oakland, Calif.

The 2012 presidential campaign was the No. 2 story last week, accounting for 18% of the newshole—up slightly from 17% the week before. It also ranked as the No. 1 subject on cable news, at 37% of the airtime studied in that sector. Much of the coverage focused on competing tax plans as Texas Governor Rick Perry introduced his flat tax proposal and businessman Herman Cain defended his now famous 9-9-9 plan. Perry’s tax plan was in part responsible for his return to the spotlight, and helped make him a dominant figure in 34% of campaign stories last week, compared to Cain’s 27%. (To register as a dominant newsmaker, someone must be featured in at least 50% of a story.)

The third-biggest story was unrest in the Middle East, at 6%, with the majority of coverage focusing on Libya following the death of Col. Muammar Gaddafi. Many of those news reports told of Gaddafi’s burial, along with his son and top advisor, in an unmarked, secret location in the desert. The previous week, the region was the top story, filling 18% of the newshole.

The No. 4 story last week was the European economic crisis, which accountedfor 5% of the newshole. The media interest revolved around an emergency summit to address Greek debt that ended with a new bailout plan.

Finally, at 3%, was a devastating October 23 earthquake in Turkey, which took more than 600 lives and injured more than 2,500.

On Monday, October 24, President Barack Obama announced he would be making a change to his administration’s housing assistance plan with the goal of making it simpler to refinance. Given the stalemate between the White House and Congress on major economic legislation, last week’s plan was part of an effort by the president to use his executive powers to implement limited changes in policy. And much of the media reaction stressed that point.

on ABC’s World News Tonight, correspondent Jake Tapper reported that “critics say that this new plan will be modest and not help as many people as it should, for instance those who have been hit the hardest by the housing crisis.”

On NBC Nightly News on October 24, CNBC reporter Diana Olick called it a “very limited program” before reciting a litany of housing problems that the program would not address.

And the proposal, designed to help underwater homeowners (those whose homes are worth less than they owe on their mortgage), drew evaluations of Obama’s broader efforts to improve the housing situation. And many of those evaluations were negative. An October 24 Washington Post story called Obama’s early efforts to ease the housing crisis a “critical plan to jump-start the economy,” but added  that “nearly three years later, it hasn’t worked out.”

The story went on to suggest that Obama’s mixed record on housing could drag down his chances for reelection. “Doing more to address the housing crisis may be crucial not only for an economy flirting with another recession but also for a president running for reelection,” said the Post.

And in some quarters, Obama’s proposal drew praise. In an October 24 report on the PBS NewsHour, anchor Judy Woodruff asked University of Pennsylvania professor Susan Wachter if the new Obama plan would provide a light at the end of the tunnel for struggling homeowners. “I think it’s a win-win,” said Wachter. “I don’t think it’s a game-changer, but I do think it helps get to that light.” 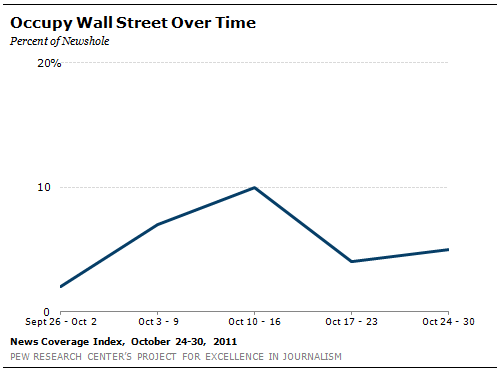 In a week when Herman Cain found himself at the top of the GOP presidential polls, Rick Perry—whose campaign has been struggling—took the opportunity to cut in on Cain’s turf by introducing a competing tax code plan to Cain’s catchy 9-9-9 proposal. The result was a week of media coverage focused intently on taxes and on Perry as well.

On Tuesday, October 25, Rick Perry revealed his plan to replace the current tax code with a 20% flat rate, in what The New York Times on October 26 called the “centerpiece of an ambitious proposal that aims to overhaul political sacred cows like Social Security and Medicare while slashing the federal budget.”

Fox News Channel’s Carl Cameron drew a direct link between Perry’s proposal and his dive in the polls behind Romney and Cain. “Far back in the polls, Texas Governor Rick Perry tried to jumpstart his campaign with a simple, optional 20-percent flat income tax,” reported Cameron on the October 25 edition of Special Report with Brett Baier.

And indeed, the media themselves appeared to be catching flat-tax fever if only by virtue of the intense coverage of the topic. Yet not all outlets focused exclusively on Republican tax ideas.

When Reich called for higher tax rates for the rich and an increase in federal spending, King said “It’s not my job to say who’s right or wrong, but I would say, Mr. Secretary, that if you’re right, you would unfortunately need the restoration of the monarchy to get your plan through, because the House Republicans aren’t going to adopt a new WPA program.”

The No. 3 story last week, Middle East unrest, remained focused on Libya and the aftermath of the October 20 death of Gaddafi. While most of the coverage consisted of straight news accounts of the burial of Gaddafi’s body and that of his son, questions persisted about the way Gaddafi was killed. Those questions—combined with the report that 53 Gaddafi supporters were found dead by execution in Gaddafi’s hometown of Sirte and accounts of Libyans filing through a walk-in freezer to see Gaddafi’s body on display— generated some media attention to the behavior and tactics of the victorious Libyan rebels.

The end of the week brought what seemed to be good news after a long series of warnings about the Greek debt crisis. The No. 4 story of the week, the European economy, consisted largely of reports about an emergency European Union summit on the situation in Greece. The bailout plan that emerged rallied U.S. stocks, and at least a few outlets, including the Wall Street Journal, reported on the bailout plan’s impact on the Dow Jones.

A 7.3-magnitude earthquake hit Turkey on October 24, killing hundreds and wounding thousands, making it the worst earthquake there in a decade. It was the No. 5 story last week, with news outlets tracking the growing number of dead and wounded, yet also featuring stories of heroic rescues and against-the-odds survival. 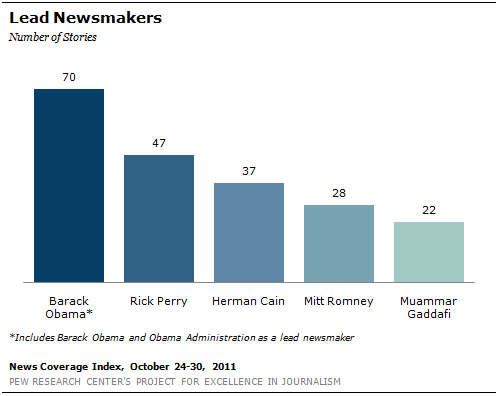 The top five newsmakers from October 24-30 were the same as the week before, though the order of prominence was slightly different.

Largely due to coverage of his mortgage-relief program announcement, Barack Obama was the top newsmaker during the week of October 24-30, featured prominently in 7% of stories studied. That was down from 11% the week before, but right in line with his level in the two weeks before that, when he was also the dominant newsmaker in 7% of stories.

Behind those three was Muammar Gaddafi, a dominant newsmaker in 2% of stories studied. Gaddafi was the No. 2 newsmaker the week before, when he was the subject of 10% of stories.