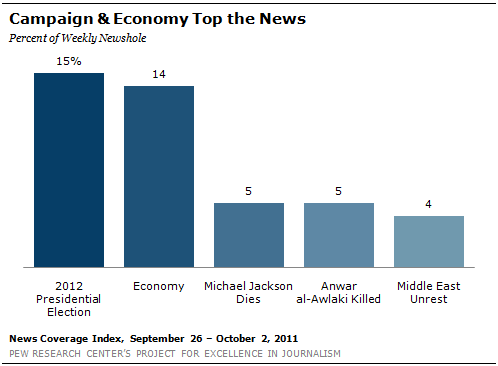 Depending on how you count, anywhere from seven to more than a dozen Republican candidates are running for president. But it was a non-candidate who fueled one of the biggest weeks of campaign coverage to date.

Speculation that New Jersey Governor Chris Christie might enter the fray made the 2012 presidential election the No. 1 story in the news media the week of September 26-October 2, according to the Pew Research Center’s Project for Excellence in Journalism. Coverage of the campaign accounted for 15% of the newshole studied last week. That was the third-biggest week for campaign coverage this year—and the biggest not to involve a candidate debate.

The fervor over Christie last week came on the heels of a shaky debate performance by Texas Gov. Rick Perry, followed by his failure to win the Florida straw poll. And Christie’s intimations that he had not ruled out running were enough to make him a significant newsmaker in 25% of campaign stories examined last week. Some of this came from heavy coverage of his speech at the Ronald Reagan Library on September 27. Christie received nearly twice the amount of attention drawn by Perry (14%) who, up until last week, had been the most-covered Republican candidate since the week of August 8-14, the week he formally entered the race.

A fair amount of campaign coverage last week also fell on another candidate, Herman Cain, the pizza restaurant magnate from Georgia who won the Florida straw poll on September 24. Cain was the No. 3 campaign newsmaker, the focus of 20% of election stories last week.

A straw poll victory, however, does not guarantee that Cain will remain in the media spotlight for long; last week Minnesota Rep. Michele Bachmann, winner of the August 13 Iowa straw poll, was the No. 7 campaign newsmaker last week, prominently featured in only 2.2% of those stories. (To register as a prominent campaign newsmaker, someone must be featured in at least 25% of a story about the 2012 election.)

Close behind the campaign in overall coverage last week was the flagging U.S. economy, the No. 2 story at 14% of the newshole, down somewhat from 23% the week before. This ended a three-week stretch in which the economy was the top story in the news. No single economic event dominated the coverage, though the nation’s weak employment situation drew more attention than other items. A demonstration in New York City referred to as Occupy Wall Street accounted for about 12% of the economic coverage last week.

The trial of Michael Jackson’s doctor at the time of the pop star’s death was the No. 3 story last week, filling 5% of the newshole.  Jackson’s death on June 25, 2009, believed to be the result of a lethal drug cocktail, was a top story, accounting for 17% of the newshole during the two weeks after his death.

At No. 4 last week was the death of U.S.-born cleric Anwar al-Awlaki, who was killed in an airstrike in Yemen by a joint CIA-military operation. Questions over the ethics and legality of killing a U.S. born person without a trial became the subject of much of the coverage, which amounted to 5% of the newshole.

Finally, unrest in the Middle East was the No. 5 story, at 4% of the newshole. Coverage focused on a mob attack on a U.S. diplomatic envoy in Syria and on Saudi Arabia’s move to honor women’s right to vote.

A New Contender for the GOP Nomination? 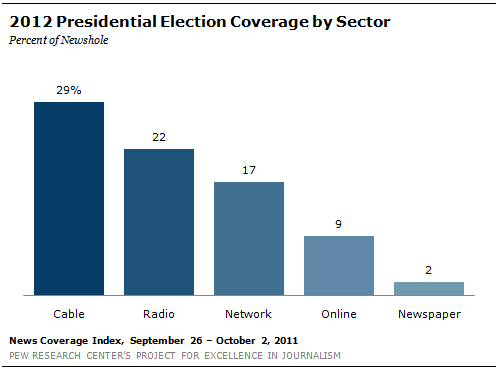 Last week, the 2012 campaign received much wider play on television and radio than in other sectors of the media. That was especially true of cable news, which devoted 29% of the time studied to the campaign, led by MSNBC (37%) and Fox News Channel (34%). The campaign, by contrast, drew much less attention in newspapers and on news websites; on newspaper front pages, it was the No. 14 story of the week, at 3% of coverage.

Questions about New Jersey Governor Chris Christie’s national aspirations, of course, did not begin last week. They had made perennial appearances throughout the early months of the campaign as the GOP primary field was taking shape. But they began in earnest prior to the beginning of the week as reports emerged that Christie had met recently with a number of powerful GOP fundraisers.

In a segment that included a montage of the many denials by Christie that he would enter the race, MSNBC’s Chris Matthews on September 26 puzzled over the rumors. “The GOP field this year is still not satisfactory, and the one name that comes up over and over again—I don’t know why—is New Jersey Governor Chris Christie.”

But Matthews might have answered his own question. He was also only one of many in the media who pointed to the general sense of dissatisfaction among Republicans with their choices.

“They’re looking for a candidate who can win next year,” explained CNN’s Anderson Cooper on September 27. “That’s obviously not unusual, but this is: This time around, the Republicans are also struggling, and struggling titanically, to find a candidate they actually want to win. We’ve seen Michele Bachmann rise and fall, Rick Perry enter and now stumble, now it’s New Jersey Governor Chris Christie.”

Add to that how ABC News’ John Karl described the Chris Christie phenomenon on the Sept. 27 broadcast of World News Tonight: “Even when he says he won’t run for president, the way he says it—blunt, direct, no B.S.—makes many Republicans want him to run even more.”

Christie’s speech at the Ronald Reagan Library in California on Tuesday was a significant part of the tinder fueling the fire. “Everything about Christie’s speech screamed national campaign,” said NBC News chief White House correspondent Chuck Todd on the September 28 edition of the Nightly News.

The flattery was also accompanied by cautionary notes about obstacles Christie would face. Those, according to the coverage, included the scrutiny a campaign brings, image issues brought on by Christie’s weight, and the challenges of entering late. “Assembling a staff and raising money takes time, and Christie will have to move very fast,” declared a CBS News report from September 30.

Joblessness and Its Discontents

Coverage of the economy hovered on no single theme or event, but on a range of items including jobs, the banking industry, and consumer reactions to conditions in the country.

Media outlets continued to follow President Obama’s travels around the country as he pitched his job creation proposal. One of those events, a September 26 town hall meeting at the LinkedIn headquarters in California, was covered by NPR. “Many of the president’s recent events to push his jobs package have had a campaign rally feel to them, with cheering crowds and partisan red meat. This one was still conversational, but still partisan,” reported Ari Shapiro.

And a small piece of encouragement, both for the administration and the unemployed, came when a September 29 report showed jobless claims appeared to have dropped to their lowest level since April. That piece of news, however, came with warnings not to read too much into the data.

The jobless claims report certainly did not seem to stem the tide of public unrest, a sentiment measured in press coverage of Bank of America’s new debit card usage fees and the angry consumer backlash, as well as attention to the demonstrations on Wall Street criticizing corporate greed.

“Consumers are tired of being nickel and dimed,” said consumer advocate Norma Garcia in a September 30 Wall Street Journal story on the new fees, which Bank of America claims are an unintended consequence of lost revenues due to new federal regulations on other debit card fees.

In Manhattan last week, a sit-in known as Occupy Wall Street that began in mid-September born of a general anti-greed sentiment, gained more media attention when hundreds were arrested over the weekend in acts of civil disobedience. Though their goals are “not entirely clear,” according to the Los Angeles Times from September 30, the mood of the group is. “The one thing we all have in common is that we are the 99 percent that will no longer tolerate the greed and corruption of the 1 percent.”

Last week, the trial began for Conrad Murray, Michael Jackson’s doctor charged with manslaughter and negligence which ultimately may have led to the artist’s death. It was the No. 3 story. As with much of Jackson’s life, his death too has become something of a spectacle, and last week, the media had plenty to focus on as the Jackson family entourage loomed heavily over court proceedings. And audio recordings of Jackson’s barely coherent mumblings were replayed on television news outlets, vividly illustrating the severely weakened state Jackson was in during his final hours.

At No. 4 was the U.S. coordinated killing of Anwar al-Awlaki, a U.S.-born radical cleric living in Yemen. Some media reports noted that President Obama’s credibility as a leader tough on terror received a boost with Awlaki, and before that, Osama bin Laden. But other reports questioned whether the Obama administration was justified in ordering the attack given Awlaki’s status, such as a Sept. 30 ABC News report on the ACLU’s criticism of the White House’s neglect of due process.

Finally, a number of events in the Middle East drove that region into the No. 5 spot last week. Some reports reacted to news that Saudi Arabia had on September 25 decided to honor women’s right to vote and stand for office in local elections. Also in the news were stories about the attack of a U.S. diplomatic envoy’s motorcade in Syria, an attack which caused no injuries but provoked a strong response from Secretary of State Hillary Clinton. 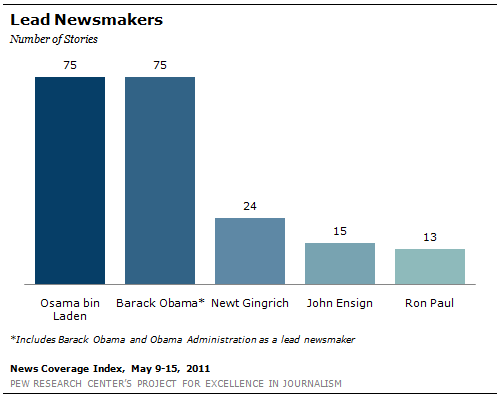 As the media’s focus on taxes, spending and job creation diminished briefly last week, so did Barack Obama’s prominence as a lead newsmaker. He was the focus of 7% of stories last week, down markedly from 16% the week before. (To register as a dominant newsmaker, someone must be featured in at least 50% of a story. This is a different metric than a significant newsmaker in a campaign story, which has a threshold of 25%.)

The next two most prominent newsmakers last week were Conrad Murray and Michael Jackson, who was under Murray’s care when he died. Murray, who was on trial for his alleged role in Jackson’s death, was the No. 2 newsmaker last week, figuring prominently in 5% of stories, and Jackson No. 3 (4%).

At No. 4 was New Jersey Governor Christie (4%). The previous week, the only Republican candidate to enter the top five most prominent newsmakers was Texas Governor Rick Perry, but his coverage dropped off substantially as buzz built up around Christie.

Finally, the No. 5 newsmaker was Anwar al-Awlaki, at 3% of stories last week.