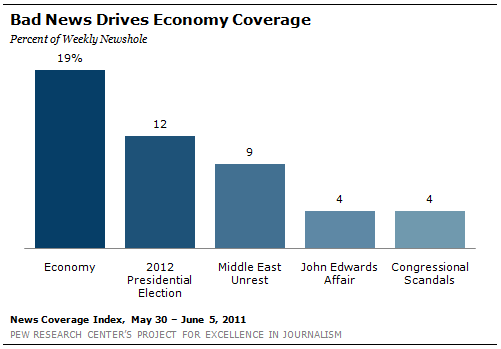 The president’s speech on job creation drove the news agenda last week, making the economy the No. 1 story despite sharing the week with a lively GOP presidential debate, a special 9/11 anniversary and a new terror threat.

Deepening concerns over a double-dip recession, and coverage of Barack Obama’s answer to them, helped the economy fill 28% of the newshole during the week of September 5-11, according to the Pew Research Center’s Project for Excellence in Journalism. That was significantly more coverage than the economy generated the week before, when it was the No. 2 story, at 16% of the newshole.

Obama’s September 8 speech, which introduced a $447 billion package aimed at creating new jobs, was treated by the media as a high-stakes event with implications not only for averting another recession, but also for his presidency. And the pundit reaction to it seemed to break down primarily along partisan lines.

The speech accounted for almost two-thirds of all economic coverage last week. Obama himself was the lead newsmaker in over 50% of all economy stories last week. (To register as a dominant newsmaker, someone must be featured in at least 50% of a story).

Last week’s Republican presidential debate made the 2012 election the No. 2 subject last week, at 15% of the newshole, roughly doubling coverage from the week before. The media narrative about the September 7 event held at the Reagan Library in California focused largely on the battle between two front-runners, Rick Perry and Mitt Romney. Some accounts noted the conspicuously small role Michele Bachmann played in the debate.

Two related stories connected to the 10th anniversary of 9/11 and the continuing war on terror combined to account for 18% of the newshole. The No. 3 story (at 13%) focused on U.S. efforts to combat terror, including a warning last week about a possible attack in either Washington, D.C., or New York to mark the 9/11 anniversary. Commemorations and memorials devoted to that anniversary registered as the No. 4 story, at 5%.

The fifth-biggest story, at 5% of the newshole, was coverage of unrest in the Middle East, as Libyan rebels continued their hunt of deposed leader Muammar Gaddafi, who remained at large, though some members of his family were reported to have fled to neighboring countries. That marked the fourth week in a row that the turmoil in that region ranked among the top five stories, although coverage has dropped for two weeks in a row.

It was clear from the coverage leading up to Barack Obama’s speech on jobs that much was at stake for the president. Gone was much of the previous week’s attention to the mini-controversy that caused Obama to reschedule the speech at House Speaker Republican John Boehner’s request. That narrative was replaced by the setting of great expectations

“There are huge expectations for this speech,” declared Fox News’ Brett Baier on September 6.

Some in the media closely linked Obama’s hopes for re-election to the speech, including ABC News’ Jake Tapper on World News Tonight on September 8: “Down in the polls, haunted by skyrocketing unemployment, President Obama will give a speech this evening that many Democrats believe could be one of the most important of his career.”

Following a September 2 report that employers added no jobs in August, the Associated Press reported on Sept 5 that, “The disappointing report sparked new fears of a second recession and injected fresh urgency into efforts by Obama to help get millions of unemployed people back into the labor market—and help improve his chances of getting re-elected.”

The substance of Obama’s speech, in which he implored Congress to pass the American Jobs Act, a job creation bill with a $447 billion price tag, was met with predictably mixed reactions, largely along partisan lines.

Conservative talk host Sean Hannity, in an interview with Eric Cantor on September 8, said “I don’t know what to say except ‘yawn,’ ‘repetitive,’ ‘doubling down on stupid.’ I’ll let you use your own terms here, but it sounded a lot like the stimulus proposal that he had that created no jobs.”

The speech was met more favorably by some on the left, including MSNBC’s Rachel Maddow who, in her September 8 program, called the jobs bill “Republican-friendly but still rather bold.”

Other accountes reactions characterized Obama’s delivery as spirited and galvanizing for his political base. “The president spoke with a renewed sense of urgency,” reported the Washington Post on Sept. 9, and noted his “strong rhetoric and explicit challenge to Republicans.”

Many news reports, however, suggested that American voters are still skeptical that Washington will be able to do anything to truly jumpstart the economy any time soon. 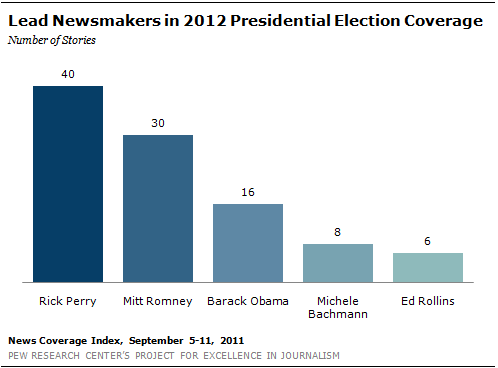 Much of the 15% devoted to the campaign last week revolved around the September 7 Republican debate held in Florida.

The media made note of the liveliness of the debate, including the New York Times on Sept. 8: “The fight for the Republican presidential nomination began narrowing into an intense and ideological battle at a debate here Wednesday night.”

In a September 8 Washington Post story—whose headline was revealing in its selectivity (“Rick Perry, Mitt Romney square off in Republican presidential debate”) —Minnesota. Rep. Michele Bachmann was cast as the loser of the encounter. “Any momentum that Rep. Michele Bachmann (Minn.), who won the Iowa straw poll in August, may have had from that victory has been extinguished by Perry.”

MSNBC’s Chris Matthews articulated the same sentiment in a post-debate analysis on September 7: “Bachmann is fading, if not falling.”

The No. 3 story last week was a collection of news items broadly related to the 10th anniversary of the September 11 attacks and terrorism. Much of the coverage featured the September 8 report that U.S. officials were tracking what was characterized as a credible threat of a possible al Qaeda car bomb attack in Washington, DC, or New York. Other stories highlighted newly uncovered video footage of Flight 93 after it crashed in a Shanksville, Pennsylvania field.

At No. 4, a closely related story was the coverage of the actual commemoration of the 9/11 anniversary itself. That included the permanent memorials and museums that have been built or were still being constructed at the various sites of the tragedy. But other reports chose to focus on individuals who were personally affected by what happened, including Tiffany Ramsaroop whose father died in the South Tower of the World Trade Center.

As a September 9 Los Angeles Times story put it: “Tiffany Ramsaroop has spent the last decade growing from a third-grader to a college freshman. Yet at every milestone there has been a hole where her dad should have been.”

Much of last week’s coverage of the No. 5 story—unrest in the Middle East—revolved around the continued hunt for Libya’s Muammar Gaddafi and his sons. The week began with reports of rebel groups surrounding the city of Bani Walid, a Gaddafi stronghold, but later reports traced his family members to Algeria and Niger.

From September 5-11, President Barack Obama was the top newsmaker, featured prominently in 16% of the stories studied by PEJ—up from 10% the week before. Obama’s prominence in the news drew from the heavy focus he received for his major speech before Congress on the state of the economy and his new jobs plan. Not since the week of May 2-8 2011, when he announced that Osama bin Laden was dead, has Obama generated that much attention. (That week he was the lead newsmaker in 17% of stories studied). 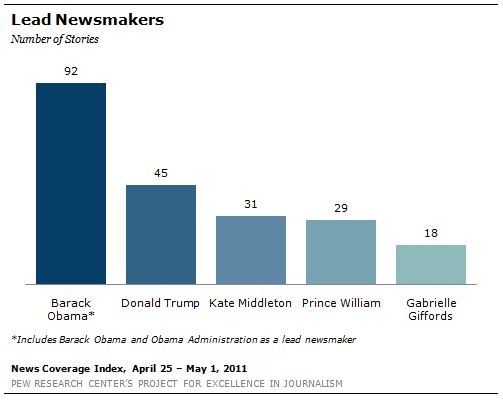 The next leading newsmakers, Rick Perry and Mitt Romney, were singled out by the media as the stars of Tuesday night’s Republican presidential debate. Perry was the No. 2 newsmaker at 5% of the stories, and Romney was No. 3 at 3%. For Perry, it was the fifth straight week of being counted among the top five newsmakers, and the single biggest week for attention so far.

At No. 4 was the Muammar Gaddafi, at 1%, the subject of numerous stories trying to follow his whereabouts.

Finally, at No. 5 (1%) was Eduardo Sencion, the gunman who killed four in a Carson City, Nevada, IHOP before turning the gun on himself.