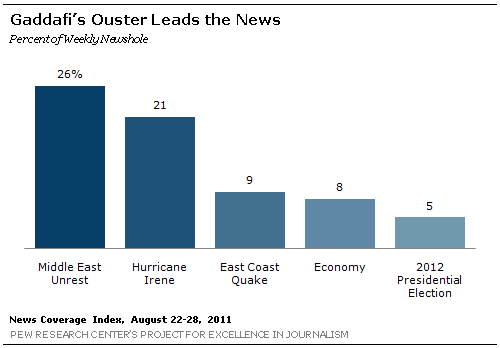 In a week in which two powerful natural disasters rocked the East coast media capitals, the rebel victory in war-torn Libya led the news.

The end of Col. Muammar Gaddafi’s 42-year grip on the North African country was the No. 1 story for the week of August 22-28, accounting for 25% of the newshole, according to the Pew Research Center’s Project for Excellence in Journalism. Unrest elsewhere in the Mideast, particularly Syria, filled another 2% of the newshole.

The extensive coverage of the takeover of Green Square in Tripoli by NATO-backed rebels came after a dramatic decrease in recent media attention to the conflict and the region. The week the U.S. and NATO forces entered the Libyan fighting (March 21-27), coverage of Mideast turmoil spiked to 47% and remained very high (38%) the following week.  But it fell to just 5% in the month leading up to the deposing  of Gaddafi.

As the week went on, however, coverage of that international story diminished as the media turned to   two potent acts of nature—Hurricane Irene and a 5.8 magnitude earthquake—both of which occurred in the greater Eastern seaboard region. Combined, those stories amounted to 30% of the newshole, more than Libya-related coverage.

Hurricane Irene, the No. 2 story last week at 21%, resulted in at least 35 deaths, flooding across the Northeast and  power outages in millions of homes. Though it struck at the end of the week, Irene generated the most weekly coverage of any hurricane since PEJ began tracking news in January 2007—the closest competitor being Hurricane Gustav (17%) from September 1-7, 2008.

The hurricane also registered as the top story on TV news, at 33% of the airtime studied on the broadcast networks and 30% on cable. (Major weather events often attract more attention from television, which is drawn to stories with a strong visual element.)  The hurricane, unusual in its Northeastern trajectory, followed an even more unusual event—an August 23 earthquake whose tremors were felt in major cities from Richmond, VA, to Boston, MA. Coverage of the quake amounted to another 9% of the newshole.

The No. 4 story last week was the U.S. economy at 8%, the lowest it has been since the week of May 2-8 (5%), when the death of Osama bin Laden completely dominated that week’s coverage. Much of the coverage was driven by anticipation of and reaction to Federal Reserve chief Ben Bernanke’s speech on the government’s response to new economic worries. Bernanke acknowledged the current problems, but said “with respect to longer-run prospects, however, my own view is more optimistic.”

Finally, at No. 5, was the presidential race, driven by a number of stories about the leading GOP candidates as they continued to jockey for position in the long lead-up to the primaries. The campaign was the subject of 5% of stories last week, a significant drop from 13% the previous week.

A Turning Point in Libya

Most of the intense fighting in Libya occurred early in the week, and about one-third of the week’s coverage occurred on Monday, August 22, as pro-democracy rebel forces, aided by NATO support,  occupied Tripoli.

In the scramble to understand the fog of war, news reports seemed to raise more questions than answers.

Early in the week, rumors emerged that Col. Gaddafi’s two sons had been captured by the rebels, only to be debunked by the surprise sighting of one son, Seif al-Islam. “al-Islam’s sudden—even surreal—arrival at a Tripoli hotel where foreign journalists are staying threw the situation in the capital into confusion,” reported usatoday.com on August 23.

TV reporters found it difficult at times to know what was happening right around them. Over sounds of gunfire on August 22, CNN’s Sara Sidner confessed, “It’s hard sometimes to tell whether or not there’s an actual major battle going on or whether or not you have a small fight with small arms fire and then celebrations going on in another part of the city.”

One question that has been repeatedly raised by the media as the so-called Arab Spring has swept through the Mideast was who and what would follow a deposed leader.  Conservative Fox News host Sean Hannity broached the subject on his August 23 program. “As a rebel victory in Libya looms, so does the prospect of a post-Gaddafi Libya, and concerns are arising tonight about what the country might look like after his fall.” Hannity chose to focus on the draft constitution of the new regime, and his concerns that the power vacuum might be filled by advocates of Sharia law.

Indeed, by the end of the week, even the whereabouts of the embattled leader was unknown.

But by Tuesday evening, one thing at least seemed clear, that the rebels had emerged from the months-long conflict victorious. Brian Williams declared on the August 23 broadcast of NBC Nightly News, “It is all over for Muammar Gaddafi.”

“I am standing in the heart of the Gaddafi compound, a place that was off-limits to all but the elite of this country” reported NBC News’ Richard Engel in a radio broadcast the same day. “It was overrun by rebels today; any question of who the victors are in the Libyan revolution has now been put to rest. They control the very heart of this country.”

Disaster Strikes by Land and by Sea

Almost one-third last week’s coverage was devoted to tracking the unusual confluence of both and earthquake and a hurricane in the Northeast.

The 5.8 magnitude earthquake, which occurred near Richmond, VA, was felt hundreds of miles away in major cities along the East coast, and beyond—some 22 states altogether.

The morning after the earthquake, August 24, the media tried to capture the sense of shock felt by East coast residents. The Washington Post’s headline read “Earthquake Jolts D.C. Area.” The CBS Early Show put it this way: “Here’s the good news—no deaths, no major damage, but there were plenty of rattled nerves.”

At least one media commentator, liberal MSNBC host Rachel Maddow, took the opportunity to draw attention to the risks nuclear energy (a nuclear power plant was located near the epicenter of the quake). “We keep getting surprised by disasters, by the markets going nuts, by a ratings agency downgrading the United States on the basis of our dumb politics and brinksmanship about our debt. Is one of these shocks, or are all of these shocks, enough to change what is possible for our country?” 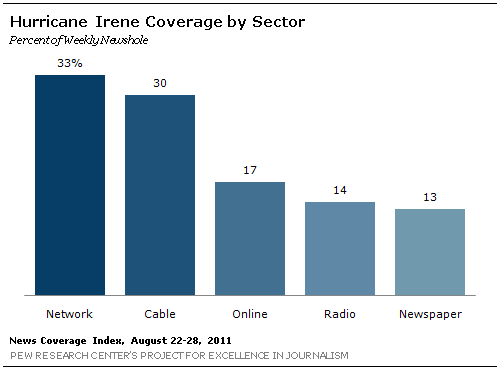 Unlike the earthquake which took everyone—including the media—by surprise, the arrival of Hurricane Irene was anticipated and feverishly monitored all week. Storm-tracking visualizations occupied prime real estate on newspaper home pages, radar images appeared on television screens, and reporters stood in the wind and rain for days. Each hour seemed to bring updated predictions about where the storm might hit and how much damage it could conceivably do.

As news organizations spent much of the week anticipating the hurricane’s trajectory, some reporters descended on the locations in the storm’s path. The Los Angeles Times depicted the calm before the storm in Roanoke Island, N.C on August 26:

“The shutters were up, pounded into place with a croquet mallet. The lawn furniture was dragged inside. The generator was full of gasoline, and the refrigerator and freezer were stuffed with steaks, ham and shrimp. John F. Wilson IV was ready for Hurricane Irene.”

Even with the extent of damage it caused, the hurricane—a Category 1 by landfall—was less fierce than many models and many in the media had predicted. And the press post-mortems quickly began. In a story headlined “A Hurricane of Hype,” the Daily Beast’s Howard Kurtz wrote that “the tsunami of hype on this story was relentless, a Category 5 performance that was driven in large measure by ratings.”

Much of last week’s economy coverage—the No. 4 story—was related to Federal Reserve chief Ben Bernanke’s speech from Jackson Hole, Wyoming, on August 26. News reports tracked the ups and downs of the stock market on hopes of a possible stimulus—a measure that Bernanke chose not to implement in the short term.

After several weeks of substantial coverage, attention to the No. 5 story, the presidential campaign, plunged last week as no single candidate or theme dominated. Some outlets highlighted Republican Congressman Paul Ryan’s decision not to enter the fray. Others tracked the rise of Texas Governor Rick Perry in the polls as he took a commanding lead in a Gallup survey, placing him more than 10 points over the previous frontrunner, former Massachusetts governor Mitt Romney. 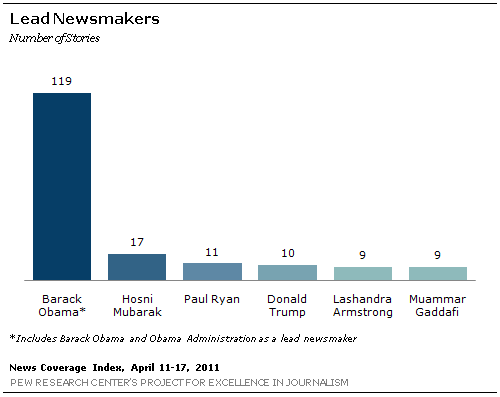 From August 22-28, for the first time in three months, the ousted Libyan leader Col. Muammar Gaddafi registered as the No. 1 newsmaker, appearing prominently in 7% of stories, many of them questioning his whereabouts. (To register as a dominant newsmaker, someone must be featured in at least 50% of a story.)

At No. 2 was President Barack Obama (4%). The president spent much of the week vacationing on Martha’s Vineyard, but the barrage of big breaking news events compelled him to stay in the spotlight, issuing statements on Libya and advising U.S. citizens to heed evacuation orders in preparation of Hurricane Irene. In the previous week, Obama was the dominant newsmaker in 15% of stories—almost four times as much as last week.

The famously private CEO of Apple, Steve Jobs, became the subject of numerous stories when he announced on August 24 he could no longer perform his duties at the helm of one of the most powerful technology companies in the world, and would step down. Though no direct reason was given, much of the coverage discussed the announcement in light of Jobs’ health problems in recent years. He was the No. 3 newsmaker last week, appearing prominently in 2% of stories.

Former leader of the IMF Dominique Strauss-Kahn made headlines early in the week when, in a 12-minute hearing on August 23, the rape charges against him were dismissed. Strauss-Kahn was the lead newsmaker in 2% of stories.

Finally, at No. 5, was Texas Governor Rick Perry, who pulled ahead of all other Republican rivals for the GOP presidential nomination last week in a Gallup poll. Perry was featured prominently in 2% of all the stories studied by PEJ.