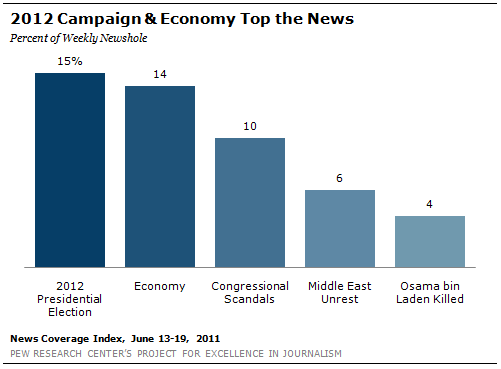 The 2012 presidential campaign generated its highest level of coverage to date as a large cast of GOP candidates squared off in New Hampshire last week.

The race for the White House led the news agenda, accounting for 15% of the newshole from June 13-19, according to the Pew Research Center’s Project for Excellence in Journalism. That was nearly double the coverage (8%) one week earlier and topped the previous high of 12% (May 30-June 5) when former Massachusetts governor Mitt Romney entered the race and former Alaska governor Sarah Palin embarked on a highly publicized bus tour.

Last week’s debate at Saint Anselm College in Manchester, New Hampshire was not the first of this election cycle, but in some ways, the media treated it like it was. Last month’s kickoff debate in South Carolina was attended by mostly long-shot candidates, and was overwhelmed by the avalanche of media attention to the death of Osama bin Laden which had occurred just four days earlier. That week (May 2-8), the campaign accounted for just 3% of the newshole.

This time around, the stars of the media narrative seemed to be Romney, a leading contender for the nomination, and Minnesota Congresswoman Michele Bachmann, who used the debate to formally announce her candidacy. Both Romney and Bachmann were declared the winners of the debate in many press post-mortems. Former Minnesota governor Tim Pawlenty, however, was not so fortunate.

But the focus of the event—and coverage of it—was Barack Obama, whose health care overhaul and economic policies became the primary target  for a slate of contenders more concerned at this early stage with establishing familiarity with voters rather than attacking each other.

Lately, there has been enough bad news on the economic front to help provide ammunition for those GOP attacks. And last week, the gloomy news again seemed to exceed the good tidings. Overall, attention to jobs, the foreign and domestic debt crises and other woes accounted for 14% of the coverage, making the economy the No. 2 story.

These two intertwined subjects—the presidential campaign and the economy—have accounted for a quarter  of the mainstream news agenda in the past four weeks—with the economy ranking No. 1 at 14%, and the campaign coming next at 11%.

Embattled New York Rep. Anthony Weiner stayed in the news as he gave in to mounting pressure and announced his resignation on June 16 following several weeks of unwelcome attention to his sexual behavior online. It was the No. 3 story at 10% of the newshole last week—still a drop-off from 17% the previous week.

At No. 4 last week was unrest in the Middle East (6%), dominated by coverage of the continuing violence in Libya and Syria. News outlets turned to the congressional debate over the legality of a continued U.S. military role in Libya, while government crackdowns in Syria caused massive refugee resettlements in nearby Turkey.

A return to the topic of global terrorism in the wake of Osama bin Laden accounted for 4% of the newshole, making it the No. 5 story for the week. Two events drove that coverage—the ascension of Ayman al Zawahiri as the new leader of al Qaeda, and Pakistan’s arrest of five informants who had helped lead U.S. forces to bin Laden.

And by far the most coverage of the election last week came from the cable news sector—30% of the airtime studied. Some of the coverage, inevitably, anointed winners and losers.

A National Journal analysis on June 14, suggested that Romney had succeeded by emerging unscathed. “Mitt Romney easily survived his first debate of the 2012 primary with barely a nick to his early frontrunner status.”

“By the end of the debate, the most obvious beneficiaries were Romney and Minnesota Rep. Michele Bachmann, the “tea party” favorite who used the debate to announce her official entrance into the presidential race and to get off several zingers that roused the crowd,” stated a Los Angeles Times article from the same day.

A June 15 USA Today article, titled “Debate showing elevates Bachmann to higher tier,” sung her praises, calling her “lively, confident and personable….She emerged from the pack in a way that is likely to make it easier for her to raise money, attract grass-roots support—and even emerge as a Tea Party favorite to rival Sarah Palin,” stated the story.

Former Minnesota governor Tim Pawlenty chose not to attack Romney in the debate when asked about his earlier coinage of the term “Obamneycare” to refer to the similarities between the health care plans enacted by the former Massachusetts governor and President Obama. That struck some pundits as weak.

“During Monday night’s Republican debate in New Hampshire, Governor Pawlenty had the opportunity to repeat that line but he declined. And some are suggesting that he missed an opportunity to go after the GOP frontrunner,” said Sean Hannity on his Fox News program.

But perhaps the key element of the post-debate analysis was the observation that what united the seven candidates on stage was displeasure with President Obama.

“The Republican debate was largely about one thing: the leadership of Barack Obama,” narrated CBS’ Jan Crawford on the Early Show, June 14.

An NPR report on the same morning echoed that observation: “The seven leading Republican presidential contenders have used their first major debate to level a strong critical assault on the policies of President Obama, in particular, his handling of the U.S. economy.”

Obama did some traveling and campaigning of his own last week, although he was seemingly unable to shake the media’s focus on the president’s critics. CNN’s John King—who moderated the New Hampshire debate—reported on the annual gathering of the Netroots contingent of liberal activists and summarized the challenge faced by Obama, even among his base.

“The stakes here are enormous,” King said. “The struggling economy guarantees a competitive 2012 presidential race. And the president needs to reinvigorate his grassroots support.”

The economy was the top story last week in three different sectors, radio (22%), newspapers (20%) and online (12%). And for the second week in a row, economic coverage was the sum of a number of disparate storylines. The largest portion of coverage, about a quarter, focused on the job market as Barack Obama visited North Carolina to talk about job creation.

A number of stories highlighted some encouraging news about a drop in jobless reports. But for every one of those there was another story about a drop in retail sales and the possible impact of the Greek debt crisis on the U.S. stock market.

After three weeks of substantial and sometimes intense media coverage, embattled New York Rep. Anthony Weiner resigned from Congress on June 16. The resignation—held at a Brooklyn senior center—was carnival-like as Weiner spoke for four minutes to a crowd of reporters amidst a chorus of boos, cheers and at least one heckler whose crass jeers at times made Weiner inaudible. The spectacle accounted for 10% of last week’s coverage.

The NATO military operation in Libya presented political complications for the Obama administration last week. Most of the Libya coverage followed congressional pushback against what some members—on both sides of the aisle—called an illegal war. The other significant aspect of last week’s Mideast coverage was the escalation of violent crackdowns in Syria, forcing evacuations and putting even more pressure—particularly from the U.S.—on that country’s president to reform.

Together, these events accounted for 6% of the newshole last week—down from 11% the week before, and a long way from the 47% dedicated to the region during the week of March 21-27 when the U.S. and NATO entered the conflict in Libya.

Nearly seven weeks after the death of the world’s most wanted terrorism suspect, Osama bin Laden was in the news again as the media learned that his deputy Ayman al Zawahiri’s would succeed bin Laden as the top al Qaeda leader. In the same week, the Pakistani government arrested five informants who had helped the U.S. find bin Laden, which reporters interpreted as a deepening of the tensions in American-Pakistani relations. These two events combined drove coverage of bin Laden-related news to 4% of the newshole last week.

For a second week in a row, Anthony Weiner was, to his likely dismay, the top overall newsmaker. During the week of June 13-19, he was a dominant figure in 9% of the week’s stories. (To register as a dominant newsmaker, someone must be featured in at least 50% of a story.) Even so, that was down somewhat from 13% the week before, when the scandal involving revelations about lewd pictures he had sent to women on Twitter brought the uproar to a fever pitch. 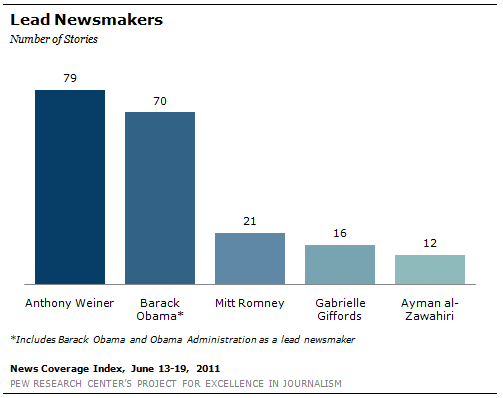 The focus on Weiner was enough to edge out the coverage of Barack Obama, the No. 2 newsmaker last week, featured prominently in 8% of stories. Much of that coverage was focused on the presidential campaign in which the president and his policies were the focus of GOP attacks.

At No. 3 last week was the apparent Republican frontrunner, Mitt Romney (2%). The near universal media verdict on his performance in New Hampshire was that he made it through the night having done himself no harm.

Also a lead newsmaker in 2% of stories last week was Gabrielle Giffords, the Arizona congresswoman who finally left hospital treatment after being shot at point blank range by a gunman on January 8.

Finally, at No. 5 was Ayman al-Zawahiri (1% of stories), the longtime deputy leader of al Qaeda who was promoted as the successor of Osama bin Laden.

Obama, Huckabee, and a Feisty Philly Face Off