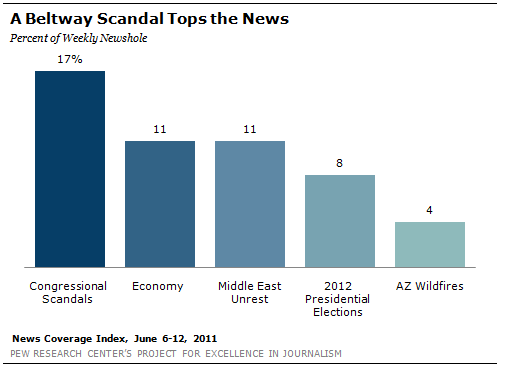 scandal that launched 1,000 puns—Rep. Anthony Weiner’s exchange of explicit messages and images with a number of women—topped the news last week, registering as one of the biggest political scandal stories of the past four years.

From June 6-12, the saga accounted for 17% of the newshole measured by the News Coverage Index of the Pew Research Center’s Project for Excellence in Journalism.

The biggest political scandal of the last four and a half years was former Illinois Governor Rod Blagojevich’s corruption case (28%)—also known as “Blago-gate”—in which he allegedly tried to sell President Barack Obama’s former senate seat. No 2 was former New York Governor Eliot Spitzer’s admission that he used prostitutes (23%), followed quickly by his resignation from that office.  News of former Idaho Senator Larry Craig’s arrest for lewd behavior in an airport was the No. 3 scandal, at 18%. Craig ultimately pled guilty to lesser charges.

For the week, Weiner was easily the dominant newsmaker, appearing prominently in 13% of the week’s stories studied by PEJ—nearly tripling the coverage devoted to President Obama (5%).

The week’s No. 2 story was the economy (11% of the newshole) although coverage slipped markedly from the previous week (19%) when gloomy reports about the jobs and housing markets fueled the news.  Last week, a mix of storylines contributed to the economic narrative.

The economy was followed closely by the continuing upheaval in the Mideast (11%). A big part of the story last week was the chaos in both Syria and Yemen, including reports that U.S. has become increasingly involved, targeting airstrikes at militants in the latter country.

Coverage of the presidential campaign dropped last week, filling 8% of the newshole compared with 12% the previous week. Last week’s coverage included former Pennsylvania Senator Rick Santorum’s entry into the GOP field and the mass defections of staffers from Newt Gingrich’s troubled campaign. A related story—the release of about 24,000 pages of Sarah Palin emails from her time as Alaska governor—filled another 3%.

The No. 5 subject, at 4%, were the raging Arizona wildfires that consumed an estimated half million acres in the eastern part of the state. The blazes were the latest in a series of natural and weather disasters that have proved to be major newsmakers in 2011.

Last week saw a significant increase in coverage of a story that emerged a week earlier. The initial reports of an illicit photo, which Weiner claimed must have been sent by a hacker, generated significant coverage, ranking as the fifth-biggest story (accounting for 4% of the coverage) from May 30-June 5.

Yet news of a hacker embarrassing a congressman wasn’t nearly as big a news story as a congressman embarrassing himself. Last week’s dramatic turns in the narrative started with a teary June 6 press conference at which Weiner admitted to inappropriate contacts with a half dozen woman and acknowledged lying to the media. That was followed by a cascade of damning news, including the surfacing of X-rated photos of the New York Democrat and a growing chorus of calls for his resignation. By week’s end, the congressman announced he would be taking a leave of absence and seeking treatment for his problem.

There was a prurient paparazzi component to last week’s coverage as well. News outlets apparently could not resist relying on double entendres to describe the episode and some of the coverage had an inevitably giggling quality to it. Cameras swarmed around the congressman as he ran routine errands in New York over the weekend. And to some degree, the scandal was politicized, particularly on the cable sector which devoted the most coverage (about one-third of its airtime) to the story last week.  At the same time, however, there were enough newsworthy developments and genuine plot twists to keep the media’s attention.

The essence of that pivotal June 6  press conference was summed up that day by CNN”s Anderson Cooper, who described  it as “one of the nation’s most influential and outspoken Democratic lawmakers, tearfully admitting he lied about tweeting a lewd photo of himself and more, saying it’s part of a pattern.”

“This is not going away,” added Cooper.

That proved an understatement. 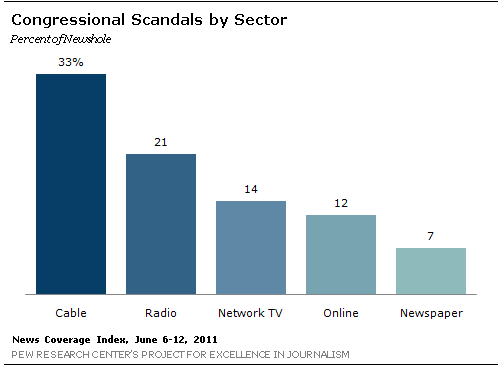 Some of CNN’s early coverage, like that of other media outlets, focused on the fact that Weiner had lied to the press in earlier interviews where he raised the possibility that he had been victimized by online hackers.

Coverage quickly expanded to include Weiner’s new wife, Huma Abedin, who is an aide to Hillary Clinton and who was not at her husband’s press conference. The Clinton connection offered the press a chance for allusions to other scandals. An ABC story noted that Abedin’s boss, “Hillary Clinton weathered the same humiliation when her husband was unfaithful with a White House intern, yet chose to stand by her man.”

Shortly after that, came reports that Abedin was pregnant.

On June 7, ABC’s Good Morning America aired an interview with one of the women who Weiner had communicated with—26-year-old Megan Broussard. She described how her online exchanges with Weiner quickly turned into him sending explicit images. “I don’t think he’s a bad guy,” she observed. “I think he has issues—just like everybody else.” ABC News became part of the story itself when it subsequently was reported that it had paid Broussard for photos sent by Weiner.

The next shoe to drop was news of dwindling support for Weiner, particularly among fellow Democrats. The June 8 Washington Post reported that his “political  survival was in question…as the leaders of his own party continued to distance themselves from the disgraced New York lawmaker…Rep. Steve Israel (N.Y.), the chairman of the Democratic Congressional Campaign Committee, issued a statement indicating that his caucus has no appetite for defending Weiner.”

Given Weiner’s role as a high-profile and combative liberal who frequently made the talk show rounds, it was perhaps inevitable that the scandal would provide yet another partisan battleground for the cable hosts.

On June 8, liberal MSNBC host Rachel Maddow accused Republicans of hypocrisy in calling for Weiner’s resignation when they hadn’t done so in the case of David Vitter, the Republican Senator from Louisiana who admitted to using prostitutes.

“If Anthony Weiner must resign from Congress, why mustn’t David Vitter?” she asked.   “Seriously.  It is not a hypothetical question.”

From the other side of the spectrum, conservative Fox News host Sean Hannity, on his June 10 program, criticized Democrats for not being quick enough to call for Weiner’s resignation.

News of the U.S. economy last week (11%) was divided into several key storylines. Congress rolled back the fees banks can charge when consumers swipe a debit card. There was more coverage of the debt ceiling impasse and President Obama addressed the latest batch of bad news on the employment front. With the exception of the week of May 30-June 5 when coverage reached 19%, the subject has regularly registered near the 10% mark in recent weeks.

The unrest in the Mideast (11%) was up modestly from the previous week (9%) and generated the most coverage in the newspaper sector (15%). One storyline was the continuing violence and harsh government crackdown in Syria. Another was the upheaval in Yemen, particularly after President Ali Abdullah Saleh left for Saudi Arabia where he is being treated for serious injuries after an attack on his palace.

Coverage of the presidential race last week (8%) focused on the faltering campaign of Newt Gingrich and Rick Santorum’s entry into the contest. Those events however, did not generate as much attention as Mitt Romney’s presidential announcement and Sarah Palin’s media-drenched bus tour one week earlier. Indeed, Palin’s ability to generate media buzz—for better or worse—was illustrated last week by the coverage of the batch of emails released on June 10.

The No. 5 story was Arizona wildfires (4%). And for much of the week, the narrative focused on the problems firefighters were facing while trying to contain the massive inferno. 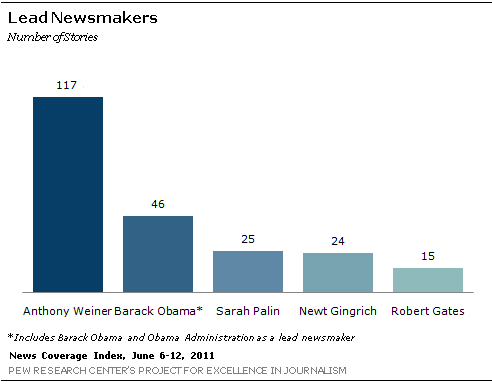 Anthony Weiner was easily the top newsmaker from June 6-12. He was a dominant figure in 13% of the week’s stories.  (To register as a dominant newsmaker, someone must be featured in at least 50% of a story.) That easily topped the No. 2 newsmaker, Barack Obama, at 5%.

Next on the list were two prominent Republicans. Sarah Palin (3%) made the list of top five newsmakers for the third straight week. Newt Gingrich, facing a mutiny by at least 16 campaign staffers who quit and more questions about his discipline as a candidate, was No. 4, also at 3%.

The No. 5 newsmaker was outgoing Defense Secretary Robert Gates (2%) who made news last week by warning NATO members that their cutbacks in defense expenditures were harming the alliance.