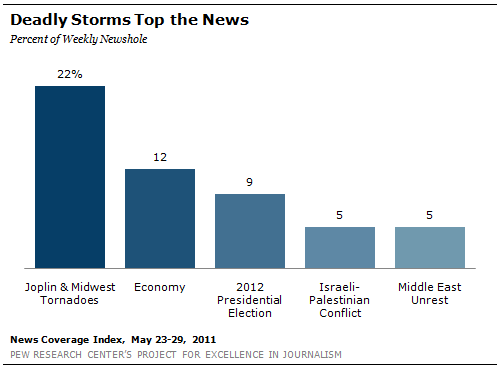 A storm system that spawned the deadliest tornado in decades, killing more than 100 residents of Joplin Missouri, last week registered as thebiggest weather story since the Pew Research Center’s Project for Excellence in Journalism began monitoring the press.

From May 23-May 29, the Midwest tornado and subsequent storms accounted for 22% of the newshole as measured by PEJ’s weekly News Coverage Index. Previously the biggest weather week since PEJ began tracking news in January 2007 was September 1-7, 2008, when Hurricanes Hanna and Gustav combined to fill 20% of the newshole.

Last week’s scenes of death and destruction were primarily conveyed to U.S. citizens on television news. The story accounted for nearly one-half (46%) of the network news airtime studied last week; it filled more than one-third (38%) on cable news.

In a year of dramatic newsmaking events at home and abroad, the spring of 2011 has been marked by a series of violent storms ravaging the Midwest and South.  Indeed, this makes the fifth time in the past seven weeks that destructive weather has finished among the top five stories.

If weather led the news, politics played a central role in the second and third biggest stories last week. The economy was the No. 2 story, filling 12% of the newshole studied, and much of that coverage focused on a Democratic victory in a special congressional election in western New York widely viewed as a referendum on Republican budget priorities, particularly the party’s plans for reforming Medicare.

The No. 3 story (9%) was the 2012 presidential election season, fueled in good measure by news about two former GOP governors. One, Tim Pawlenty, made news by entering the race. Another, Sarah Palin, created buzz by buying a home in Arizona and launching a bus tour—heightening speculation that she too might join the Republican field. For the week, Palin, with her knack for attracting press attention, finished as the fourth biggest newsmaker.

After getting off to a somewhat slow news start in 2011—particularly when compared to the presidential campaign four years earlier—coverage of next year’s election has recently picked up significant momentum. In the past six weeks, the campaign has filled 8% of the newshole, behind only the death of bin Laden (17%) and the economy (10%).

The fourth and fifth biggest stories of last week were about the Middle East.  The conflict between the Israelis and Palestinians was the No. 4 story, at 5% of the newshole. And the continuing violence and unrest in the Arab world (No. 5) also filled 5% of the newshole, as NATO forces intensified airstrikes in Libya.

Television’s visceral power to convey the magnitude and scope of a disaster like the one that struck Joplin was on full display last week. While the story was the top news event in four of the five media sectors studied by PEJ, the level of coverage online (12%) and in newspapers (11%) was a fraction of what network and cable news devoted to the storm—a sign that to at least some degree, the medium influences the message.

One day after the tornado struck, ABC anchor Diane Sawyer began the May 23 newscast by walking through piles of rubble in stricken Joplin, with the network’s special report labeled, “Direct Hit: An American Tragedy in Joplin.”

Later in the broadcast, viewers saw a chilling homemade video of the approaching twister as an unidentified voice declared, “There it is, there it is. Oh gosh, that is a monster tornado.” The sky then darkened ominously until the picture turned completely black amid the haunting sounds of people screaming.

Like any disaster of this scale, the event quickly spawned a number of storylines. One was the search for survivors and the quick pivot toward eventual recovery. Speaking on the May 24 edition of the NBC Today show, Joplin Mayor Mike Woolston, acknowledged that, “We don’t really have an idea how many [people] are unaccounted for.” But he vowed that “as difficult as it is, you just take one day at a time. And we will recover and we will rebuild.”

The next day on CNN, John King was documenting one family’s tragedy and growing frustration in trying to confirm the death of their 12-year-old son.

“A neighbor told them he saw the body and he told them their son is dead [and] that he stood over the body and waited until an ambulance took it away,” King stated. “But they desperately want to get to the morgue….Three days in a row, they have tried to get down in the morgue, and they have been told they can’t do that. So they tried to bring us inside today, hoping that maybe some media attention would help them.” 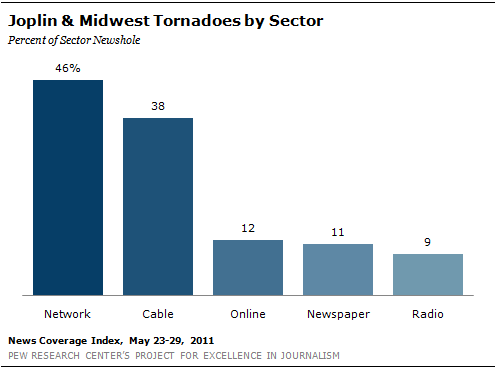 And some stories, such as this Associated Press account late in the week, focused on the disaster’s grim statistics:  “The death toll from the massive tornado that devastated Joplin, Mo., reached 132 Friday, a city spokeswoman said…All of the numbers describing Sunday’s storm are nothing short of numbing. The tornado—an EF5 monster packing 200 mph winds—was the nation’s deadliest single twister in more than six decades. More than 900 people were injured.”

Last week’s coverage reinforced the sense that this has been a season of unusually violent and headline-generating storms.  During the week of April 25-May 1, a string of tornadoes that reportedly killed more than 300 people, striking Alabama the hardest, was the No. 1 story at 15% of the newshole.

Some media reports suggests that this spring’s particularly volatile weather may be related to a number of factors—ranging from a strong La Nina pattern to warm air lingering in the Arctic to a generally warming planet.

News of the economy was the No. 1 story last week in radio (19%), and it was an election result that triggered much of last week’s coverage. Democrat Kathy Hochul’s congressional win over Republican Jane Corwin in a GOP leaning district in New York was interpreted largely through the prism of the two party’s divergent plans for tackling the deficit—particularly as it applied to Medicare.

“After their plan to privatize Medicare helped a Democrat win a vacant New York congressional seat, House Republicans are vowing to prevent the 2012 election from becoming a referendum on the proposal,” stated a Bloomberg News story posted on Google News.  “Democrat Kathy Hochul scored an upset in a traditionally Republican western New York district May 24 after hammering opponent Jane Corwin for endorsing the Medicare plan approved by almost all House Republicans…In a March 4-7 Bloomberg National Poll, a Medicare voucher plan was opposed by 54 percent of respondents compared with 40 percent supporting it.”

The 2012 presidential campaign also generated the most attention last week in the two media sectors featuring the ideological talk shows, cable news (15%) and radio (14%).  Former Minnesota Governor Tim Pawlenty, a man some in the media have dubbed as charismatically challenged, made news by announcing his entry into the GOP field on May 23. But by week’s end, signs that Sarah Palin might be considering a run began attracting the political press corps.

A May 26 Wall Street Journal story reported that Palin “bought a roughly 8,000-square-foot home in North Scottsdale, Ariz., for $1.695 million,” characterizing that as one of a “series of recent moves” that “have amped up speculation…that she is preparing for a White House bid.” The story also noted that Palin had recently rehired to two aides and that a full length feature film focused on her career as Alaska governor was close to completion.

As Palin proved last week, the mere possibility that she might run for the White House is enough to generate significant media interest.

The Israeli-Palestinian situation fell by more than half from the attention received from the week before, but it remained one of the top stories. The seemingly intractable dispute accounted for 5% of the newshole from May 23-29, down from 11% the previous week when coverage was driven by President Obama’s speech on the subject. Last week, the big newsmaker was Israeli Prime Minister Benjamin Netanyahu’s well-received speech to Congress, one that suggested some differences between the U.S. and Israeli administrations on how to advance the peace process.

The continuing fighting in Libya was one of the main storylines in the ongoing Mideast turmoil coverage (5%). But some of that news also focused on a significant event in Egypt, the decision to charge former President Hosni Mubarak for killing protestors during the upheaval in that country earlier in the year. 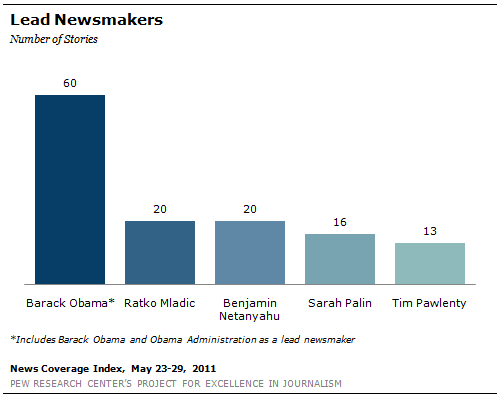 The next leading newsmakers (at 2%) were Israeli Prime Minister Benjamin Netanyahu and Ratko Mladic, the former Serbian general arrested and charged last week in connection with war crimes and atrocities.

The fourth leading newsmaker was Sarah Palin (2%) followed closely at 1% by Tim Pawlenty and Jared Loughner, the man charged in the Tucson shooting spree who was found incompetent to stand trial last week.

Nature, Crime, and Politics Challenge Iraq in the News