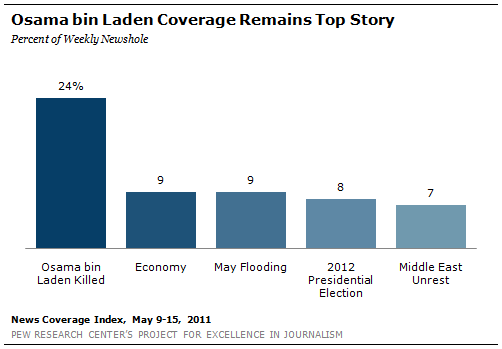 The death of Osama bin Laden continued to dominate the news last week, but the narrative finally began to shift from dissecting the May 1 raid to more controversial topics, such as politics and Pakistan.

From May 9-15, the bin Laden saga filled 24% of the newshole, according to the Pew Research Center’s Project for Excellence in Journalism. That represents a drop off of nearly two thirds from the previous week (69%), as measured by PEJ’s weekly News Coverage Index, but it was still nearly triple the attention to any other story.

A week earlier, the bin Laden story was the biggest ever measured in a single week by PEJ, since it began this research in January 2007.

The bin Laden saga generated the most coverage last week on cable news—41% of the airtime studied. But there were dramatic differences among the three major channels. While CNN devoted about two-thirds of its airtime (65%) to the subject, that dropped to about one-third (35%) on MSNBC. Fox meanwhile, devoted only one-fifth of its newshole (20%) to bin Laden.

Our data from the last few years reveals that cable news, particularly MSNBC and Fox, tends to focus on topics about which there is more inherent ideological divide.

Aside from the drop in overall coverage, there were significant changes in how the story was covered last week. The story line that had stood out above all others the first week after the raid, reconstructing what happened at bin Laden’s compound in Abbottabad Pakistan, accounted for less than 10% of the coverage after representing more than one-third the week before.

Now, in week two following the raid, several other bin Laden-related themes began to take over the media narrative from May 9-15.

One was the implication of bin Laden’s killing on worldwide terrorism, which accounted for 23% of the overall coverage. Another was the growing politicization of the story as partisans sparred over whether George Bush or Barack Obama deserved credit for the mission. After filling 15% the first week, it grew to 21% last week.

The third growing story line was Pakistan, with an emerging media portrait of the country as an unreliable, or perhaps even duplicitous, U.S. ally. It also accounted for 21% of the bin Laden coverage.

The bin Laden story continued to dwarf the economy and other news, but some of these other subjects were beginning to come back. The week’s No. 2 story, at 9%, was the U.S. economy, with House Speaker John Boehner getting attention by declaring that Republicans would not agree to raise the debt ceiling without major spending cuts. A related subject, gas prices, accounted for another 4% as energy executives appeared before Congress last week amid calls to end oil company tax breaks.

Next, also at 9%, was a natural disaster—the Mississippi River flooding threatening Southern communities, most notably Memphis Tennessee. Only two weeks earlier, another such disaster, the tornadoes that ripped through the Southeast, was the top story at 15% of the newshole.

The fourth-biggest story (8%) was the 2012 presidential race, as Newt Gingrich and Ron Paul entered the GOP fray and Mike Huckabee opted out of another run. That was followed, at 7%, by the continued turmoil in the Mideast, where violence in Syria and Libya generated the most attention. This represents a major drop off, however. In the first three months of 2011, the Mideast unrest filled 25% of the coverage studied by PEJ’s News Coverage Index.

At its core, the political debate was between those wanting to credit George Bush’s emphasis on harsher interrogation techniques for developing the intelligence that led the killing of the al Qaeda leader and those offering kudos to Barack Obama and his approach. The talk show proxy for that debate seemed to be an argument over torture.

On his May 9 show, conservative Fox News host Sean Hannity, said that “without enhanced interrogation, without rendition, without black sites, this day would not have been possible. So if we want more successful days like this, we must argue that the Obama policies were wrong and the Bush policies were right.”

On liberal talker Ed Schultz’s May 12 MSNBC program, legal commentator Jonathan Turley attacked the policy of torture. “You know…I think much of the world is shocked by the debate that we‘re having,” he said. “This whole question of did it yield useable intelligence has long been rejected by the world and by the United States in treaties as a viable argument for torture.”

But for the two principals who were the subject of the debate, there was no rancor or finger pointing last week. ABC News quoted Bush as saying he learned of bin Laden’s death during a phone call from Obama while at a restaurant and told his successor, “good call.”

If who deserved political credit was a major storyline, a more worrisome narrative was just as big: the role of Pakistan and its relationship with the U.S. in the aftermath of the bin Laden raid. What emerged in that coverage was a picture of growing tension and maybe even animosity between the two countries.

On March 9, an AP story reported on an event that was viewed by many as apparent retaliation by Pakistan against the U.S. for conducting the raid on its soil without prior notification. “Pakistani media have reported what they say is the name of the CIA station chief in Islamabad—the second such potential outing of a sensitive covert operative in six months, and one that comes with tensions running high over the U.S. raid in Pakistan that killed al-Qaida chief Osama bin Laden,” the story stated. 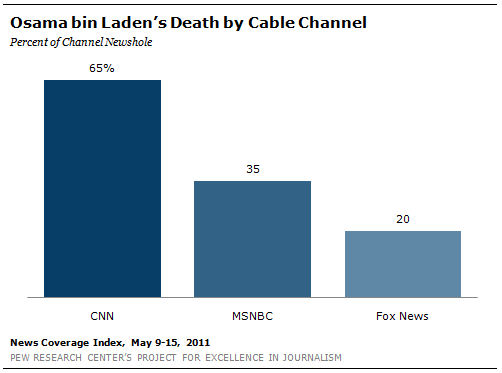 That same night, Fox News anchor Shepard Smith told viewers about an angry speech delivered in Pakistan and aimed at the U.S. “In the wake of that raid that killed Osama bin Laden, Pakistan’s prime minister today delivered up a doozy…a warning for the United States—‘don’t do that again,’” Smith said. “The prime minister talked tough in front of his own parliament.”

At the same time, a New York Times story revealed the depth of U.S. mistrust toward Pakistan: “President Obama insisted that the assault force hunting down Osama bin Laden last week be large enough to fight its way out of Pakistan if confronted by hostile local police officers and troops, senior administration and military officials said Monday. The planning also illustrates how little the administration trusted the Pakistanis as they set up their operation. They also rejected a proposal to bring the Pakistanis in on the mission.”

The third major thread last week, closely related, involved the impact on bin Laden’s death on the future of terrorism, and here, some of the speculation centered on who would succeed him. On the May 10 edition of CNN’s Situation Room, the focus was on al Qaeda’s No. 2 man, Ayman al-Zawahiri.

“Can [al-Zawahiri] pick up the pieces? I think he can because he’s a very talented man,” asserted Middle East analyst Fouad Ajami. “He’s a very dangerous man. And to the extent that we have a public enemy number one, it used to be Osama bin Laden. We have to take Ayman Zawahiri seriously.”

But it remains to be seen if any bin Laden successor can match his notoriety and ability to command the attention of the public and media. From May 9-15, bin Laden was tied as the No. 1  headline generator, appearing as a dominant newsmaker in 8% of the week’s overall stories—as much coverage as the U.S. President who approved the mission that killed him.

Coverage of the U.S. economy has certainly been diminished by the bin Laden story, but it jumped last week, up to 9% from 5% the previous week as concerns about the debt and deficit accounted for about 40% of the economic narrative. And it finished as the No. 1 topic (14% of the front-page newshole) in the media sector that traditionally gives it the most attention—newspapers.

Right behind the economy last week was the Mississippi River flooding, also 9%, which proved to be the No. 1 story (19% of the airtime studied) in the sector that traditionally devotes the most attention to weather related disasters—network news. By the end of the week, the media were reporting on efforts to keep the dangerous floodwaters away from the population centers of Louisiana.

The fourth biggest story (at 8%) was the 2012 presidential campaign, which matched its high water mark for coverage so far in 2011. The difference is in that week (April 18-24), campaign coverage was fueled by the sudden emergence of real estate mogul and reality TV star Donald Trump, who this week announced he would not be running. Last week, however, former House Speaker Newt Gingrich’s entry into the race represented the big news.

The continued violence in the Middle East was next, at 7%, and this marks the second consecutive week in which coverage has fallen into single digits—suggesting a story that dominated the first quarter of 2011 has moved well down the media radar screen. The Libyan civil war narrative seems to seesaw between gains for the rebel forces and gains for Muammar Gaddafi’s loyalists. Last week, the story was about military victories for the rebels and there were even some reports questioning whether Gaddafi was wounded, perhaps fatally so.

Most of the other top newsmakers were Republican politicians who made news for a variety of reasons. The No. 3 newsmaker was Newt Gingrich (2%), who threw his hat into the ring in the presidential race. He was followed by former Nevada Senator John Ensign (also 2%), who resigned his post after being entangled in a scandal involving an affair with the wife of a top aide. Last week, the Senate Ethics Committee concluded that Ensign might have been guilty of violating the law.

The fifth biggest newsmaker (1% of the stories) was Texas Congressman and libertarian Ron Paul, a 2008 GOP presidential candidate who announced he would try again in 2012.

How the Media Have Covered bin Laden’s Death