The drama of an averted government shutdown transformed the media narrative last week into an epic contest of competing ideas about federal spending. 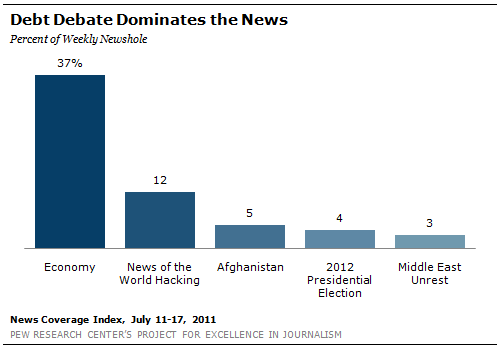 For a second week in a row, domestic economic issues dominated the media’s attention, after months of the press focused on events abroad. The economy accounted for 39% of the newshole studied by the Pew Research Center’s Project for Excellence in Journalism during the week of April 11-17. It also marked the first time in 2011 that the economy held the top spot for at least two weeks straight.

Hardly dipping from the previous week’s level of 40%, news about the economy was the top story in all media sectors studied, from cable TV to the Internet. And the particularly high level of coverage in cable (53%) and radio (52%), two politics-heavy platforms, indicated just how politically loaded the debate about federal spending was.

Much of the coverage consisted of analysis of the speech Wednesday by President Obama, one that based on listening to many press accounts renewed support for the President among much of his liberal base. Obama was also the dominant newsmaker in 13% of stories—double that of the previous week—a bigger share than any week since January 24-30, when Obama gave the State of the Union. (To be a dominant newsmaker, someone must be featured in at least 50% of a story.)

The jockeying for message control between an Obama-led rally to protect entitlement programs versus a Republican attempt to privatize them underscored the key subtext of last week’s federal spending debate—the 2012 presidential election.

The week was also marked by another sign that the media are gearing up for the campaign—rumors about Obama’s national origin resurfaced, this time from tycoon Donald Trump, a potential GOP contender for the presidential nomination. These questions made up much of the coverage that focused on the Obama administration, a topic that accounted for another 4% of the newshole.

The two foreign crises that only a few weeks ago had monopolized the public’s and the media’s attention continued to receive coverage, but not even an elevated disaster rating level in Japan nor news of Col. Muammar Qaddafi cluster-bombing civilians were able to drive coverage of these two troubled places any higher than the previous week.

A Defining Week for Obama

Fresh off of a week of nerve-testing federal budget negotiations, the mainstream news media’s attention last week turned to a related but bigger issue—how to deal with the growing federal deficit, or “a new set of showdowns” according to USA Today.

After the last-minute April 8 compromise to avoid a government shutdown, some conservatives in the media were disappointed with their own side, including talk show host Sean Hannity.

“As I’m watching the weekend programs and I’m listening to some of the analysis out there, I’m a little bewildered by all of this,” Hannity told radio listeners April 11. “You would think this is the greatest victory since World War II. You know, the Republican Party—you got leadership out there, there’s a lot of backslapping going on, a lot of bow-taking and a lot of praise for their brilliance in getting the $38.5 billion deal and keeping the government open. Well, $38.5 billion wasn’t the number that we were promised.”

Obama did not escape critiques from his own camp as well. On his CNN prime-time program now entitled In the Arena, Eliot Spitzer on April 12 remarked that “the harshest critique of [Obama] comes from his own supporters.” Spitzer’s guest, Massachusetts Governor Deval Patrick, praised the president, but gently prodded him to lead more forcefully in the debate about government spending. “I think his ability to articulate what we are facing, and to ask us to reach for a big broad vision is unique in our time… I think a lot of us would like to see more of that.”

Conservative media also criticized the President for the deal. The Wall Street Journal on April 11 argued that Obama had been late to the table when it came to the larger debate about the federal deficit, saying “until now, Mr. Obama has been largely absent from the raging debate over the long-term deficit.”

In response to his April 13 speech, however, which critiqued the Republican deficit reduction plan and outlined his own, involving tax increases and entitlement protection, the tone of coverage toward the President shifted and became generally more positive, if toward his stiffened spine if not toward his policies.

On the CBS Evening News that night, anchor Katie Couric described the mixture of cooperation and aggressiveness with which the President addressed the Republican opponents. “The President said the two parties have come together before, they can do it again, but along with that olive branch, he was carrying a baseball bat.”

On the NBC April 14 broadcast of the Today Show, White House correspondent Chuck Todd said of the speech: “Well, it’s on. The President didn’t just unveil a debt plan; he ratcheted up the debate big time on this issue of what to do with the nation’s entitlement programs. And he guaranteed that the issue is going to become very contentious, and front-and-center in the 2012 presidential campaign.”

Perhaps more important was the verdict from the more liberal prime-time MSNBC talk host Rachel Maddow, who was often critical of Obama during the health care debate and who may be something of a proxy for the liberal wing of his own party whose enthusiasm would help during the 2012 election cycle.

Maddow called the speech big and “unexpectedly satisfying” in her April 13 broadcast. “Amid the nonsense, arithmetic-free rhetoric about deficits and debt, the President made the point today that historically, it makes sense to run deficits when the country is at war or when the country is in a recession, but when you are not at war or in a recession, you should aim to get back in balance.”

A less charitable critique, if more predictable, came from some on the right: Rush Limbaugh on his April 14 radio broadcast called the speech “a disgusting display. It was in no way Presidential.”

The primary Republican plan is offered by Republican Rep. Paul Ryan. While both plans claim to shrink the federal deficit by about $4 trillion over 10 years, the Ryan plan would do so by privatizing Medicare and handing over Medicaid to the states for administration. It would also make the Bush tax cuts permanent. The press saw them as the outline of what the coming presidential election might be fought over. 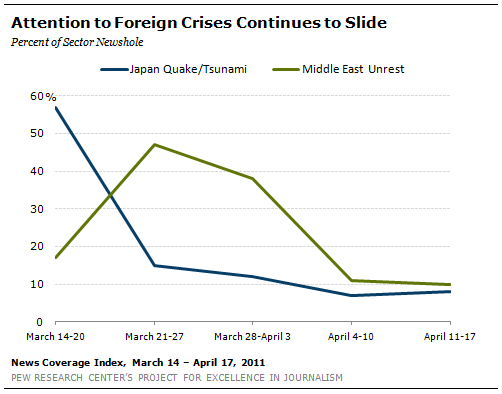 A Los Angeles Times article on April 17 characterized the dueling plans as blueprints for what is to come in the fight in Washington that may impact votes down the road. “Both the Ryan-Republican plan and the one outlined by Obama in his speech last week are opening bids in what’s expected to be a drawn-out battle along partisan lines.”

A distant second to budget-related economic issues was coverage of unrest in the Middle East (10%), most of which was focused on Libya. The chief issue in the news last week was a potential ceasefire orchestrated by the African Union and the siege by Gaddafi forces on the rebel stronghold of Misrata. Another smaller portion of the Mideast coverage was taken up with news about former President Hosni Mubarak of Egypt, who suffered a heart attack on the same day he was to be questioned by prosecutors.

The continuing situation in Japan was the third biggest story in the news last week, at 8% of the newshole. Media attention held steady from the week before (7%) despite two significant developments. Early last week aftershocks of a 6.6 magnitude rippled through Northeastern Japan even as the country tried to restore normalcy after the March 11 earthquake and tsunami. Coverage of the aftershocks quickly shifted back to the prevailing narrative, nuclear safety, when on Tuesday the Japanese government raised the alert level of the Fukushima Daiichi power plant to a 7—the same category as Chernobyl.

Several Republicans took formal steps toward entering the 2012 presidential race, including former Massachusetts governor Mitt Romney and former Pennsylvania Senator Rick Santorum. But it was another potential Republican candidate—real estate tycoon and television personality Donald Trump—who made the rounds, and the news, by stirring up widely debunked rumors about Obama’s real place of birth. Those rumors accounted for much of the attention directly on the Obama administration, at 4% of the newshole.

Trump appeared on Sean Hannity’s Fox News program talking about a team of investigators he has placed in Hawaii to look into the truth about Obama’s birth certificate. And Obama’s half sister, May Soetoro, was interviewed by Piers Morgan on CNN, where she was asked about the rumors. Meanwhile, on Wednesday, Arizona lawmakers passed a bill requiring presidential candidates to present a birth certificate in order to qualify for the state ballot. Together, these items brought renewed attention to a vexing theory that resurfaces seasonally as talk show fodder.

The No. 5 story of the week, at 3% of the newshole, was a series of some 200 tornadoes that began on Thursday in Oklahoma that killed at least 45 people and caused millions of dollars in damage.

There was no question that Barack Obama loomed as the key newsmaker last week, mostly due to his nationally televised speech. That marked a change from recent weeks, including several where Obama was not the top newsmaker (Col. Gadaffi was the top newsmaker during the weeks of February 21-27 and February 28-March 6).

The No. 2 newsmaker last week, Egyptian President Hosni Mubarak, was a key figure in 2% of stories—the first time he ranked among the top five newsmakers since the week of February 7-13, when Mubarak left power in Egypt. Mubarak was hospitalized after experiencing a heart attack.

Next was Paul Ryan, at 1% of all stories. Ryan’s budget was passed by the House of Representatives at the end of the week, effectively anointing it as the official negotiation starting point of the GOP for the ongoing debate over federal spending.

At No. 4 was Donald Trump, whose potential candidacy got a boost from his perseverance in insisting there were troubling questions to be answered about Obama’s citizenship.

The No. 5 newsmaker was Lashandra Armstrong, the mother who drove herself and her children into the Hudson River in an apparent suicide (one son survived the ordeal and swam to shore, alerting authorities).

Finally, tied with Armstrong as lead newsmaker in 1% of stories, was Gaddafi, who continued to overpower rebel forces in a Libyan state that increasingly appears to have resisted the humanitarian efforts of NATO forces.